Last weekend was the Expo Narrow Gauge exhibition. As is often the case I was volunteered to help the Sussex Downs 009 group with the 009 society show-case and demo stand, but also group member Martin Collins had his 009 Llandecwyn layout, so I spent a while helping with that too. I took along my part-built society challenge layout as a demonstration, which generated some discussion, it even got operated from time to time.

Martin had just completed a "Clyde puffer" coaster for Llandecwyn, a nicely built and detailed model that sits well on the layout. 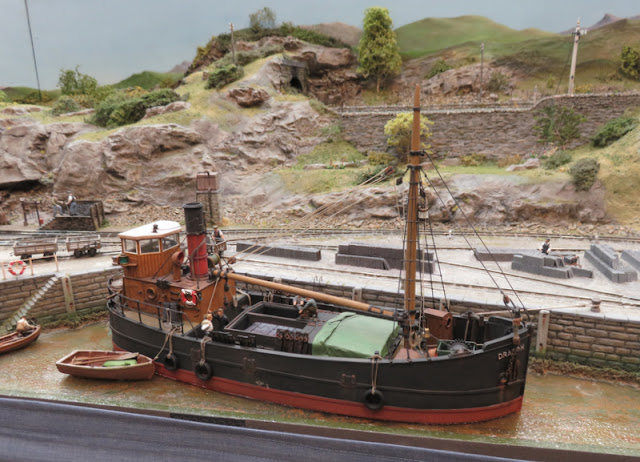 I'd been looking forward to seeing Sandy Shores (009) by Jamie Warne, having seen it develop on the NGRM forum. It's a different, imaginative, and really attractive layout that oozes atmosphere, despite it's small size. It's well modelled and presented too. 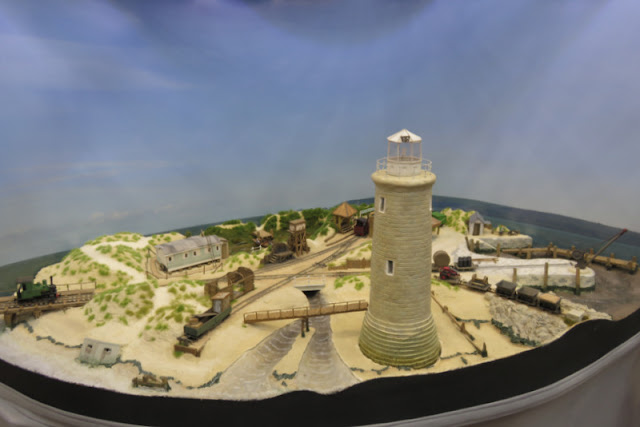 I had the pleasure of operating for a while to give Jamie a break, and loads of people commented on how they liked it. In fact I really wasn't surprised when Jamie was awarded the Reinier Hendriksen Trophy, as it was clear this was a layout that followed the spirit of Reiniers work. That's a real accolade and well deserved, congratulations Jamie! 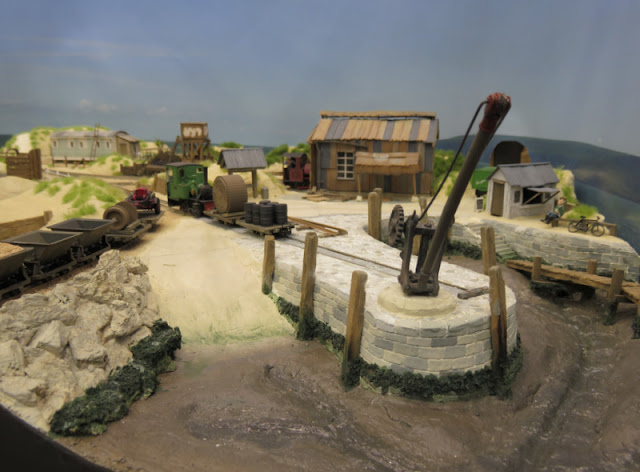 As usual Expo-NG had a wide variety of excellent layouts, and I can only show a handful here. Another favourite of mine was East Works (009) by James Hilton, another small, attractive, and well presented layout but in this case a delightfully simple one, inspired by the Isle of Purbeck clay mining railways. 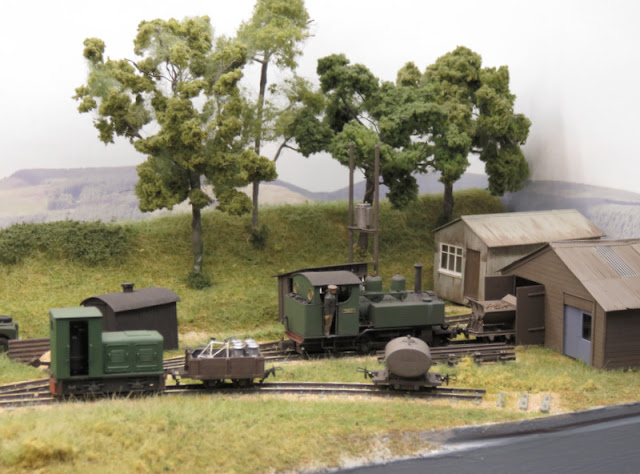 Charles Insley is a serial layout builder whose layouts have a delightful charm. Ulvaryd Strand (HOe) is the latest, a Swedish lakeside setting. 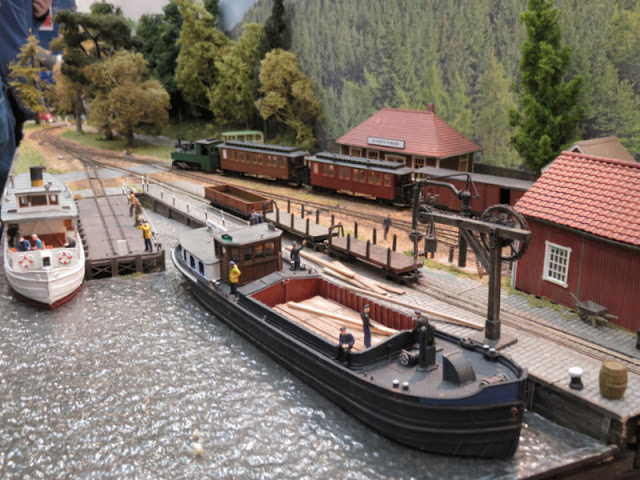 Derwent Road (O9)by Bill Flude is a little different, depicting a sand quarry line which also sees tourist trains operated by a preservation group, and passes alongside newly built houses (1970's). If that sounds familiar it is inspired by Leighton Buzzard. 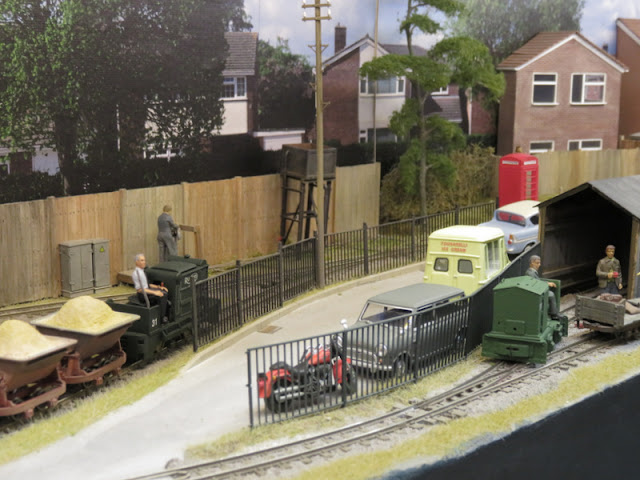 David Malton's lovely Abbey Light Railway (O14) appeared at Expo-NG for the second time, this time extended with the loco shed end of the line. The first time 5 years ago I lent David my green Hudson Hunslet to supplement his then limited loco stud, as it was his first exhibition with the layout. Now he has plenty of locos, having modelled all of the locos of the prototype, but thought a reunion would be appropriate. 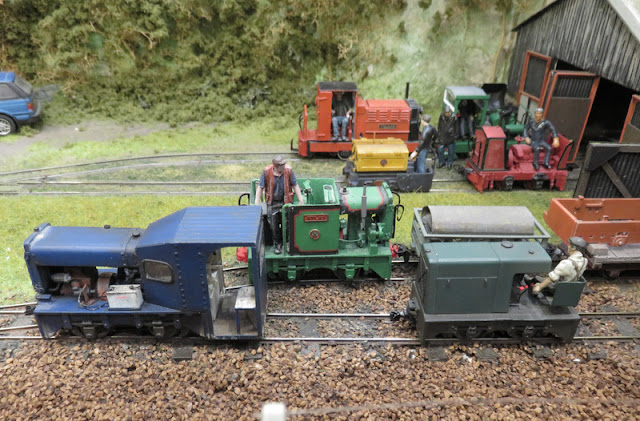 So above we have my green HH on the right, plus on the left my blue "Thakeham" modified older-style HH. Between them David's model of the ALR's Hudson in near original condition makes an interesting comparison, while an interesting collection of motive power sits outside the shed.

At the other end of the line we have a Lister line-up, my "standard" Lister in the foreground makes an interesting comparison to David's modified ALR Lister, which had a new engine fitted centrally as well as a modified cab. However while the locos may not be "twins", the drivers appear to be! 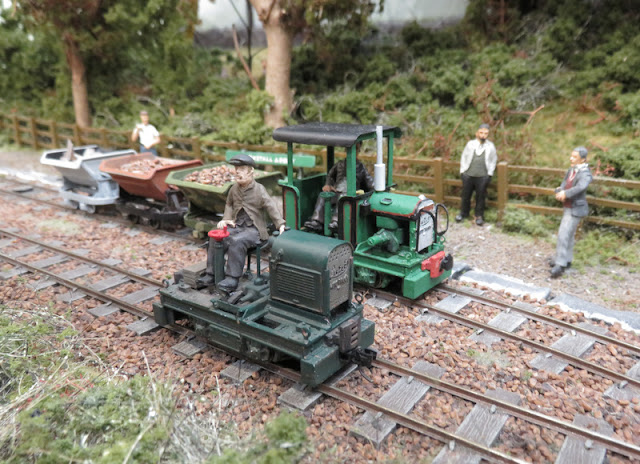 So once again Expo-NG proved to be a thoroughly enjoyable day, not just for the layouts of which this is just a few, or even the trade and sales stands, but also for the people - I spent a lot of time chatting! If you'd like to see more photos of the layouts click here.
Posted by Michael Campbell at 23:46