I have two "power-pack" boxes for my layouts, a large one and a small one, and when I take a layout to an exhibition I take both in case of failure - though it hasn't happened yet! However with two layouts going to Uckfield I wouldn't have a spare. The large box was always intended to hold a second transformer, but I had never needed to fit one - well now seemed a good time. 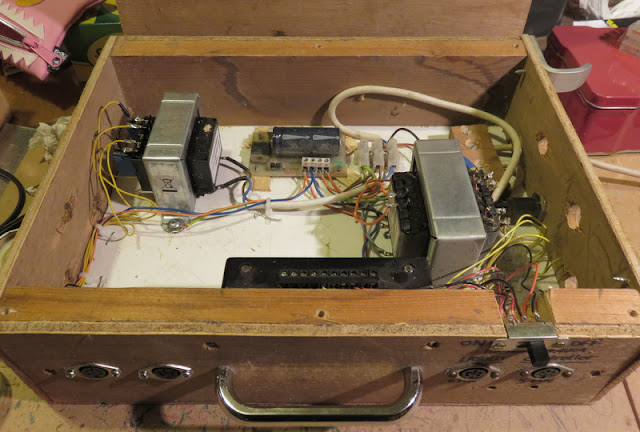 Inside you can see the original transformer on the right - made by AMR it has two 16 V AC and a 24 V AC output, the latter is used for the capacitor discharge unit (CDU) for point motors seen at the rear. One of the 16 V AC outputs is used for a hand-held controller which plugs into the box, the other provides power to accessories and also the high-frequency track cleaner seen in the foreground. The new transformer is fitted rear left, it's a Gaugemaster T1 with two 16 V AC outputs allowing a second controller to be powered. Note the circuit breakers directly fitted to the outputs. The track cleaner has two outputs and could be wired into the second controller, but since adopting graphite it is rarely used so I haven't bothered.

So two controllers can be plugged into the box by 5-pin DIN plugs, and two 6-way DIN outputs each provide the controller output, 16 V AC for accessories, and the CDU output for point motors. Some years ago I posted the schematic below: 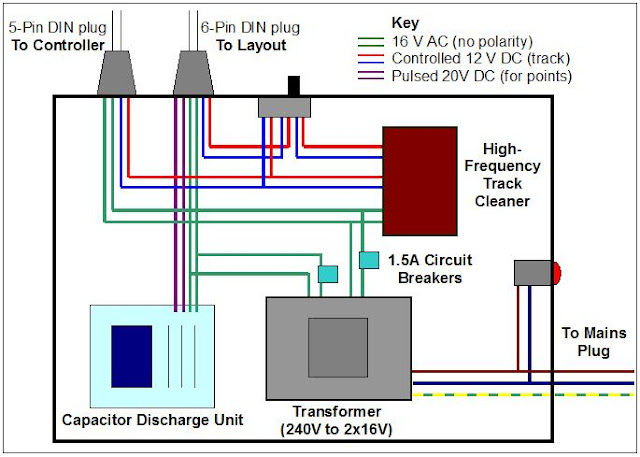 The new transformer effectively duplicates this circuit with a second transformer, controller, and output, except that there is still only one CDU feeding both outputs, and I've not bothered to wire the track cleaner to the second controller. It can thus power two layouts, or one layout needing two controllers. 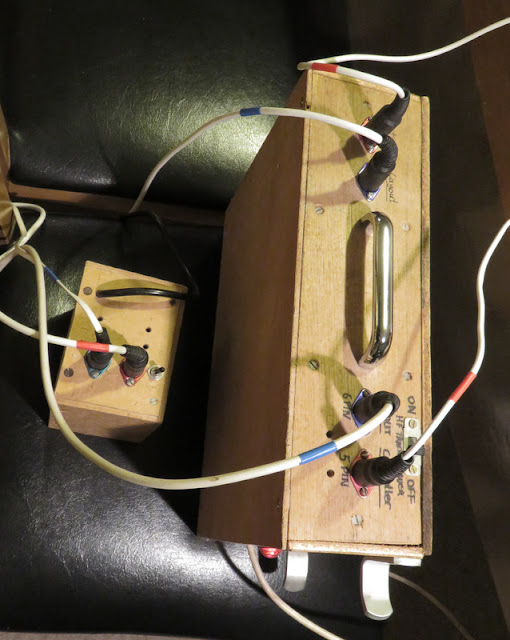 Here are both power-pack boxes together. I made up a new 6-way lead to connect to the layout, my spare was made from single-core telephone wire and I'm amazed it hasn't broken already - so now I have 3 leads. I've also adopted a colour code to make plugging in quicker and easier - blue is the layout connection, red is the controller, tape on the cables and sharpie pen on the sockets.

The small box contains a single transformer (2 x 16 V AC) and a high-frequency track cleaner, providing a single controller and accessory supply in a small package ideal for micro layouts. Until now my small layouts have mostly had manual point control so there is no CDU, but I'm thinking of adding one if it will fit, or removing the rarely used track cleaner to make space. 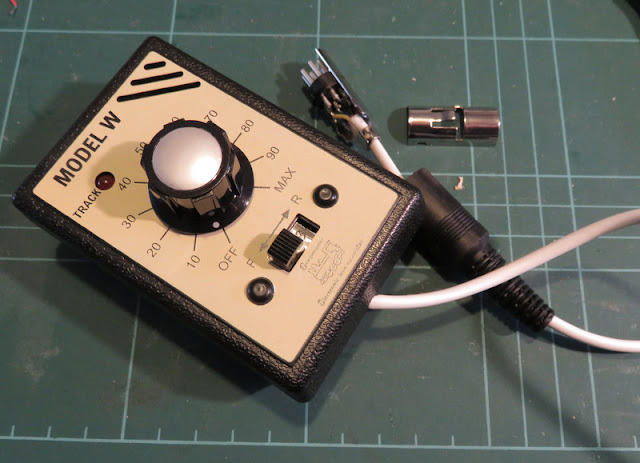 As well as the new transformer I have a new controller, a Gaugemaster W. Unlike most of my other controllers this is not a feedback type or pulsed output controller, but simply a smoothed DC output, and so is ideal for coreless motors which are becoming more common. Initial tests show it doesn't have good slow speed control - at least of conventional motors - which I expected, but also it didn't maintain a steady speed, so it doesn't seem as good as my other controllers. However it may be better with coreless motors and safer for continuous running. 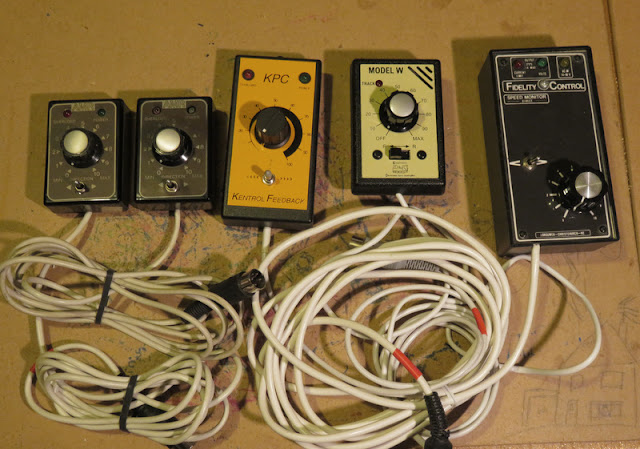 As you can see I now have quite a collection of controllers. As well as providing a choice of controller type depending on layout and loco type, it means I can always have a spare available for a show. This proved useful at the last Wealden group show when a broken wire caused issues, easily fixed but not something you want to address at the show!
Posted by Michael Campbell at 23:27