I mentioned in an earlier post that there wouldn't be much modelling this summer due to redecoration of our lounge-diner. That involved rewiring, wallpaper stripping, plastering, painting, new carpet and some new furniture units - and no, I didn't do all of that myself but the disruption has lasted weeks. However, it's now all finished and I have been able to set up my bookshelves and the layouts again at the end of the dining room. 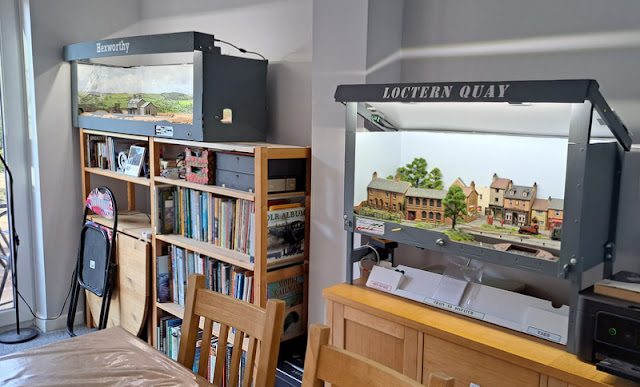 A little rearrangement has meant I've been able to extend the Ikea IVAR shelf from 1.5 to 2 bays, about 6 feet. I retrieved a folding desk for it from the garage from when the shelf unit was shortened after the kids were born, the desk gives a little workbench space when needed and I've fitted another shelf under the desk for useful storage too. Hexworthy is back on the shelving unit but the pillar means the "domestic" fiddle yard won't fit, so I'll have to make a new fiddle yard for home use stepped to fit around the pillar. Landswood Park is in the box-files underneath, and Loctern Quay sits on its short legs on the sideboard.

I'm fortunate that my wife tolerates my layouts and railway stuff in the living room, and it's nice to have them on display and available for use, but it does mean they have to be made presentable and kept tidy. Now things are back to normal modelling should be able to restart soon - but don't expect much before what's left of summer is over!

Posted by Michael Campbell at 12:53 2 comments:

Back at the Narrow Gauge South show in April I was given a copy of the new 009 Society Handbook. This is now the third edition, it has been over two decades since the second edition and the first was published around the time I joined the Society over 30 years ago. I found it a useful reference then (my copy looks rather dog-eared), and I hope the new edition is just as useful to 009 modellers now - especially those new to the scale. This edition is a thick spiral-bound A4 book illustrated throughout in colour, and covers topics such as DCC and 3D printing as well as the age-old challenges of track laying, wiring, couplings, scratch-building, and even exhibiting your layout. 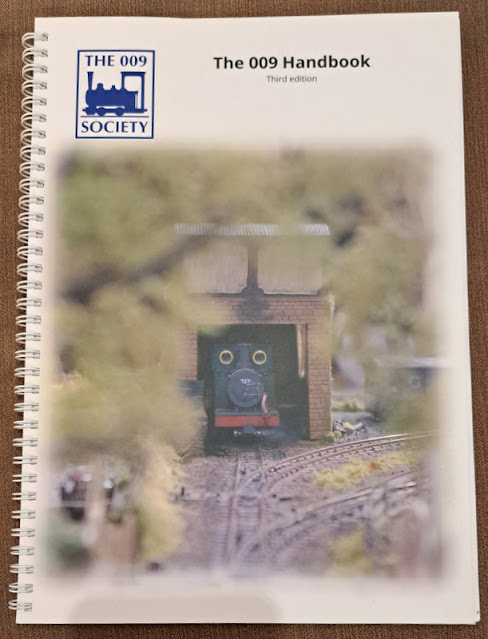 The reason I was given a copy was because I had contributed a section on how to model inset track, using my experiences from building Loctern Quay and Slugworth which used different techniques, along with a short description of how the prototypes do inset track. 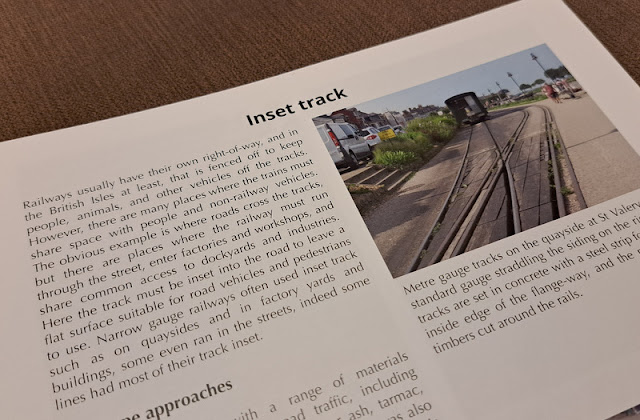 The 4-page article includes lots of photos which I'd used on this blog, so I was able to illustrate the processes. 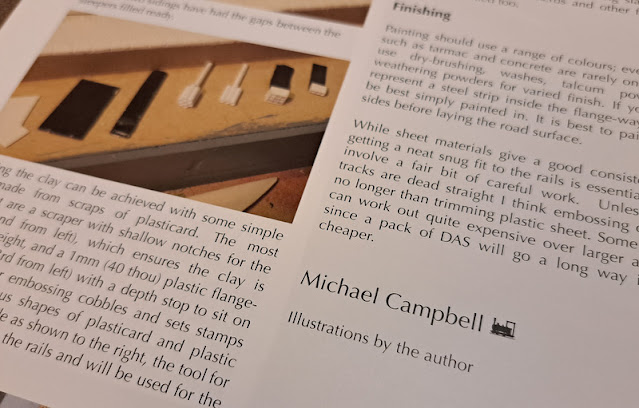 As well as the article I'd provided, some of my photos were used in a couple of other sections written by Richard Glover, one covering different types of fiddle yards showed the "easy cassette" system I used on Awngate. 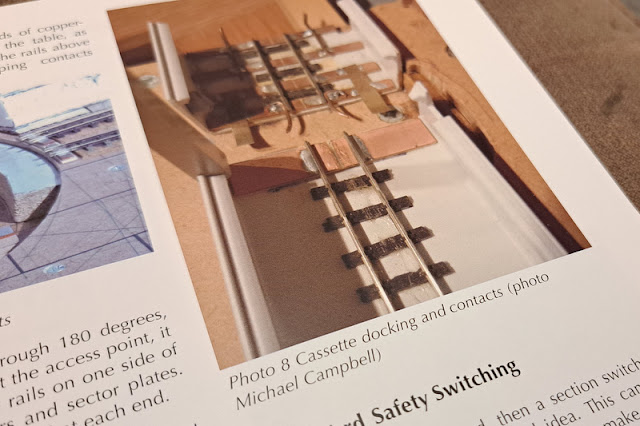 Another section on micro layout design featured photos of my Southon Yard, and Joshua's Slugworth & Co., both of which were EXPO-NG competition winners. 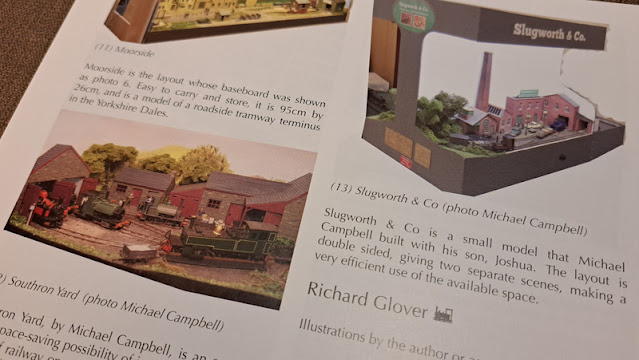 I have to say it's a real honour to have input to this handbook alongside many well-known modellers, the works of some of whom were an inspiration to me when I started in 009, or over the years since. The format of the handbook may look similar to the original, but it has been thoroughly updated with new content and covering new topics. If you model in 009 it is well worth picking up a copy from the Society sales.

Posted by Michael Campbell at 21:26 No comments:

A social gathering with trains

Last Sunday I joined a gathering of modellers to socialise, discuss models, and occasionally run some trains. I took along Loctern Quay but didn't spend a lot of time operating it, though a few others had a play. The shunting puzzle does draw people in. In fact, mine wasn't the only 009 Society competition inspired layout there. 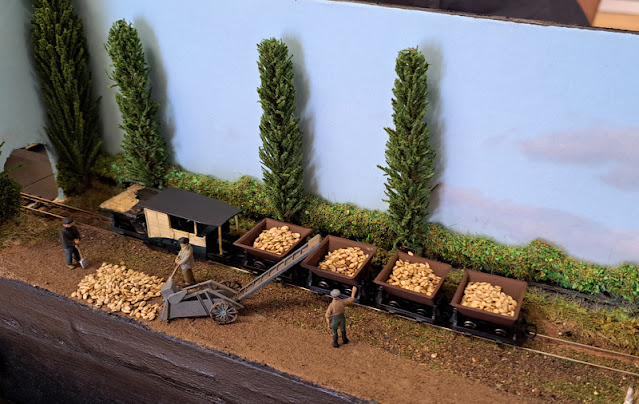 Richard Doe had brought his model which used the same baseboard modules as Loctern Quay, although it wasn't completed in time to enter the competition. In front of the fiddle yard a train of skips is loaded with sugar beet, with its unusual lightweight "home-made" loco. 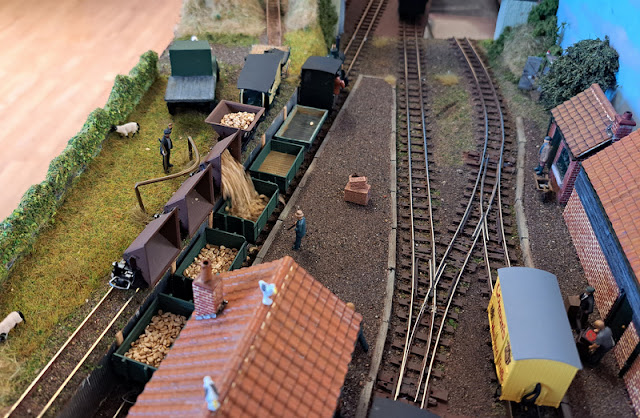 Over at the station end the skips are tipped into waiting wagons. Nice to see another layout built in the same constraints, and yet with such a different theme. 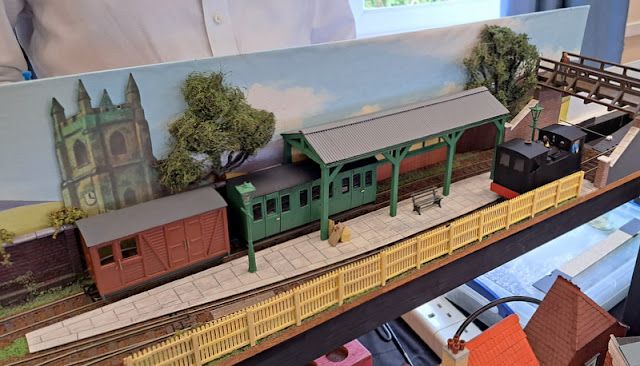 Greg Dodsworth built this long narrow layout to fit a windowsill during lockdown. It's simple but nicely done, and what a great use of a windowsill? The push buttons on top of the backscene operate the points. 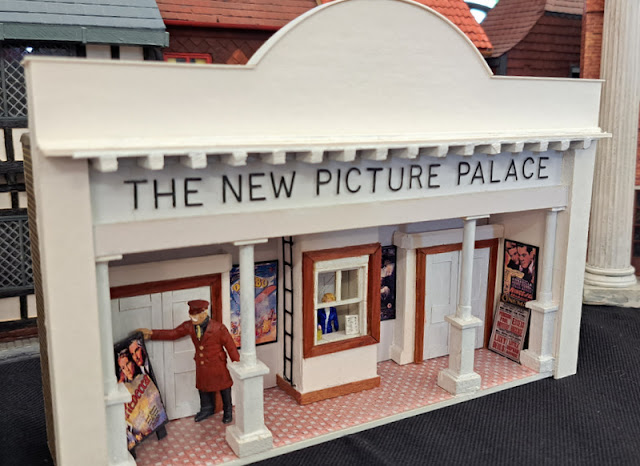 Greg also showed some larger scale buildings including this cinema, modelled on the Ultimate Picture Palace in Oxford it brought back memories from my student days. The little cinema showed unusual and cult movies, and when the attendant had finished selling tickets from the window they climbed the ladder to the projection room. 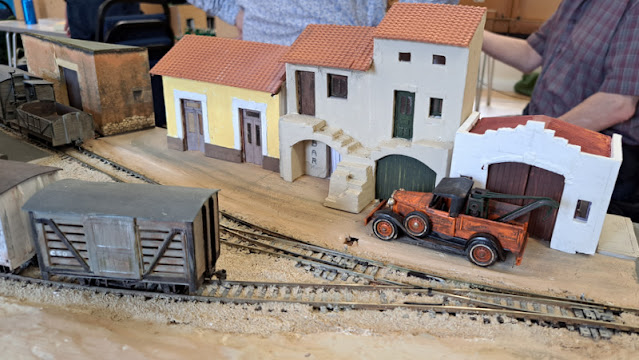 Giles Barnabe brought this little On30 terminus layout set on his fictional Latin American island of Isla Blanca, which he'd only started building about 3 weeks previously. It may be unfinished (a backscene would help photography!) but it is clear it will have character. 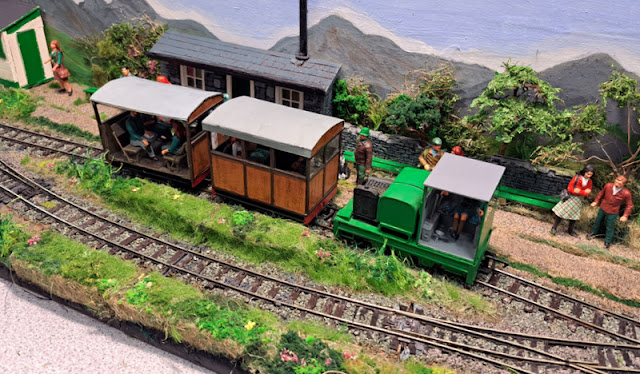 Ian Roberts had his 1:32 scale 16.5mm gauge layout based on the Dalmunzie railway. I had seen it before but I do like it, the rolling stock is modelled on that of the prototype. 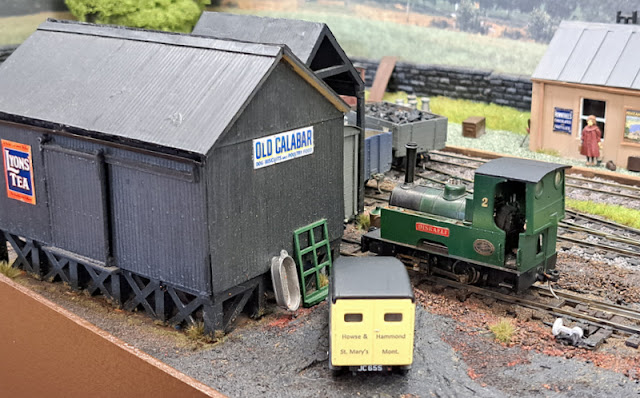 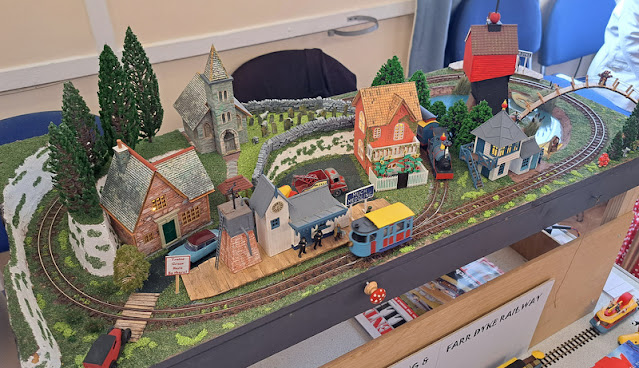 Chris O'Donoghue had his whimsical layout Much Meddling and Farr Dyke Railway.

That's a selection of the little layouts that had been brought along, but the event was more about socialising than the layouts! It was nice to meet old friends and new faces.