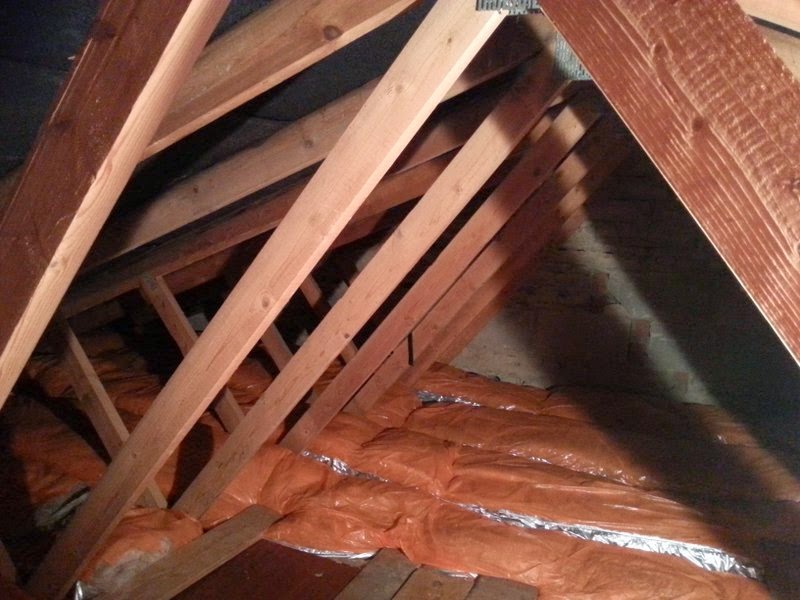 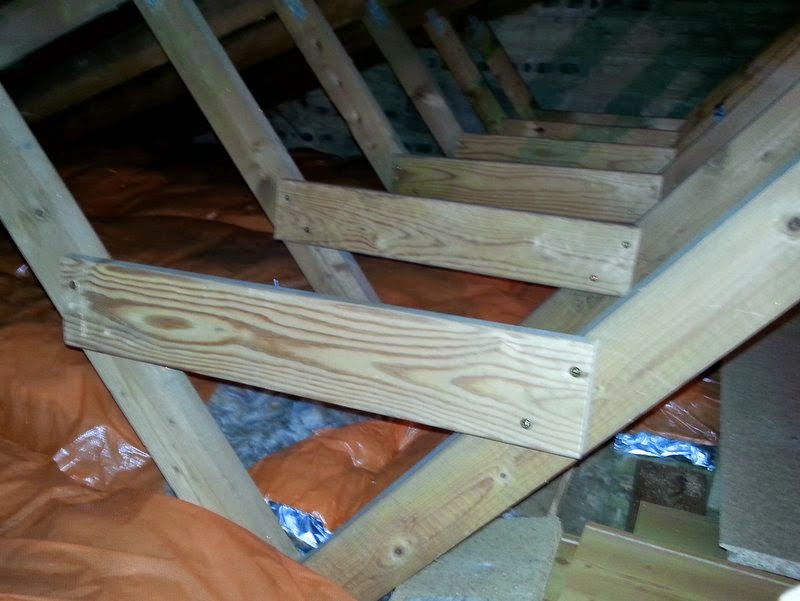 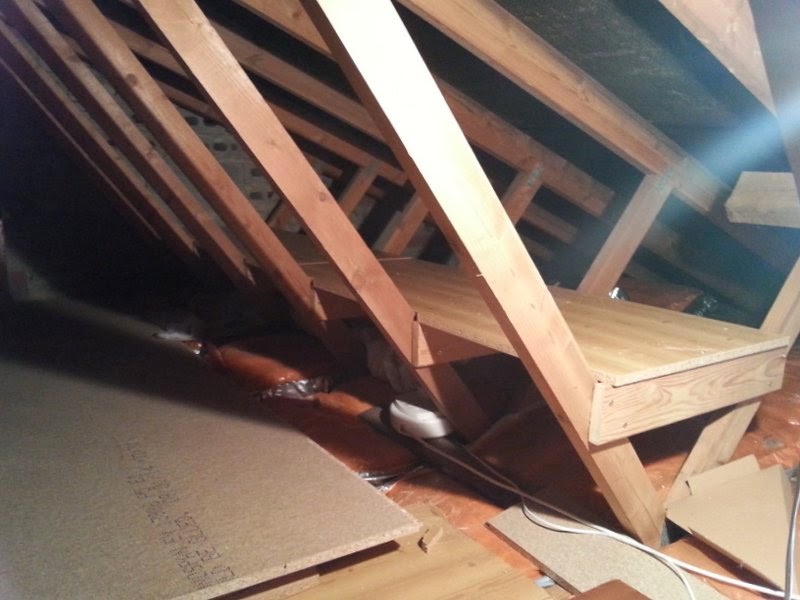 Now I suppose this space could be used for a model railway, but it isn't really ideal. Apart from the temperature variations, poor light, limited space for humans, and the difficulty of getting any layout in or out, it isn't a sociable place to be! Nonetheless it will help by allowing stuff to move out the garage (you know, Christmas decorations, spare bedding, all those railway mags and anything else that probably isn't needed but isn't ready to be thrown away), meaning perhaps one day I'll have enough space there to build a layout!
Posted by Michael Campbell at 13:46 No comments: 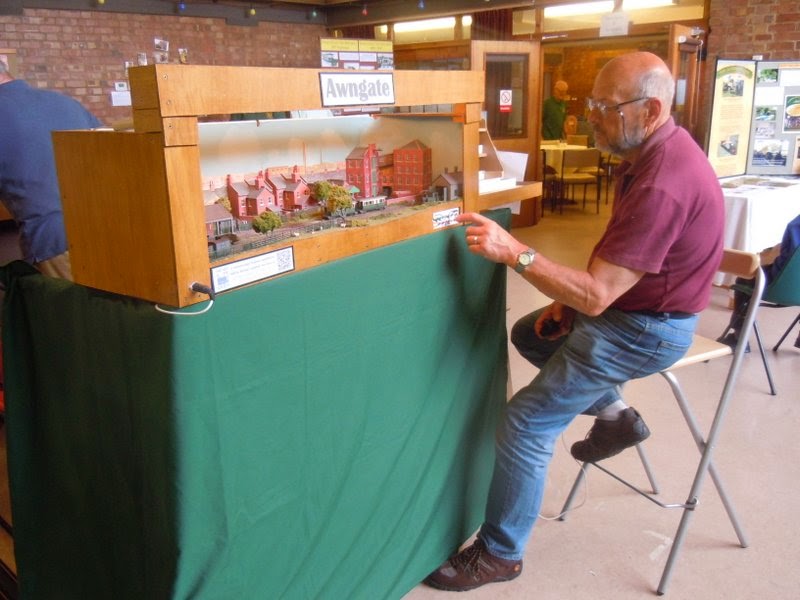 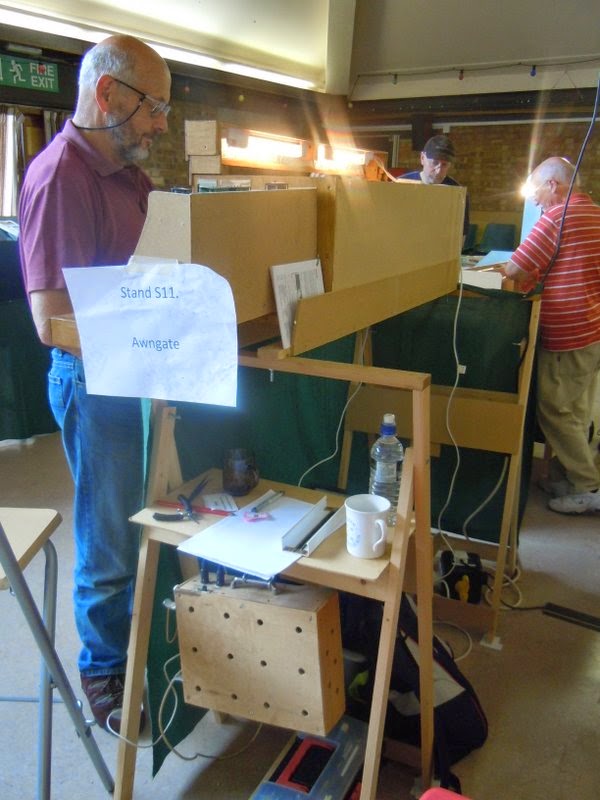 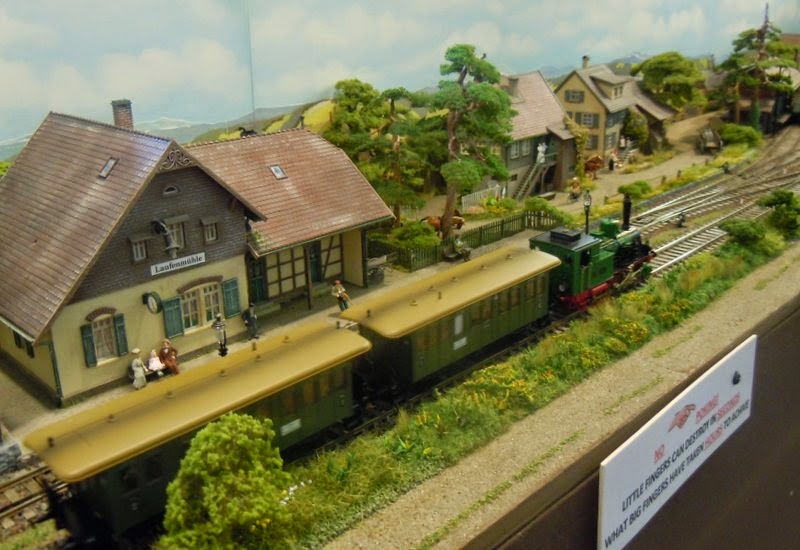 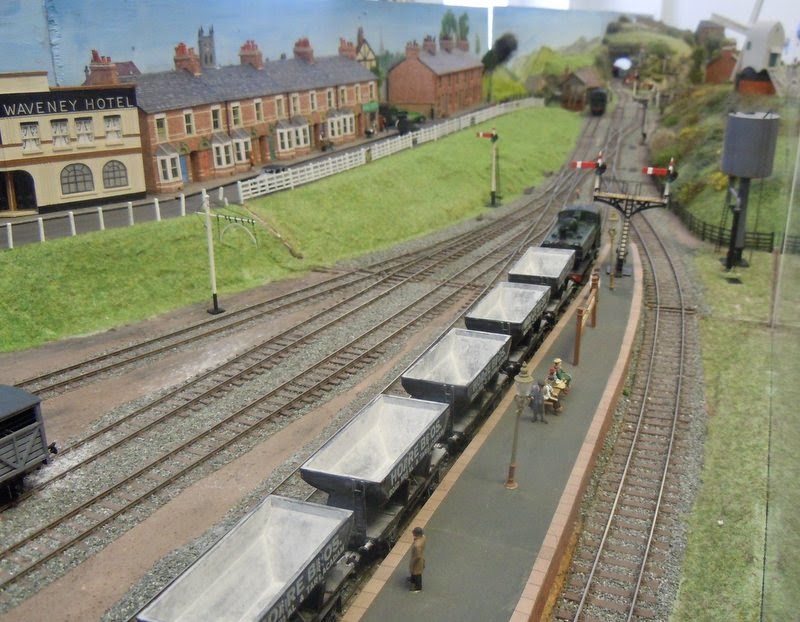 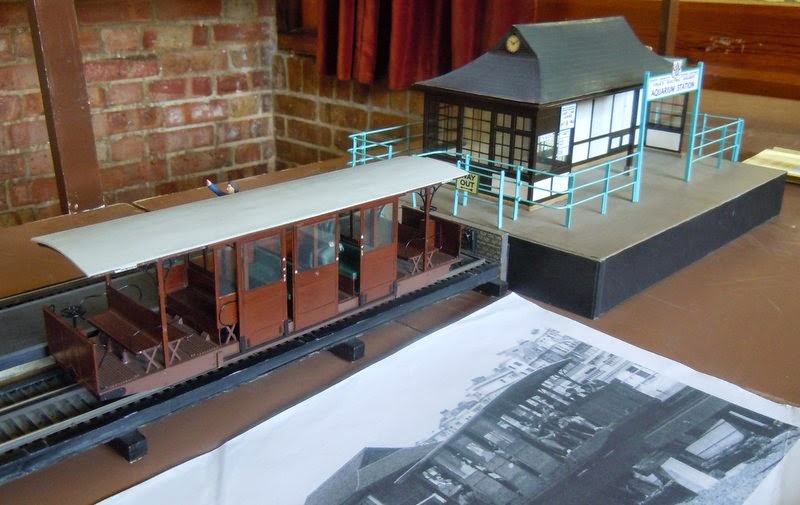 This model of the Brighton Volks Electric Railway in G1 is often seen at local shows, the models are very fine and there interesting displays about the prototype, though I think it would be nice if a little more scenery were present as the 36' length is mostly table-top with a track on it.
Posted by Michael Campbell at 17:33 No comments:

I heard about the Chemin de Fer de la Baie de Somme through an NGRM forum posting, and once we'd decided our holiday this year would be in Northern France I was determined to pay a visit. The meter gauge railways around the Somme estury towns opened in the late 19th centruy and a fair milage has now been preserved. We took the train from St Valery sur Somme to Le Crotoy via Noyelles sur Mer, there is also a branch to from St Valery sur Somme (though not at the same station!) to Cayeux sur Mer. 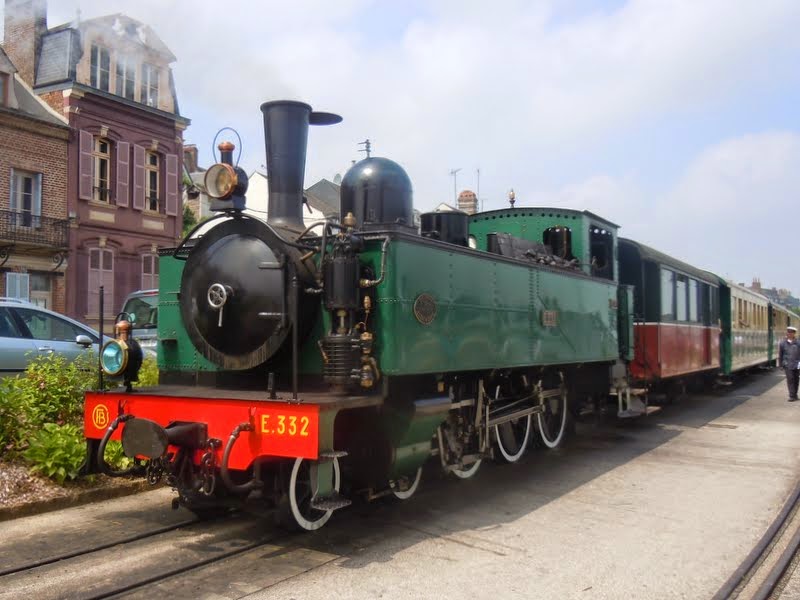 Waiting for us at the quayside station in St Valery is this elegant locomotive with a train of bogie carriages. It's a 230 (or 4-6-0) tank engine built by Cie de Fives-Lille in 1909, quite a big powerful beast.  It seems we picked a bank-holiday weekend to visit and the trains were crowded, parking was a nightmare, and they really need more than one toilet at the station! 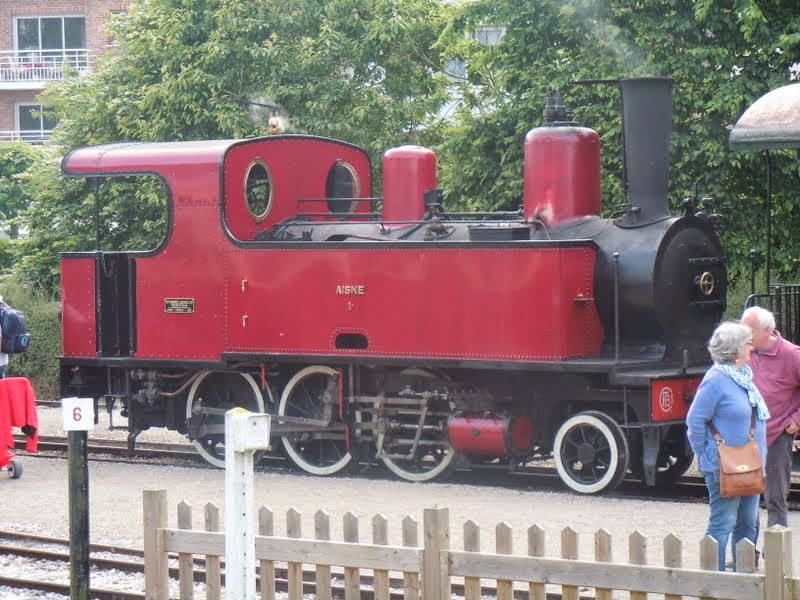 A couple of hundred yards down the line we passed the "town" station which serves the branch to Cayeux sur Mer. It is timetabled to be run by railcar or diesel but, perhaps due to the bank holiday crowds, this delightful 2-6-0T (130 in French!) Corpet built in 1906 was on duty. 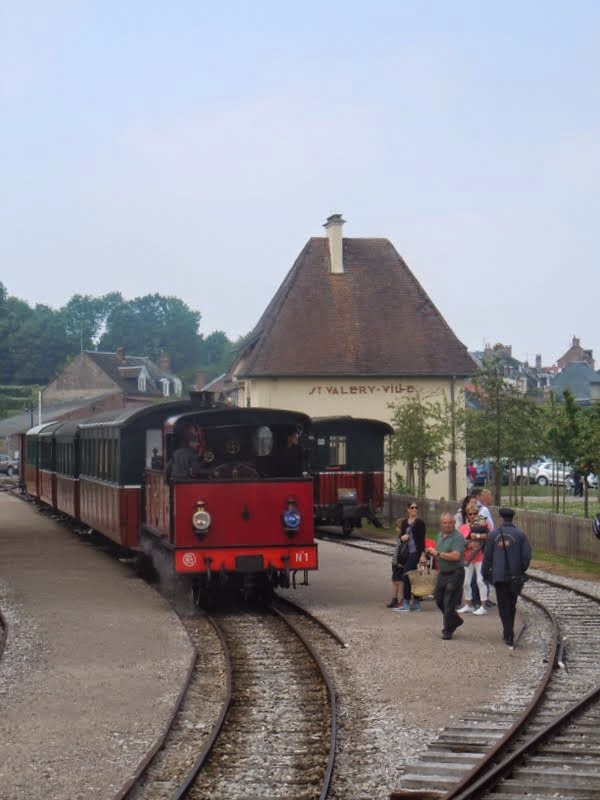 Noyelles is the junction with the SCNF main line, and also the mid-point passing station of the line from St Valery to Le Crotoy. It is also a terminus, and trains from both ends of the line reverse here. Looking back as we left the train to St Valery can be seen departing over the scissors crossover, the tracks run parallel for a few hundred yards. The far right track is dual gauge, standard gauge rails straddle the meter gauge, this runs all the way from Noyelles to St Valery. 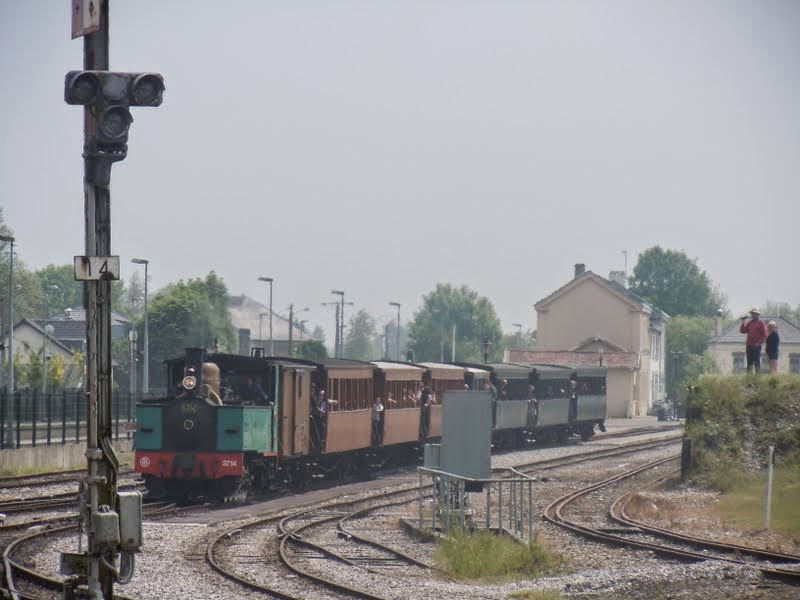 At Le Crotoy the loco takes on water by the shed at the end of the line. The main depot and workshops are just outside St Valery, but the trains start from both ends. 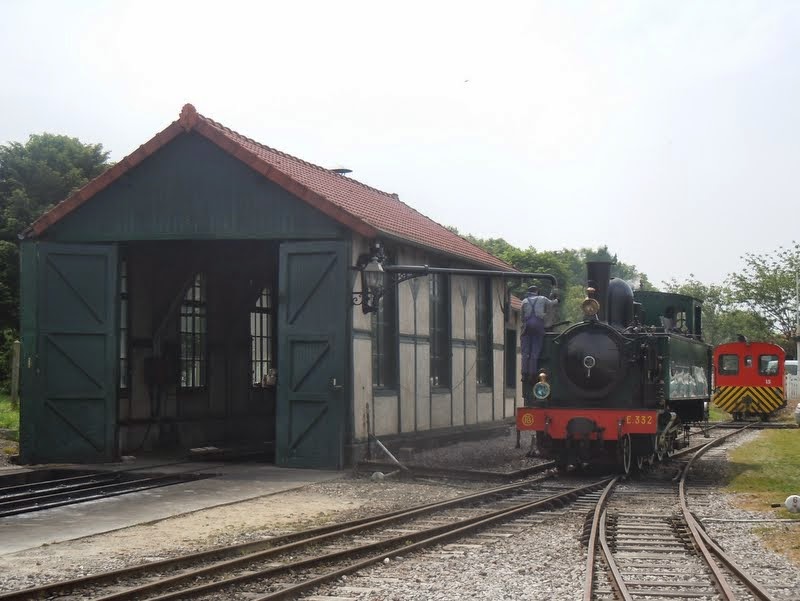 Leaving Noyelles on the return journey the two trains, having reversed in the station, depart in turn then the second overtakes the first. This appears to be "stage managed" to allow passengers to see the other train, and just for the fun of it! The locos have swapped trains during the proceedings, perhaps to get back to the correct shed for the night? 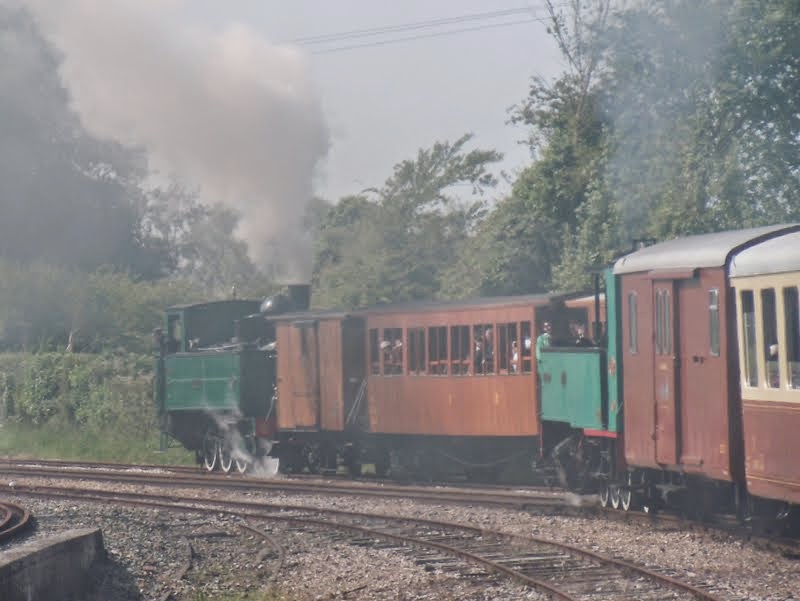 Back at St Valery the loco is turned on the inset turntable on the quayside, in front of the station building, which also acts as the release to the loop. The turntable is electrically operated from a control panel (near the parking meter on the left). I don't really know why they bother though as this is the only turntable on the line! This loco is a Buffard 031 (0-6-2) of 1910, and was designed to run cab-first for visibility on and by the road. 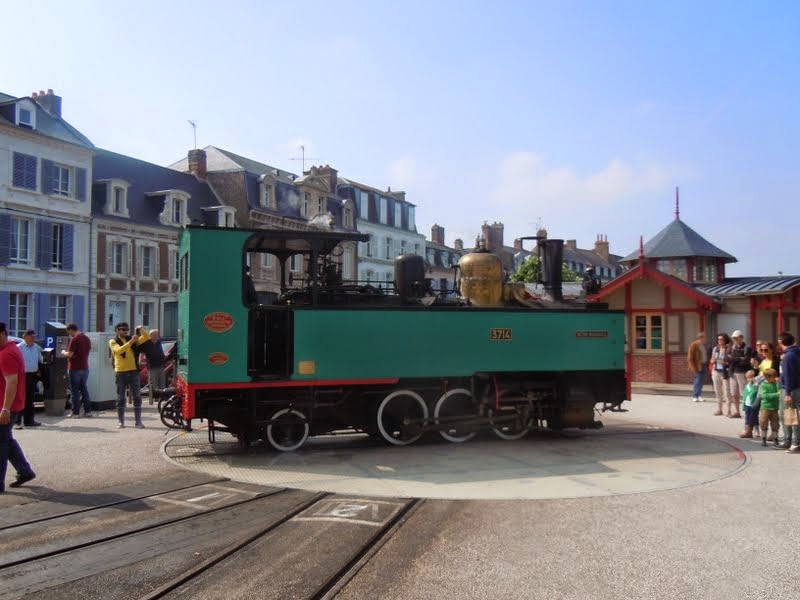 Despite the crowds we had a great trip, the locos and coaches are beautifully restored and kept, and it's a nice ride. For more pictures check out the album. If you are in the area (it's only an hour from Calais so even possible on a "day trip") this line is well worth a visit.
Posted by Michael Campbell at 23:05 No comments: