Once I'd done the prep like modifying the coupling pockets the rest of the Hudswell Clarke kit came together quickly. Assembling the cab is a little fiddly, but otherwise it is straightforward. However I did struggle with the roof; the kit has tabs on the top of the cab front and rear that fit half-etched slots under the roof, but I found the slots further apart than the cab was long and the slots too shallow for the tabs. In the end I filed the tabs off altogether, and resorted to another method of aligning the roof - soldering small tabs of phosphor-bronze (it was the thinnest metal I had) to sit inside each edge. For now the roof is loose for painting but they should help to glue it in place when the time comes. 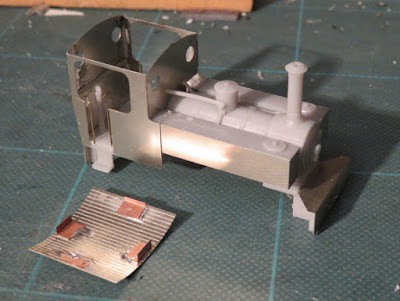 The kit is well detailed as supplied so there's not much to add (I've left brake pipes off for painting, and mine is vacuum braked so I've not fitted the air brake pump). I did notice it was missing handrails so fitted some to the cab, through drilled holes in the floor (would have been much easier if I did that before fitting the cab!) and glued the tops to the inside of the cab sides. I guess I could fit a smoke-box hand-rail too? 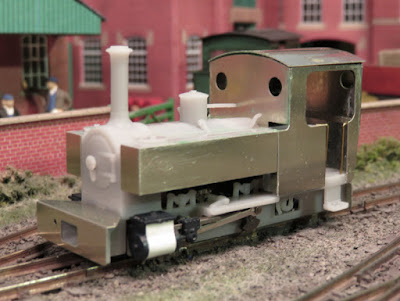 I was left with a few small gaps - at the cab edges, the holes for the fuel rails (I didn't use) on the tank top, and the etched grooves under the cab roof. Nothing a spot of filler couldn't resolve. The final task was to do something with the American style cylinders of the Minitrains chassis - photos of Hudswell Clarke locos had European style smooth (lagged) cylinders. In the end I cut a strip of 10-thou plastic to fit between the flanges and secured it to the valve chest side and around the cylinder. I'll see how this looks with a spot of primer on, it may need a little filler too. 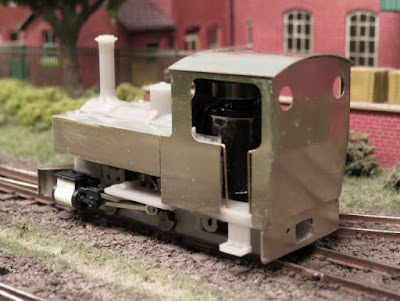 Other than cleaning up, and perhaps metal blackening, it is ready for primer. That will wait for warmer weather though. However I do like the look of the loco, chunky and elegant. One thing needs looking at though - it runs with a whine, I think the flywheel is rubbing on the cab front...

Back at EXPO-NG I picked up the new Narrow Planet Hudswell Clarke kit, and thinking it would be a quick and easy build, I made a start. It's in their usual style of a 3D printed core with etched nickel-silver overlays to get a good quality surface. However Christmas preparations and family distractions soon got in the way and it was only a week or so back that I actually made any progress. 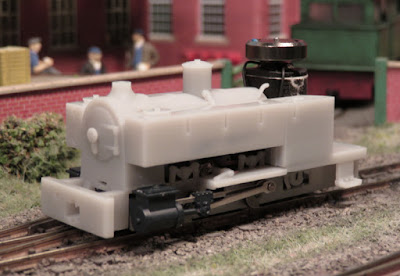 The first step is to cut down the chassis and replace the outside frames with those in the kit. At first this appeared to introduce a bind to the running, though I could not see a reason. A bit of re-fitting and it has gone, I think drooping pistons were to blame and the con-rods catching the fly-cranks, I've fitted a piece of plasticard over the cylinders allowing the plastic screw to hold them level better.

Next the boiler and side tanks were stuffed with lead - I use sheet roofing lead offcuts which meant cutting into little strips and feeding in from the cab end with tweezers. The "liquid" (balls) variety might have been easier to pack in but isn't as dense as real lead, so overall I've probably achieved the same weight - it's adequately balanced the motor at least. I even cut a piece to fill that void under the front footplate. 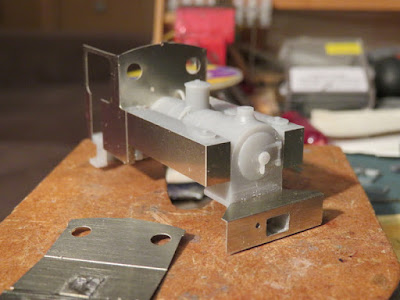 I had to open out the coupling pockets to fit Microtrains couplings, requiring an evening with small files and an abrasive bit in the mini-drill, going carefully to avoid damage to the print - especially where the rear pocket is used to locate the body to the chassis. So after several evenings work with little visible progress it was good to be able to start sticking body panels on! At this point I had to make decisions - the kit is rather like a "Vari-kit" with two styles of cab, and two shapes of side-tank, as well as other details. I chose the enclosed cab (more suited to the UK) with straight tanks and without tank-top fuel rails (for wood or cane). 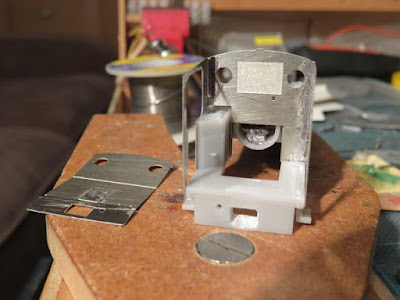 The Nickel-Silver cab etches can be glued but are recommended to be soldered for strength, yet that frightens me as there is a risk of melting the printed core. I soldered the right-side to the front off the model, holding the parts together with magnets, then fitting them before soldering the left-side on. The cab rear and buffer-beam have been soldered together, after the photo was taken they were superglued to the buffer-beam and when that is solid I'll solder the top corners together. A line of flux along the join with some tiny pieces of solder on it, dabbed with a quick touch of the iron, seems to be the safest way to go.
Posted by Michael Campbell at 14:02 No comments: