I realise that for most of the country the digital TV switchover has long gone, but it has just happenned here. And as well as the BBC confusingly moving us East overnight (from "South" to "South-East"), it has spelt the end for my trusty old TV.

I bought this second-hand for £60 from Granada Rental when I was a teenager, it looked dated then so I reckon it is probably at least 25 years old. But it worked and was in daily use (in our kitchen diner, I won't pretend it was our only TV!) until the switchover. Now not only does it not have an analogue signal to find, as it has no Scart socket let alone HDMI or whatever, it has no way of getting a picture!

I did have a set-top box that it could be tuned into, but when asked to retune after the switchover the (also rather old) digi-box scrambled itself and now won't respond. Newer digital tuners seem to rely on Scart. So a perfectly functional TV is rendered useless... I wonder if any museums are interested? 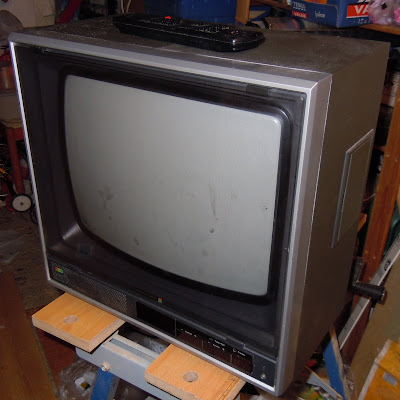 While our working TV became oblsolete, our laptop which was not in my view in any way obsolete, stopped working. It would appear the hard drive has failed. 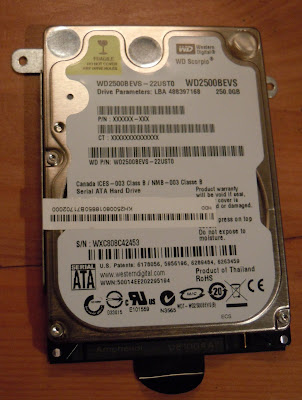 The trouble is that hard drives are quite pricey at the moment, and I'm not sure I could get it all working again. Now how much is it worth spening on a 3-year old computer? So on Monday evening I was kicked out the house and told not to come back without a new one ...

So what, you are thinking, is the point of this post, apart from my whining? Well, these issues have distracted me from useful modelling the last week or so. Hopefully I'll be back on track soon.

Son and I paid a visit to the Arundel show put on by the Wealden Railway Group. It's only a small show, in a small scout hall, but with an excellent selection of small layouts, most of which are rarely seen in public. What's more it is friendly (if a little cosy in that small hall!) and the entrance fee even includes a hot drink. Good stuff! It was nice to chat to Chris of Wood End fame, while Son tested the robustness of the switches on his layout Rhiw.

Anyway here's a selection of pics from my camera. You can see the rest here. My son took some on his Kiddizoom camera too, but they were a bit blurry!

Posted by Michael Campbell at 23:59 5 comments:

I had left the track unballasted and the ground uncovered but for a bit of paint where the loco shed was to go, but for EXPO I thought it needed disguising, and so gave the area a covering of static grass and some foliage for an "overgrown" look. Of course now that means clearing all that away, and getting the ground as level as I can! You can also see that I have opened up a hole in the sky behind the shed... 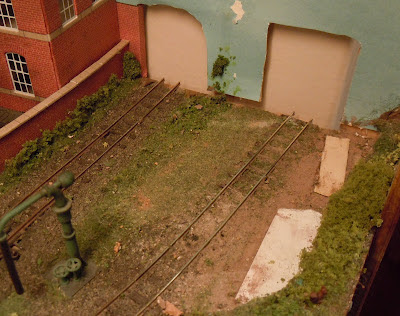 The ground doesn't need to be too tidy as the shed will have a cement floor, I've used card for this as it has a little texture, plain plasticard can look too smooth. As you can see it has been cut to fit within the building, and right up to and just below the top of the rails, it is not yet stuck down so I can paint it first. I need to check clearances on the strip between the rails, and I may put in an inspection pit - well, only down to baseboard height, but painted black and inside the shed no-one will know! 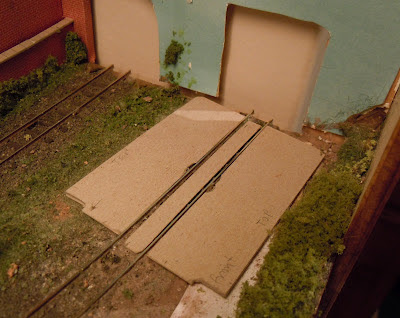 The shed is pretty much ready for painting now. I've added the flashing to the roof using tissue paper, although as it has gone pretty much see-through it is hard to see here. The corners of the lap-boarded walls have a trim strip. A door-frame has been added, and of course I have made the doors. No, they aren't fitted yet either! I'll stick them in place once painted and the building is stuck in place. I need to put in wall to hold back the ground in front, otherwise the woden walls would rot.  I'm not sure about gutters, I haven't yet found some nice scale ones that will stand being this close to the front of the layout - and anyway, they may be too much of a luxury for this building! 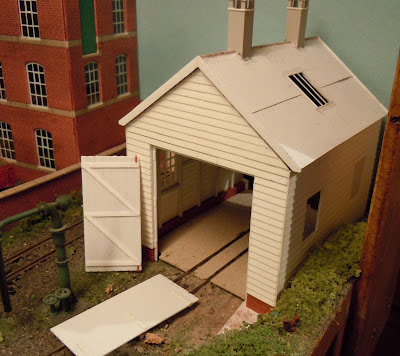 Posted by Michael Campbell at 13:37 No comments:

It may only be a shed roof, but it has proved to be surprisingly fiddly!

The roof itself is 40-thou black plasticard on four triangular profiles, and is removable. The corrugated iron is Slaters, cut into strips and the upper piece has a 5-thou strip under the bottom edge, which provides just enough relief to represent the overlap.

However a comment on the NGRM forum about skylights made me think that it would look more interesting with some, and they would let more light in to show the interior, plus many of the prototypes I had looked at did indeed have skylights. These were made up from various sizes of microstrip, sitting just proud of the roof, and will have clear plastic slotted in from behind. In addition an engine shed needs a means of venting the smoke and steam - either a full-length vented clerestory or chimneys over ducting were the usual methods. I opted for the latter - because they looked simpler to make - using square section plastic. 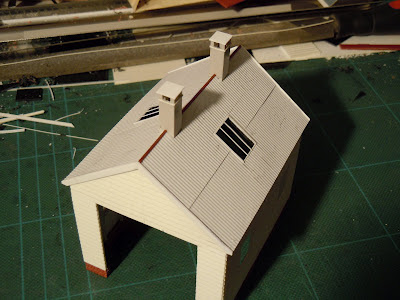 The addition of Plasticard strip barge-boards and a rod along the ridge line tidy up the edges, it just remains to find some tissue paper to make the lead flashing and finish the roof. That still leaves the doors and a floor before painting, I think on this building guttering would have been an option that may have been omitted! 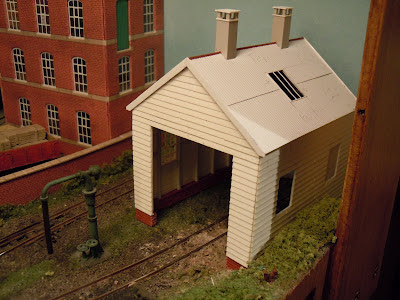 I've been on the lookout for items to detail the interior with, and when passing Gaugemaster recently I picked up this pack. I may not use all the parts in this model for fear of over-equipping a small shed, but it should give me a head start. 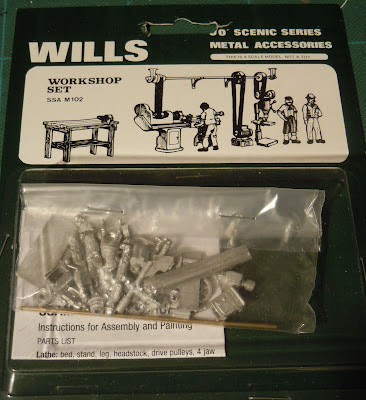