On our third day in Wales, my son was adamant he wanted to go on a steam train again. With the Mrs happy to have a quiet day, and my daughter needing a quiet day (partying until 9pm takes it's toll on a 3-year-old), I was encouraged to take him to the nearest railway.... 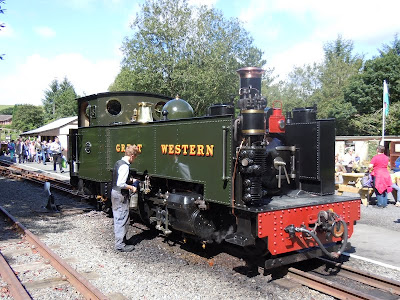 ...which happened to be the Vale of Rheidol. I'd never visited this line from Aberystwyth to Devil's Bridge before so it was nice to get the opportunity, and I think it is a rather under-rated line, eclipsed by the better known railways further North. The powerful GWR-built 2-6-2T locos, based on the Davies & Metcalf locos that went before them, are beautifully turned out and attractive, despite their somewhat brutal appearance.

Interestingly the VoR is not really a preserved line, although it has changed hands several times it has never closed. British Rail continued to operate it until 1989, since when it has been privately owned and commercially operated - there are no volunteers, but it is a very professional tourist attraction. Not just the locos, but the carriages and stations are in excellent condition, and a new engine shed/workshop is under construction. 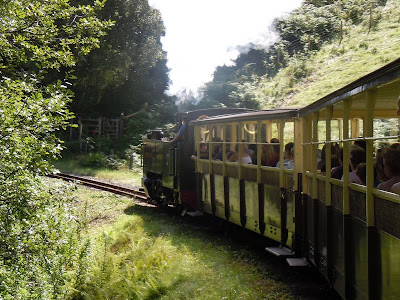 The upper half of the line is mostly on a 1 in 50 grade, which means that with a full train such as this, the loco is really having to work. (Although the VoR is not so famous amongst enthusiasts, the trains were at least as full if not more crowded than any of the lines we visited that week). At the top of the line Devil's Bridge station looks like it was designed to be modelled, an idyllic spot. 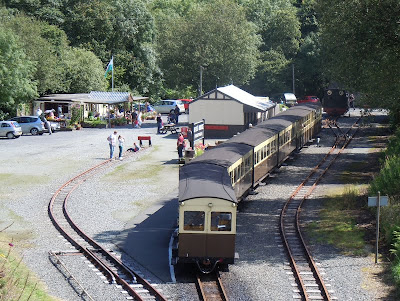 The next day we didn't visit a steam railway. Although we did take the Funicular railway up the cliff, which gave some spectacular views (as you can see by now the weather was unusually summery for this summer!), and some jolly nice ice-creams at the top! 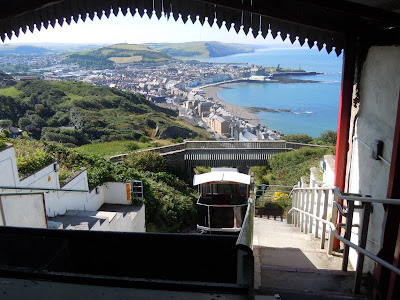 Now as it happens the sat-nav plotted a route home that passed both Welshpool and Llanfair. Of course this was too good an opportunity to miss, so an early start on our last day saw us catching the first train of the day from Llanfair on the W&L. 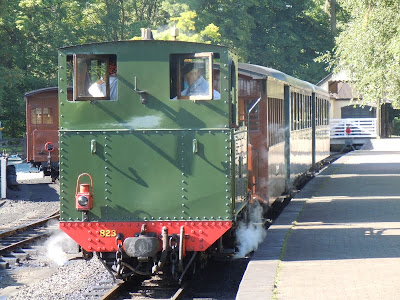 Countess is another GWR engine that is far from typical! Along with "sister" loco The Earl, it was built by Beyer-Peacock, but the GWR couldn't resist adding Swindon-trademark safety valves and chimney. The W&L and VoR were built around the same time and have many similarities, but feel quite different. The modern W&L is very much the product of dedicated volunteers. 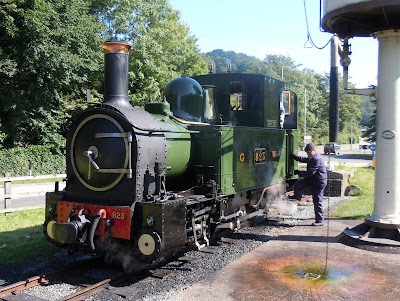 The line has quite sever gradients, including stretches at 1 in 30. The Hungarian coach we were travelling in had a rather useful balcony - a great place to watch the loco (and crew) working hard! 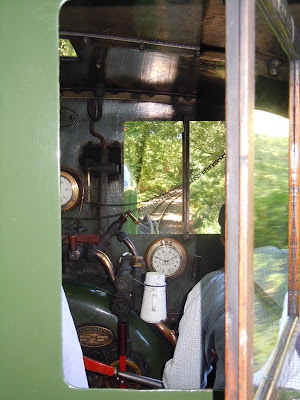 It wasn't planned that way, but visiting 4 narrow-gauge steam railways (and a funicular) in the space of 5 days made me a very happy man!

Just in case you want to see more pictures, click the picture below...

A Holiday in Wales: Festiniog and Talyllyn

After visiting my family in Cheshire last weekend we headed over to Wales for a few days. By remarkable coincidence the route to our caravan park passed through Blaenau Ffestiniog! OK, I'll admit this was planned - I'm a member of the Festiniog Railway Society although it must be 15 years since I actually did any volunteering, and only manage to visit the line about every three years these days. 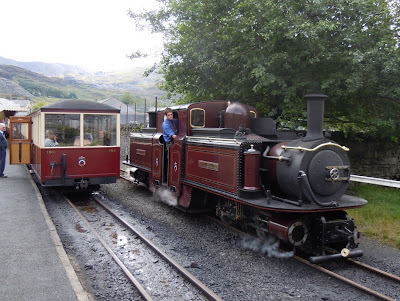 We started from Blaenau, as it suited our route best and parking is easier (particularly with a roof-box exceeding the height limits at Porthmadog). Our train was hauled by double-Fairlie Merddyn Emrys, but at Tan-Y-Grisiau we passed Lyd on an up train, making for a rather nice photo. 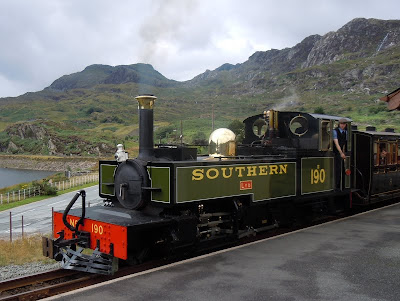 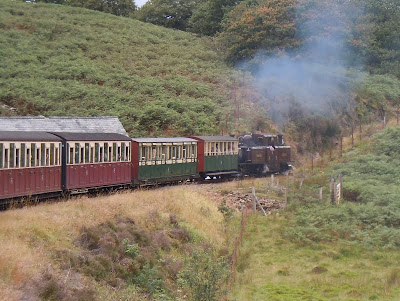 I've not visited the Talyllyn Railway for many years, but I've always had a soft spot for it since reading Boyd's book on the pre-preservation days of the line - indeed this was one of my inspirations for Narrow Gauge.  Here's Talyllyn running around our train at Nant Gwernol. The cheesy grins in the Corris coach are my family, having enjoyed a ride up the line right behind the loco. 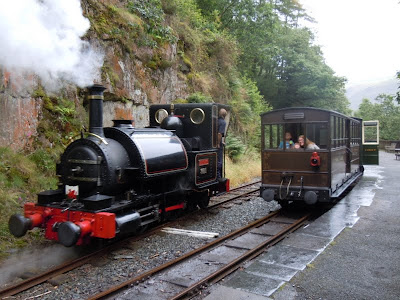 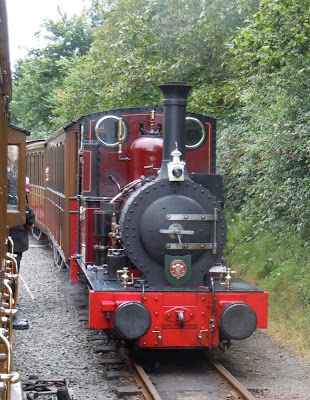 On the way back to the holiday park we passed through Corris (we'd travelled from Abergynolwyn), sadly there was no time to visit the museum and short line but I spied a wisp of  smoke over a hedge. So I pulled over and took a snap of TR No3 Sir Haydn, and the Corris Kerr-Stuart replica. 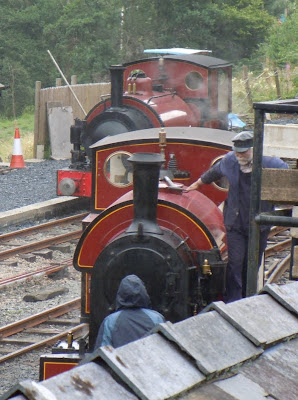 A nice couple of days on the narrow gauge, and fortunately it seems the kids like steam trains. In fact at Towyn my 5-year old son ran off up the platform with his Fisher-Price camera. My wife shouted after him to ask where he was going, "I'm going to take a picture of the engine" he shouted back...

Good lad.
Posted by Michael Campbell at 23:38 No comments:

About four years ago I posted about a visit to Tatton Park Farm, and the narrow gauge tracks around the farmyard. Having commented about it being an interesting subject for a layout, last year I built that layout - Landswood Park Farm - in a boxfile for the EXPO-NG challenge. While building the layout (and even though I picked a freelance setting and name) I could have used a few more photos to help me out, but living 250 miles away it wasn't practical! Today while visiting family we decided once again it would be a nice afternoon out with the kids, so I took the opportunity of getting some more pics and research. It is of course a bit late for my model, but in case you are interested... 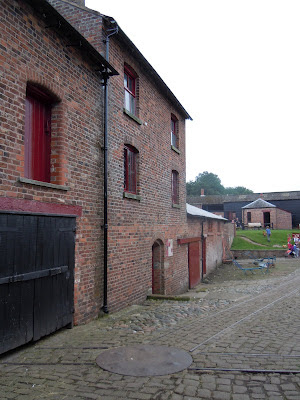 This 3-storey building I now know was the mill, and beyond it the boiler-house and engine. The siding running in would presumably been to take grain in and/or flour out, not a traffic I had factored in to my model even though it may well have been the main reason for this short line. 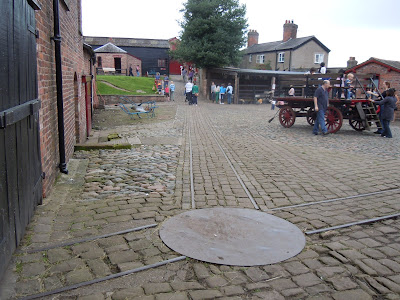 A close-up of the track, setts and cobbles, and the simple wagon-turntable. The red door on the building at the top of the hill is some kind of store I think, perhaps that is where the grain was stored, and wagons used to move it down the hill and into the mill?

A check with my size 11's suggests the track gauge to be approximately 2ft. I'm very pleased to say I think I got the size, arrangement, and colouring of my setts and cobbles spot-on on my model. 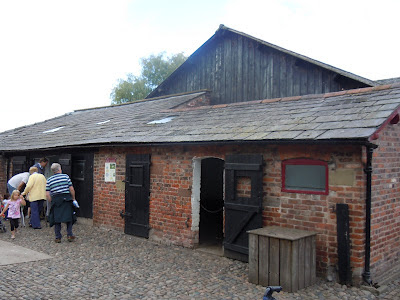 I think I got the building styles captured too. 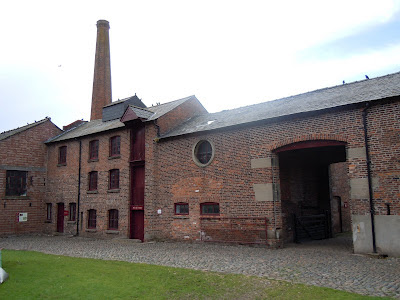 The rear of the mill building, with the chimney marking the position of the engine-house beyond. The track in the first picture seems to run inside the building to the centre/right, probably ending behind the bricked-up archway, although there is no sign of any rails in this courtyard. 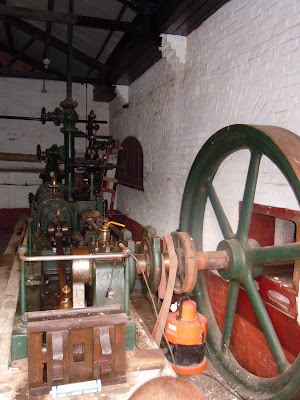 Finally the steam interest - the engine, although I suspect the Vax is not original. The Lancashire boiler was in a separate building immediately to the left of this picture, but I couldn't see if it was still in there.

Plenty more inspiration there, and who knows, perhaps another layout based on this farm may one day get built! I'd also say that Tatton Park Farm is well worth a visit if you are in the area, especially with kids.