This afternoon I visited a gathering of layouts and like-minded railway modellers. All the layouts (mostly Narrow Gauge) were superb, and the informal atmostphere was nice. There was a sizeable contingent of minimum-gauge models, Gn15 being particularly popular. That scale packs a lot of detail! 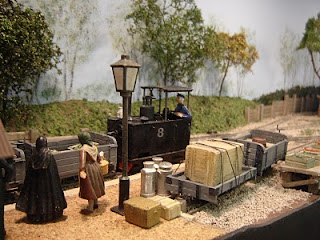 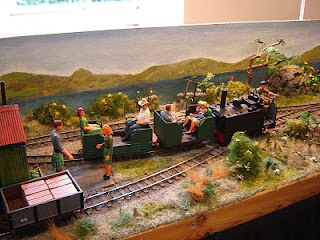 Some of the layouts were shown in an under-construction state, including that of fellow Sussex Downs 009 group member Phil Savage, based on the Darjeeling Himalayan railway. Even at this stage of construction, it couldn't be anywhere else could it? 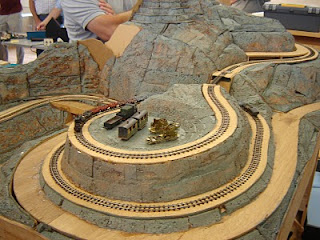 Another one in the early stages of construction was the Harrogate Gas Works by another friend Steve Fulljames. I'm watching this one develop with interest. 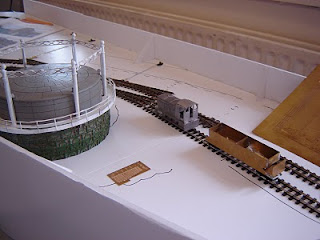 Posted by Michael Campbell at 23:08 3 comments:

While I haven't managed a lot of modelling time recently I have made up a number of couplings. I use Microtrains (ex-Kadee) couplings, and they generally come in packs of 10 pairs to be made up. Assembly is simple enough, although it does involve some very small and easily excitable springs ... I tend to make them up a pair at a time and work through a batch to make up several pairs. When in the rhythm a pair only takes about 10 minutes.

It can take a little longer to fit them to rolling stock though. It is not too hard with larger stock, and especially when building them. The three "Welshpool" wagons I built recently were on the workbench, when building them I had added plasticard behind the buffer-beams to give a flat surface around 5mm square, at the right height to fix the coupling to (I have a height gauge made from plasticard which sits on the track, when the stock is rolled up to it the coupling mounting should just pass over a tongue on the gauge). So all that was needed was a small hole for the fixing screw. With hindsight I should have mounted them slightly further out, as they are rather too close-coupled, but they don't foul on bends so they'll do! 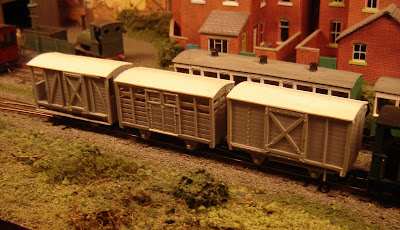 These coaches have been in my stock boxes for years and needed conversion from the "DG" couplings I used to use. They are Parkside Dundas Vale of Rheidol coach kits, although to make them more suited to the curves and train lengths of my layout at the time (Pen-Y-Bryn) I shortened them by a door and a window at each end. They do look a touch "mainline" for Awngate, although even with the VoR brake van they do (just) fit the loop. Anyway, the DG's had been mounted on the bogies, but the Microtrains are rather tricky to mount that way. Being sprung though they work well attached to the body, so the bogies were reversed (I could have cut the coupling mount off instead!), and a plasticard mount built up behind the buffer beam. This time I got the spacing a bit better, though I have noticed there is a vacuum pipe missing from one coach. Not a big deal as come to think of it, they are missing from all my locos! 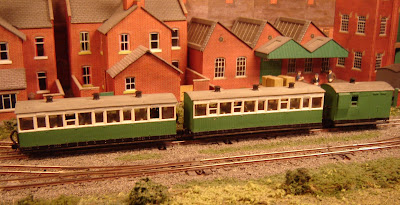 Posted by Michael Campbell at 23:06 No comments: