I am very considerate of my 1:76 scale railway employee's safety, and so I have added safety railings to the ground frames. Well, actually I thought it would add a subtle modern twist to the traditional looking station, reflecting the preservation era it is set in. 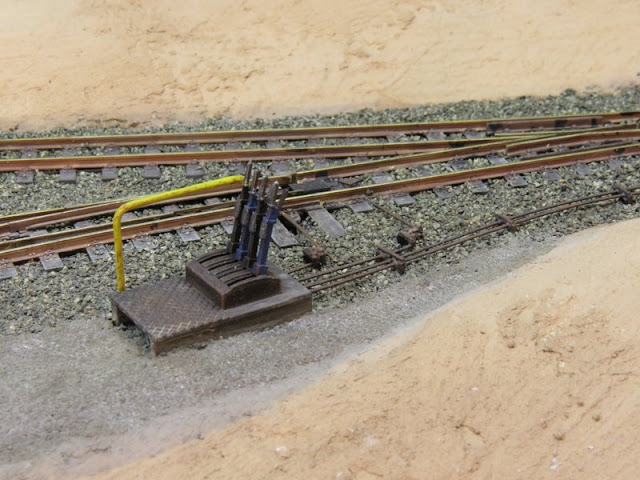 At the station throat the 4-lever ground frame has a railing to protect the operator from passing railway vehicles. The railing is 1mm brass rod bent using round-nose pliers and given a waft of primer before being painted health-and-safety yellow, with a little dry-brushed rust and dirt. This was then glued into a couple of holes in the baseboard. 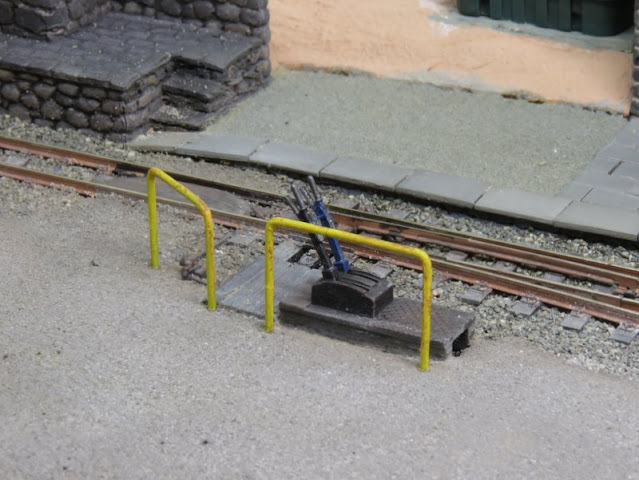 At the loco release point by the yard the railings are on the yard side to protect them and the rodding from road vehicles. I'm hoping they offer some real-life protection too, the plastic levers are vulnerable to knocks. With hindsight I should have fitted the levers after completing the scenery...
Posted by Michael Campbell at 23:48 1 comment:

This book, Britain's Railway Disasters by Michael Foley, is a bit different to others I'd read recently, and not just because I got this one in e-book format for a change. As the title says, it recounts fatal railway accidents from the dawn of public railways to modern times - ending with the Potters Bar accident of 2002. I've no idea if it is comprehensive, but it certainly lists an awful lot, and gives a picture of how rail safety has improved over the years. In the early years there were many incidents of trains running into each other or meeting on the same tracks, as well as mechanical failures, although the numbers of fatalities were often surprisingly low. As trains got faster the accidents were more severe, with wooden coaches telescoping into each other and gas lighting causing fires, so while signalling improvements reduced their frequency the death toll could be far higher. In more modern times safety procedures are much improved and trains are stronger so fatalities are rare, though serious accidents have occurred. 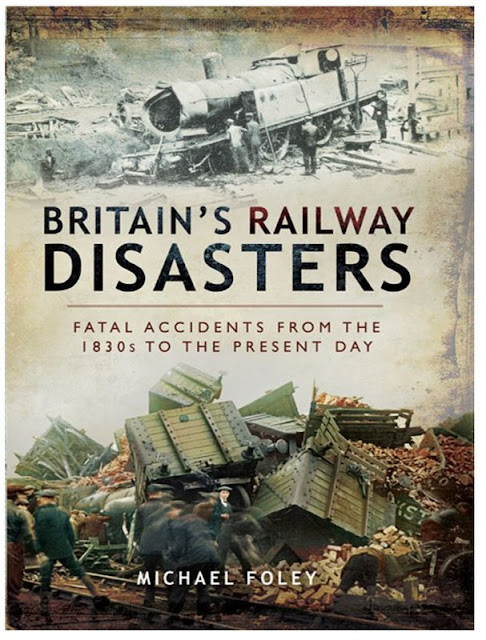 The book starts with a brief history of the railways in Britain, and an interesting observation on "the effects of rail travel on the person", a controversial topic in the early years of rail travel and shows that medical lawyers are not new. The accidents are then described chronologically. The main source seems to be newspaper reports and so the accounts have the contemporary perspective, and observations on the aspects that newspaper reports sometimes focus on. Reports by the Board of Trade or coroners are also used, but the text often doesn't detail the root causes of accidents or report findings. I guess this depends on what information is available, and avoids repeating the same causes, but there is some commentary on the general trends.
Personally, I would have appreciated a little more background to the safety systems of the day and how they were failing - a basic description of signalling systems, how they developed, the introduction of braking systems, and other significant legislation could have been covered within the history chapter without being too technical. I think that would have highlighted this narrative to support the fragmented and incomplete story of safety improvement that comes from the descriptions. However, this isn't meant to be a technical book, and there are many other books that look at those aspects of railway safety in detail.
There are a good number of illustrations, mainly contemporary photographs, although many don't link to the accidents detailed in the text and the reproduction quality wasn't high in my digital edition at least. However, they do show the aftermath of accidents, the destruction of wooden carriages and chaos of derailments, and adds feeling and context to the stories of the accidents.
This could have been a difficult book to read, but it isn't. The text flows well and the human perspective provided by the contemporary newspaper reports prevents it becoming dry and repetitive. Of course there are some sad stories, but also some miraculous escapes, and the overall theme is improving safety and responsibility from the railways. This is a social history as much as it is a railway history, and tells an important story.
Posted by Michael Campbell at 00:13 No comments: