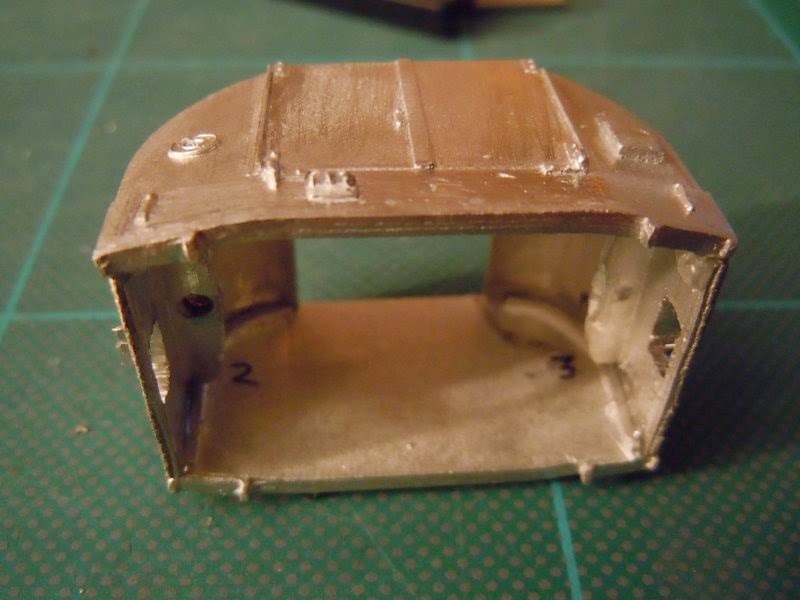 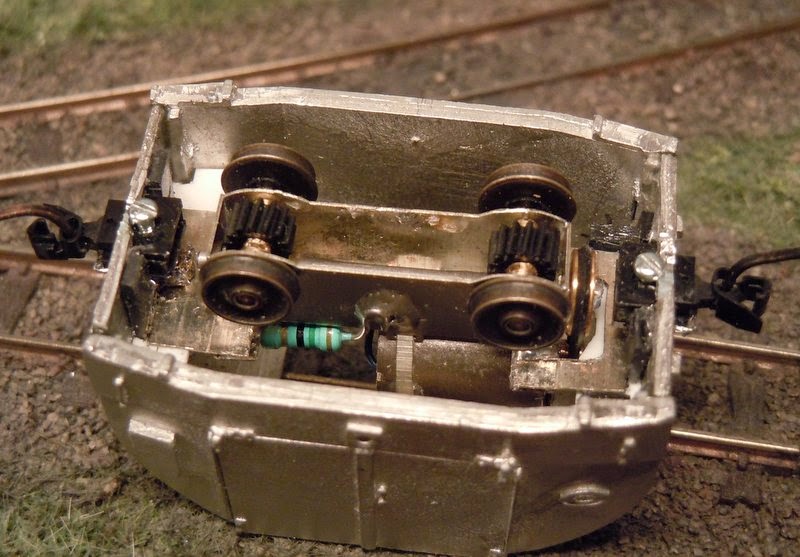 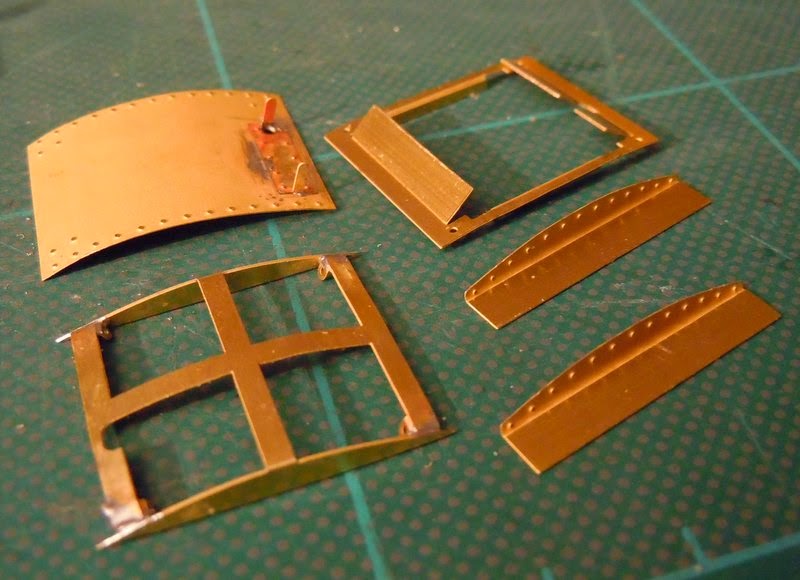 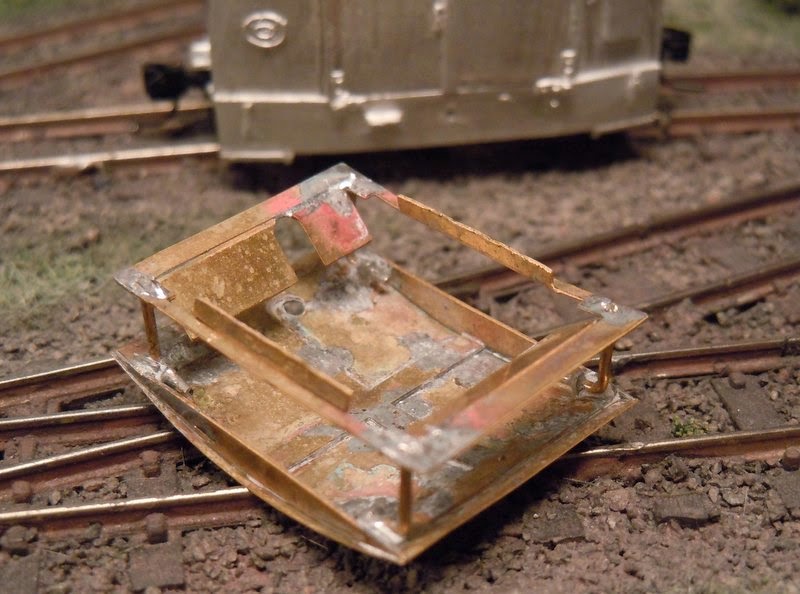 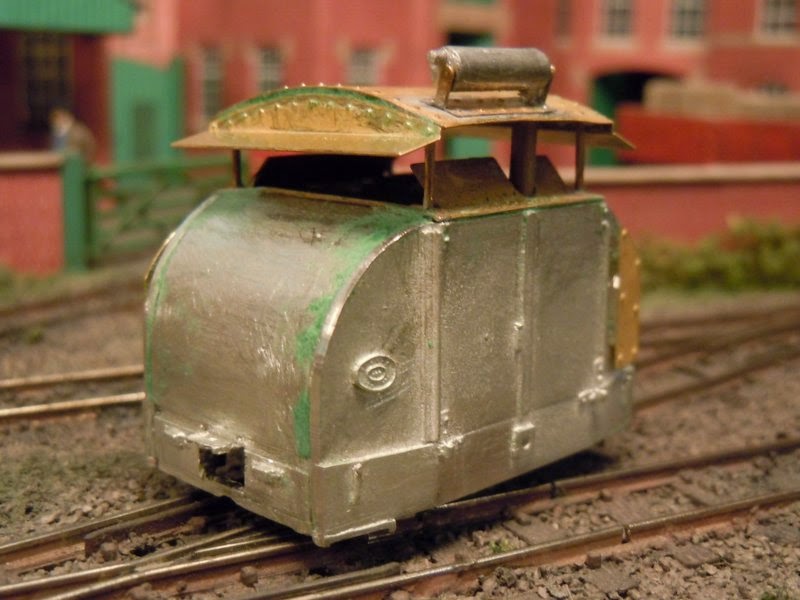 As you can see from this photo I've got it sat nice and low to the rails. The green patches are filler, though I'll have to get a coat of primer onto it to see if there are any other gaps.
Posted by Michael Campbell at 22:28 No comments: 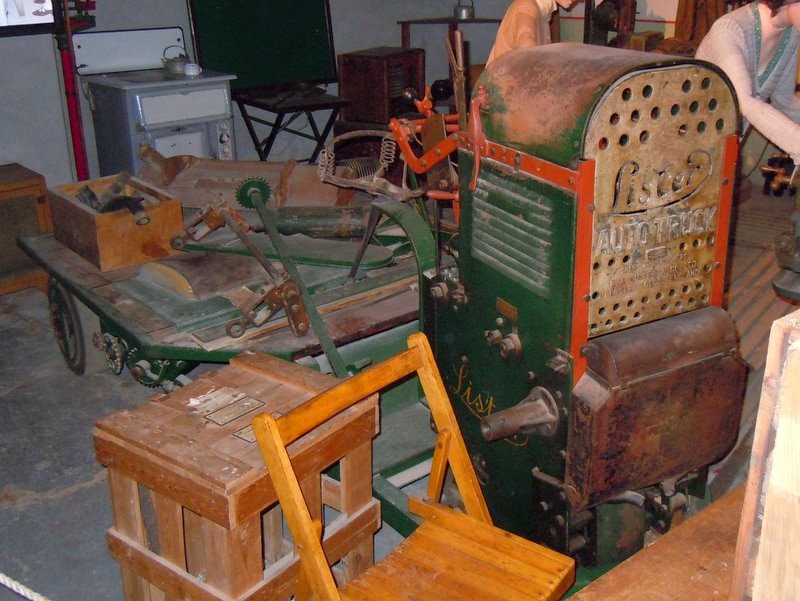 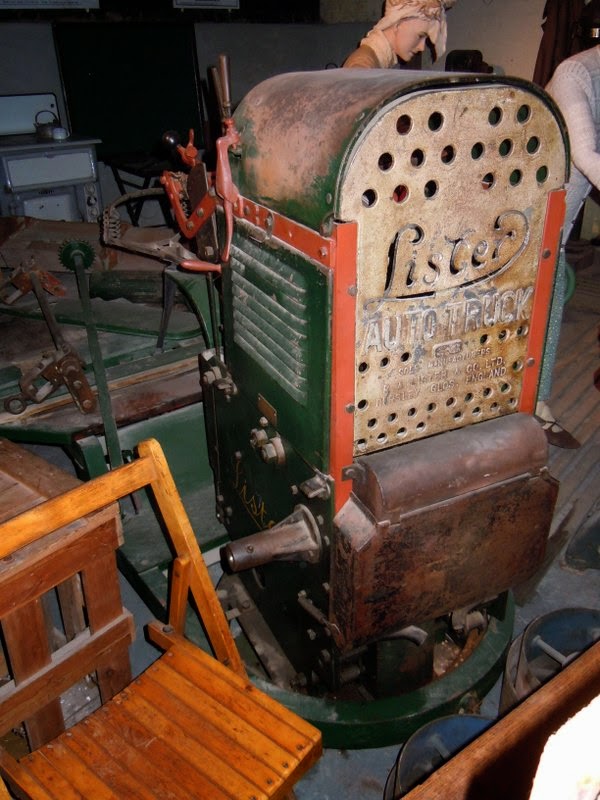 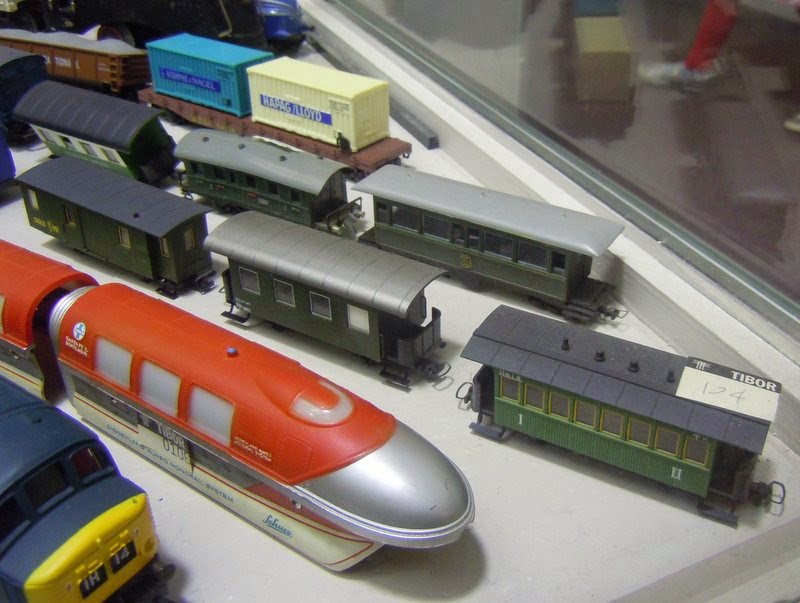 An Outside Framed Chassis

At Narrow Gauge South I headed straight for the 009 Society second-hand sales stand. The society had acquired a batch of chassis from the Minitrains Fiddletown & Copperopolis Locomotive, these are 0-4-0 steam loco chassis with outside frames. Of course to narrow-gauge modellers outside frames chassis are very useful, but almost unknown as a ready-to-run chassis. I'd also heard they are excellent runners so I had to have one! 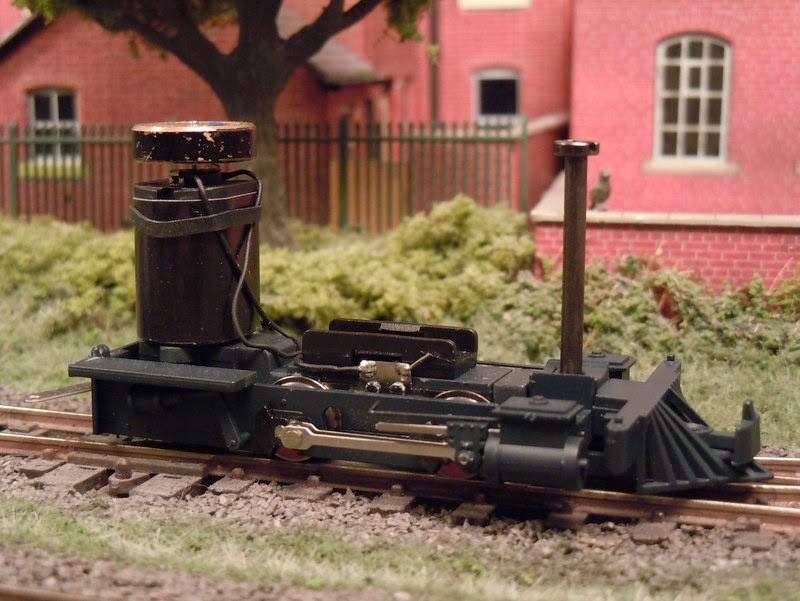 The outside frames, with flycranks, are obvious and nicely made. The cylinders are rather American in style, easily changed no doubt, but the frames are of the plate-type so ideal for a UK outline loco. The cow-catcher will have to go but the long screw (that would go down the chimney) holds the front of the chassis, so might need some thought!

With the rear-hung motor and flywheel you's guess it is a very rear-heavy chassis, and indeed it pulls wheelies well! However with just a lump of blu-tak on the cow-catcher to counterbalance it, the flywheel and low gearing ensure the chassis purrs along beautifully; smooth, slow, and quiet. This will be a useful loco - but what loco should I build on it? 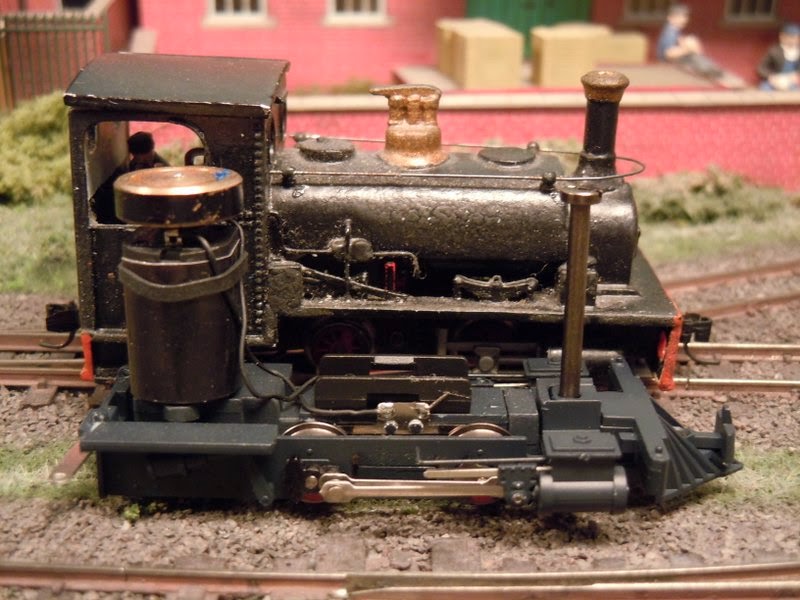 My first thought was the large Hunslet I have - this was one of the locos built in my teenage years on an Ibertren chassis. It could do with being tidied up but the chassis isn't a great runner, and with inside frames and small wheels I've never been happy with it - it needs outside frames! However as you can see, with the Minitrains chassis positioned so the motor is in the cab, the wheels and particularly the cylinders are too far back, and will look wrong in relation to the smoke-box and chimney. Shame...

I've also tried a Hampton Water Works Kerr-Stuart body kit (I've got a partially complete one in my bits box), but that wasn't a good fit either - it might be possible but very tight. I've already seen Kerr Stuart Skylark kits built onto this chassis (by James Couling and Charlie Insley), but I've already got one of them as a tram loco. Steve at Narrow Planet had a test 3D print of another Hunslet to fit this chassis, so there's another possible option. Decisions...
Posted by Michael Campbell at 22:40 3 comments:

The biennial Narrow Gauge South exhibition is always a good show, with a large number of layouts, traders, and a good atmosphere. This year it was the host of the 009 society AGM once again, and the show does have a definite bias to 009, although 7mm NG and other scales are represented too. This year I visited as a paying punter, which meant I had plenty of time to look around, take in the layouts, and chat to folks. Having been either exhibiting or with small child in tow at many exhibitions recently, that was a nice change! 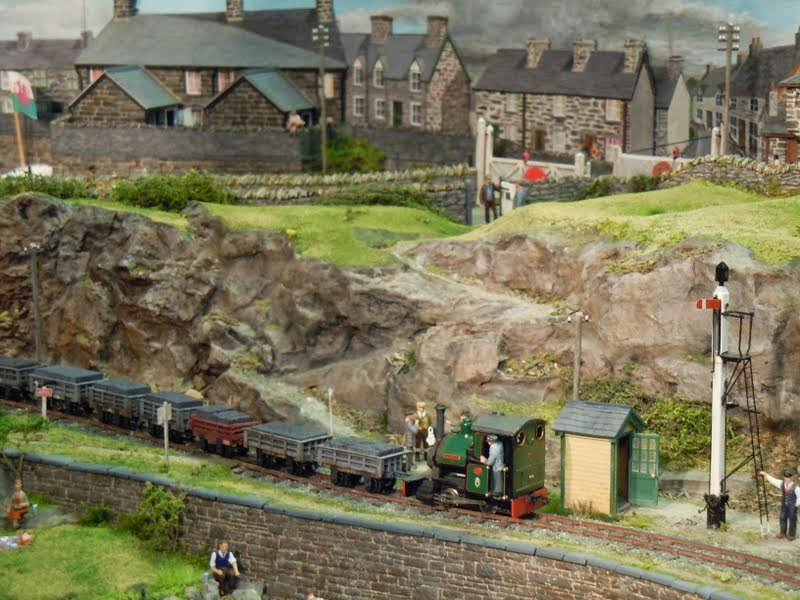 Friend and Sussex Downs group member Martin Collins had taken his partially complete Ffestiniog Railway inspired "Llandercwyn Railway" to it's first proper show. With about half the layout largely complete it is clear that this will be a superb scenic delight, and Martin's locos and stock are to an equally high standard. Unsurprisingly with so little running in advance, there were some operational gremlins - mostly operator confusion I think! 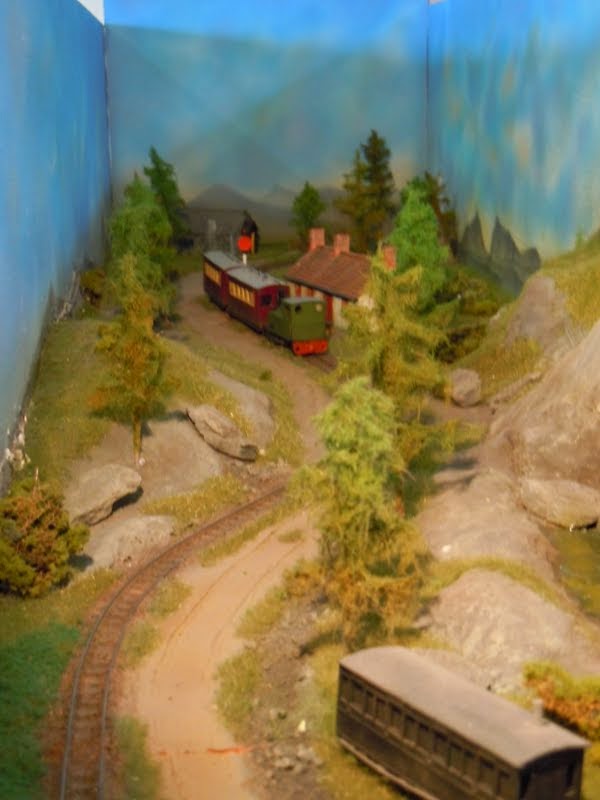 Nic Arthur's "Torrisdale Railway" was also at it's first show, the layout is interesting in design. Out of the small terminus station the line turns away from the viewer and heads up a valley which can only be seen from the end. Watching the train weave through the trees towards you is rather novel. 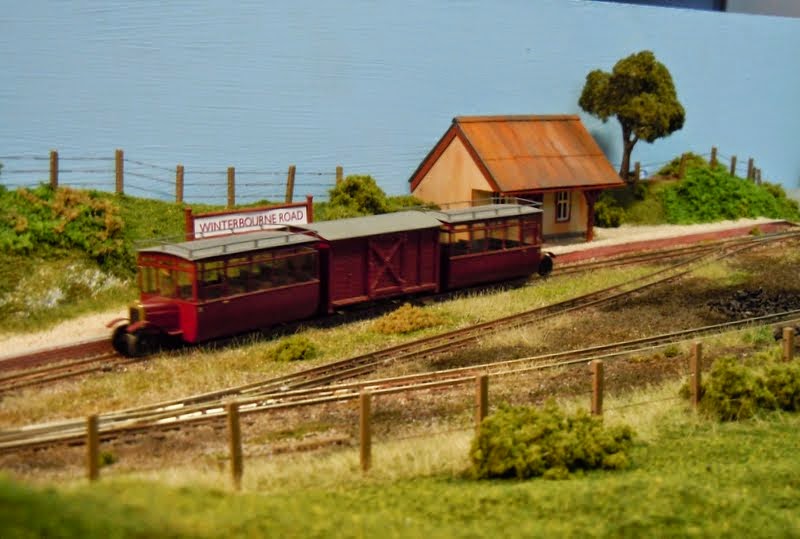 "Ryedown Lane" by Pat Collins is a lovely Colonel-Stevens style terminus that has proved a popular layout at exhibitions, but as well as adding a sky backscene in place of the operator's shirts, Pat has added an extension with a through station; "Winterbourne Road". As you can see it has just the right atmosphere. 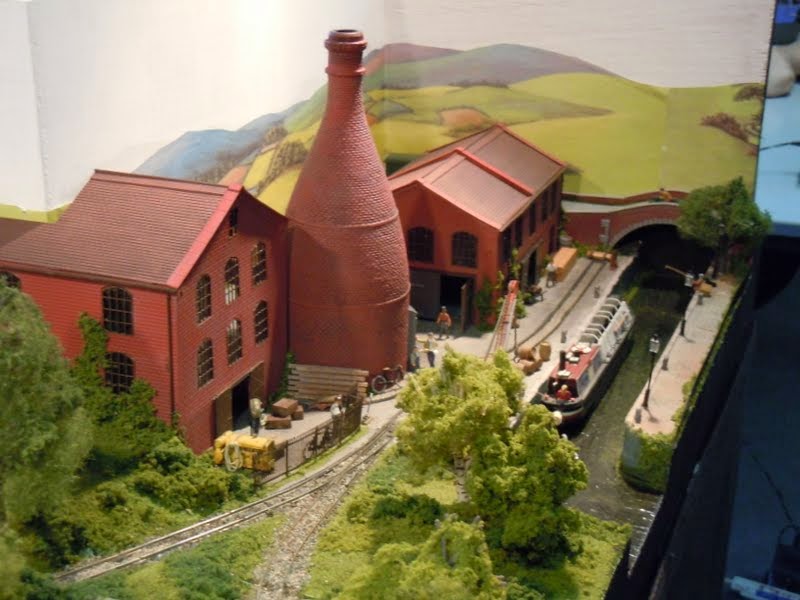 Prolific layout builder John Thorne premièred his "Bottle Kiln Wharf" layout, built to his usual style and high standard, with lots of details and glimpses through the trees. It's clear from this shot where the layout gets it's name. The kiln is from Skytrex by the way. 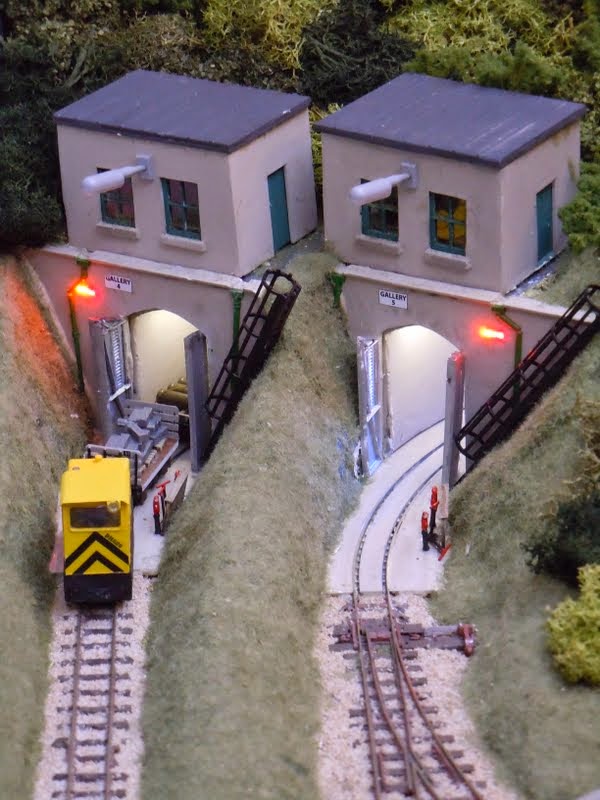 Another novel layout was "Dean Hill" by Jim and Lyn Owers, a montage of scenes from the Royal Naval Armaments Depot of that name. It's different to see a "modern image" NG freight line modelled (well, they've closed now, so I use the term modern in a relative sense!). The prototype has been well observed and the model is well detailed and executed. It also provides an "original" habitat for the Narrow Planet Baguley Drewry kit!

So there's a few highlights of some new layouts, but with (I made it) 26 layouts in total, it's just a brief glimpse. If you'd like to browse more photos click here.
Posted by Michael Campbell at 23:25 5 comments: