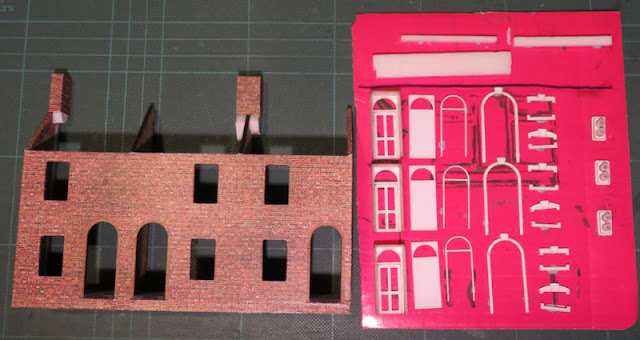 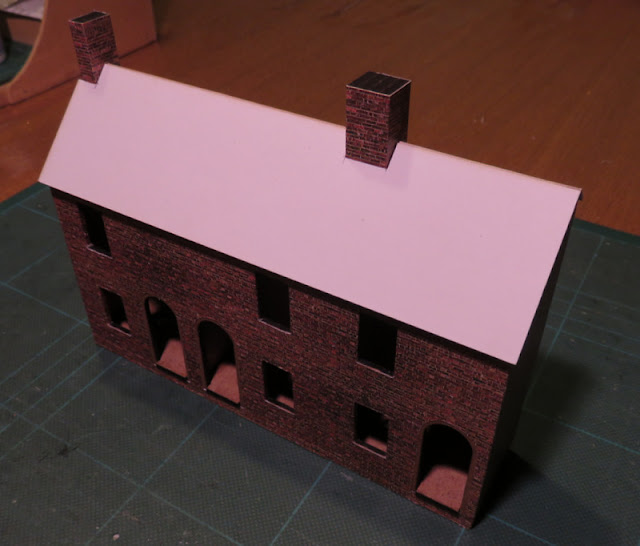 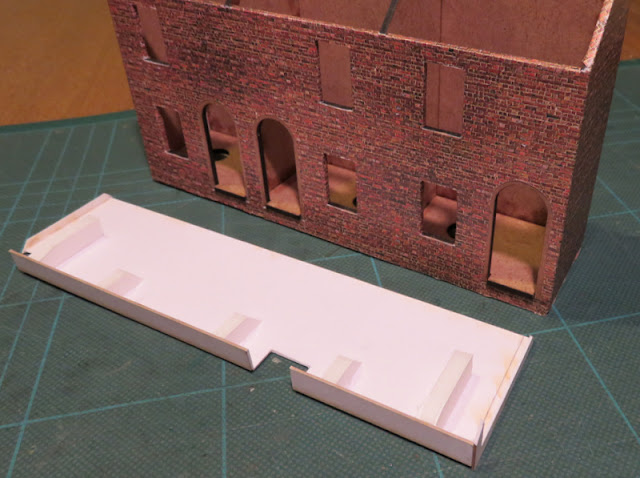 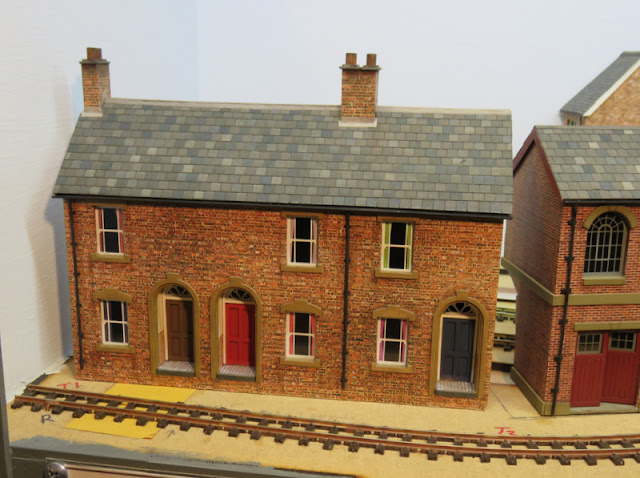 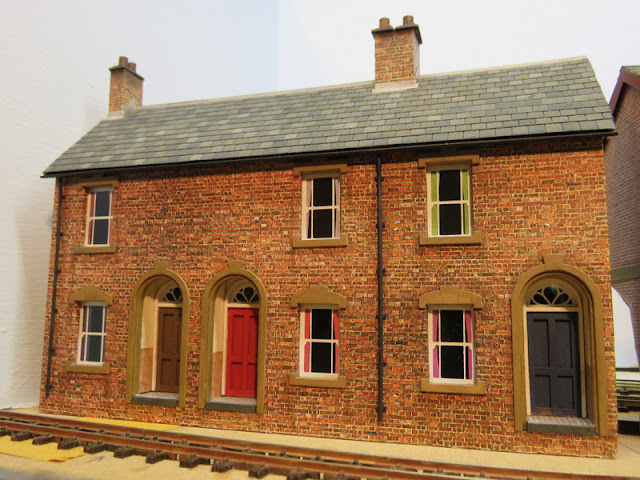 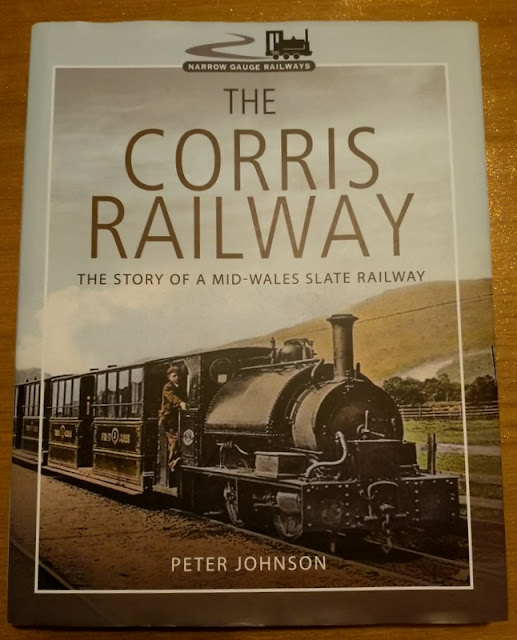 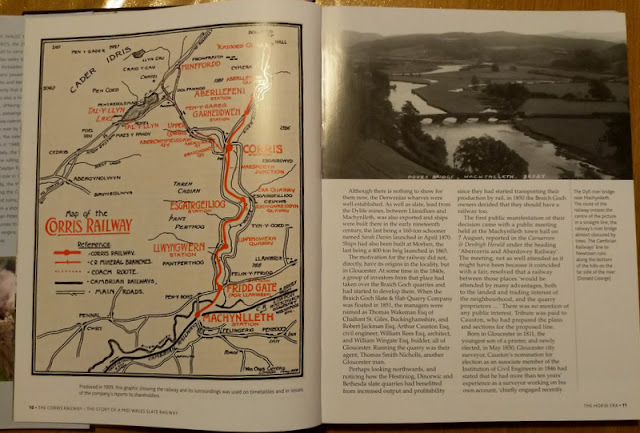 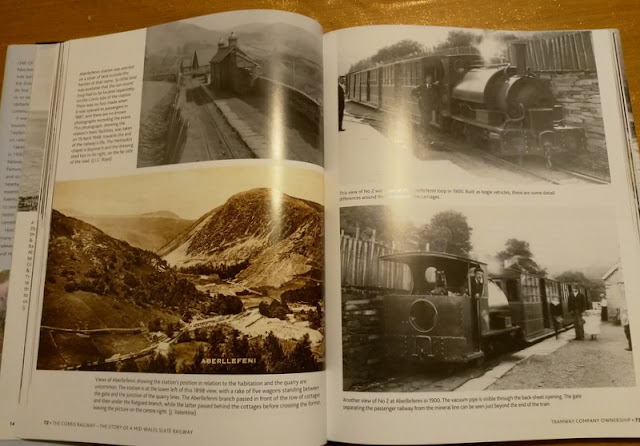 So perhaps it isn't a definitive volume about the railway, but it is nonetheless worth of a place on the bookshelves of enthusiasts of narrow gauge and other quirky independent railways, and is a valuable record of the history of this little railway and it's place in the Dulas valley. I found it an enjoyable and informative read, and as a modeller, a good source of inspiration.
Posted by Michael Campbell at 23:21 No comments:

The end of the road

Faced with an exhibition form to fill in I was forced to come up with a name for the 009 society challenge layout, so I chose "Locktern Quay".

Meanwhile, work is progressing on the street at the back of the layout, particularly the left hand end of the road, where buildings were needed to disguise the sector plate and the fact the road goes nowhere. As these buildings have to fit some very specific sites and are odd shapes they had to be scratch-built to fit. Hopefully they will give the impression that the road continues around a corner, and there is more to the town/village than the buildings seen. 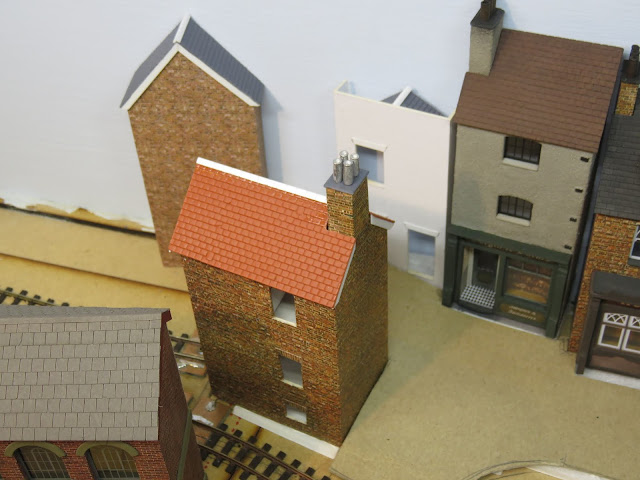 The central building here had a mock up you may have seen in earlier photos to confirm the size, actual construction used foam-core board for the ends (double thickness for the chimney) and mount-board card for the side walls, the foam-core trimmed to recess the card behind the outer layer of card at the corners. This makes a sturdy yet relatively simple core to which brick-paper is added. Chimney pots are Dart Castings set into an off-cut of Wills roofing plastic, with the detail sanded off and turned face down. 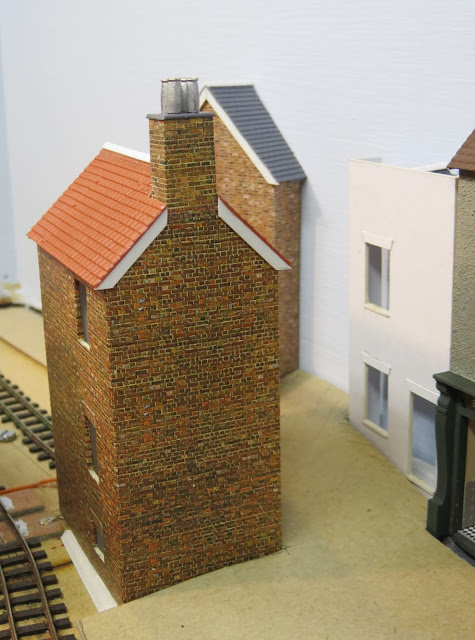 The white building is simply card, which has a texture I hope will look like plaster once painted, the edges are not normally visible. The lintel details are cut from thinner card. I thought the "London" style hidden roof would be different, and avoids an obviously odd-shaped roof given the narrow tapered shape of the building. 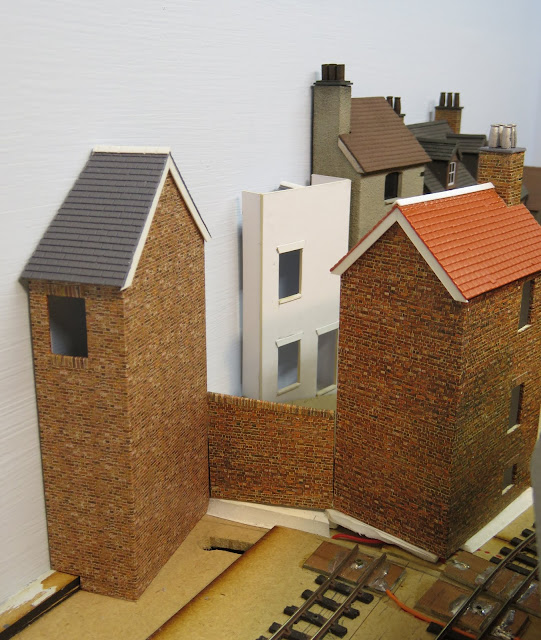 The final building is simply a gable and short side walls (foam-core and card again) with a single window, and a different brick-paper finish. All three buildings will use laser-cut windows, but from two different sources. 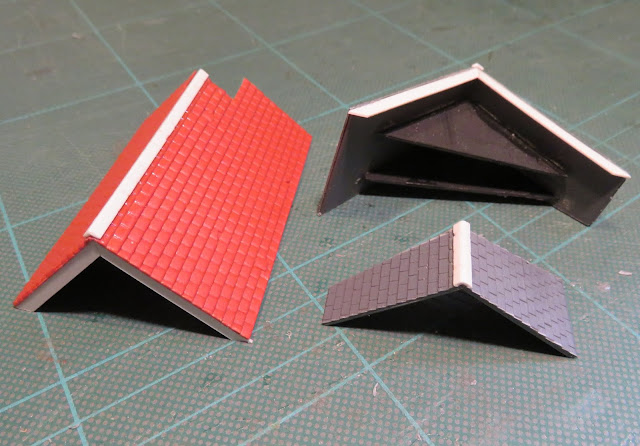 The roofs are made from Wills plastic slate or tile sheets, with triangles of 40-thou plasticard used to support them, and L-section plastruct for the ridge scored to look like individual tiles. The ends of each roof piece are rebated to thin the end of the tiles/slates, and barge-boards cut from 20-thou plastic glued into them. 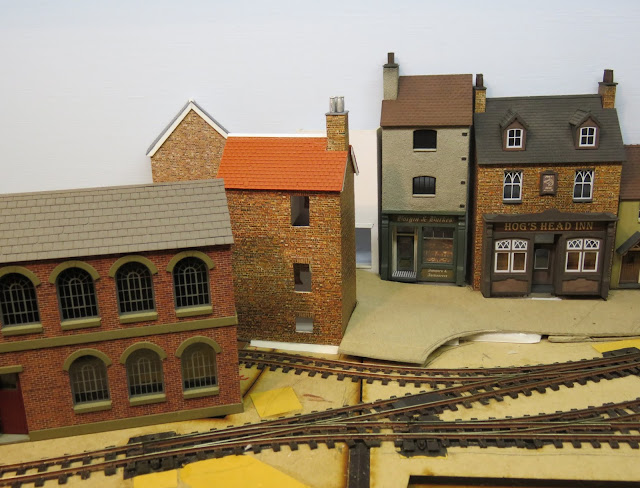 Here's the view from the front of the layout showing how the exit to the fiddle yard and the road exit are disguised, and I think the arrangement of buildings looks natural. You can see I've started making the roadway from card, with packing underneath to give height variation. I've also packed under each building to get the heights about right relative to the road. 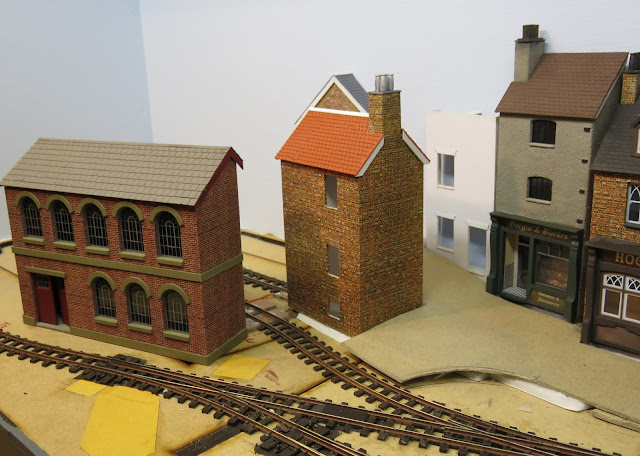 From the right hand end of the layout the sector plate is just about visible but not obvious, but the road exit remains discrete. The upward gradient of the road works well.

Now I just need to paint the details and complete this trio of buildings.
Posted by Michael Campbell at 13:30 No comments: 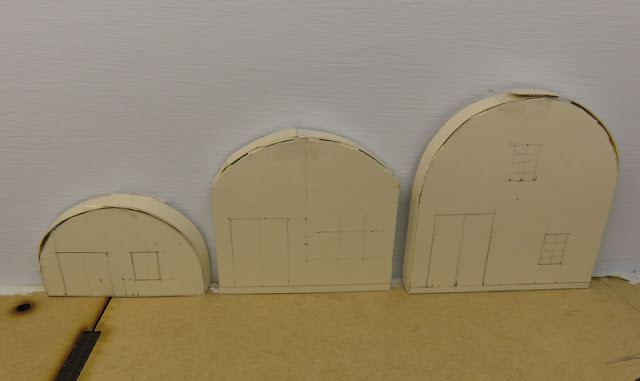 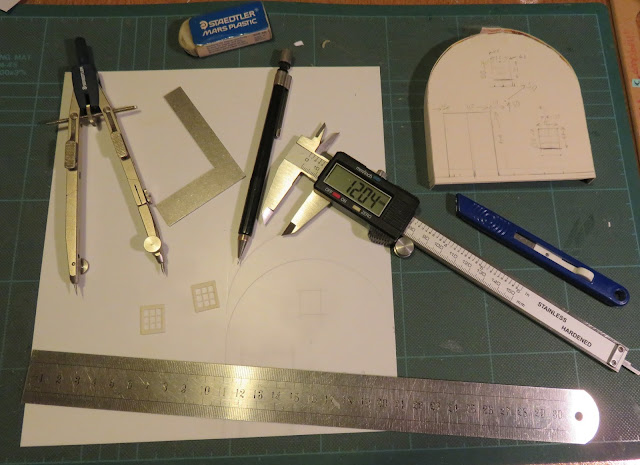 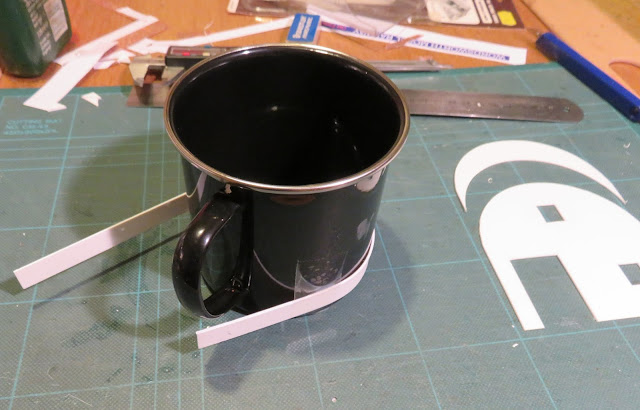 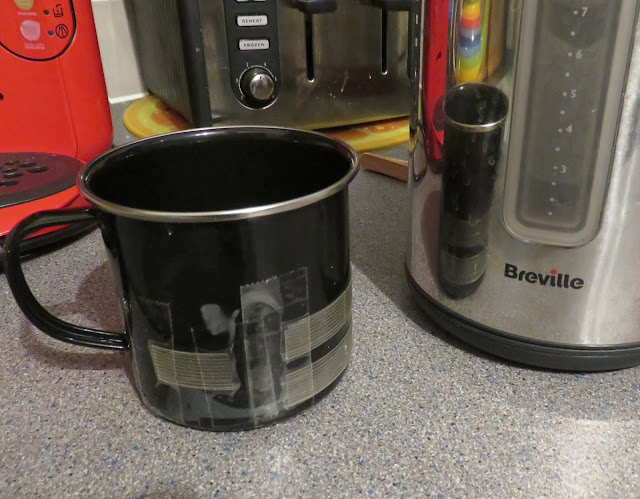 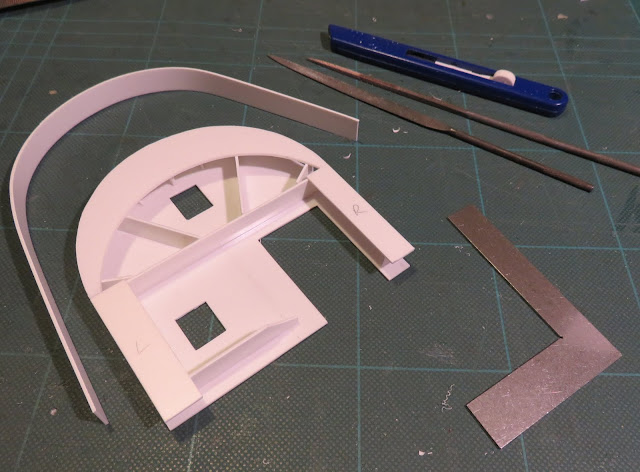 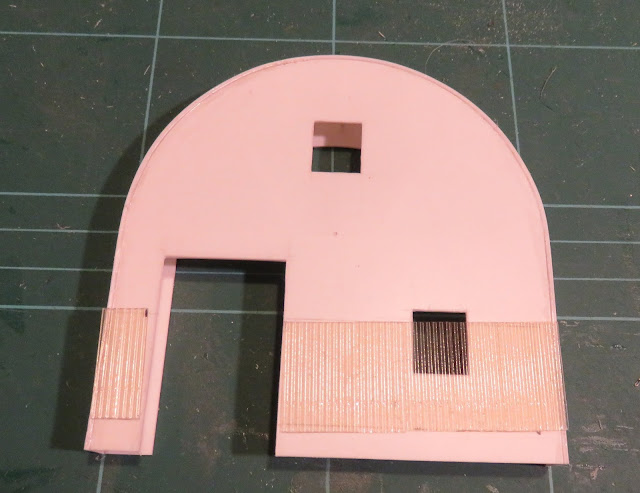 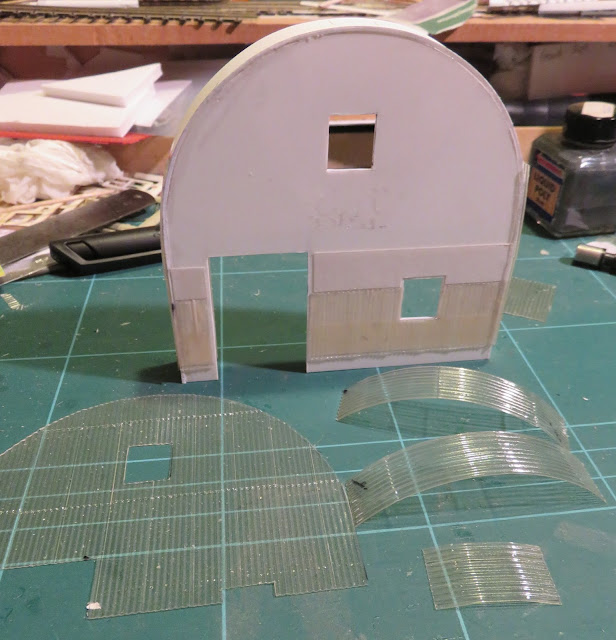 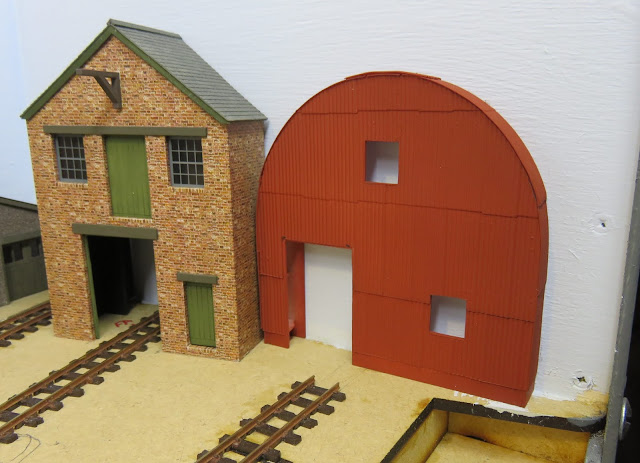 I've also been working on the rest of the street along the back of the layout, so more soon!
Posted by Michael Campbell at 23:24 No comments: