Since my last post I have revisited the stonework of the bridge and walls, touching in some stones with lighter shades of brown to lighten and increase the variation in tone. I think I overdid the washes to unify the colours which were too dark. The effect is subtle, probably the tone could be a little lighter still, but I am much happier. 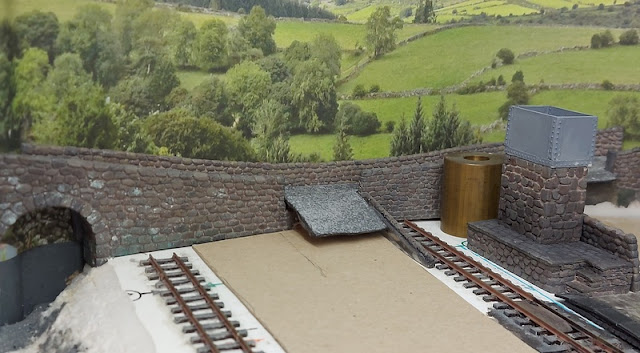 Looking at photos of the real bridge I decided to add some lichen using dry-brushing of mint green paint, yes that really is the colour seen on the real thing (see the last post), and a hint of darker moss green at the base. 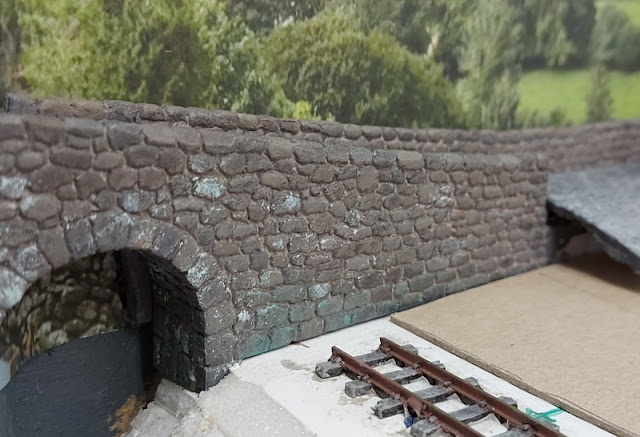 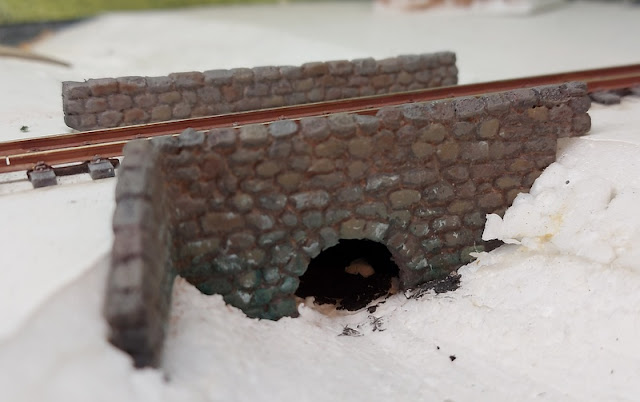 The station stonework looked a little "fresh" by comparison, so I went over the mortar with more weathering powder/talc mixture but this time slightly more brown in colour. It is surprising the effect this has had in changing the tone of the building. I also painted the roof 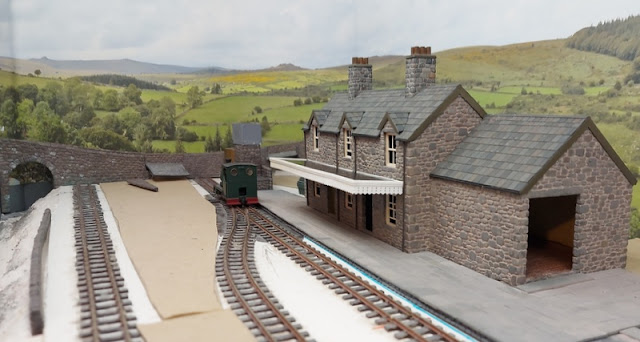 You may notice a few other changes to the station.
I painted the roof - after finding building Loctern Quay that the York Modelmaking slates although grey paper, benefited from painting, I used the same approach here. Individual tiles were picked out in a few shades of grey-blue, then the whole roof given a wash of mid grey - this colours any remaining tiles and tones it all together. Perhaps the variation is too much here, but to me it looks much better than the plain uniform grey before, and hand cut slates can vary in colour much more than modern manufactured slates. 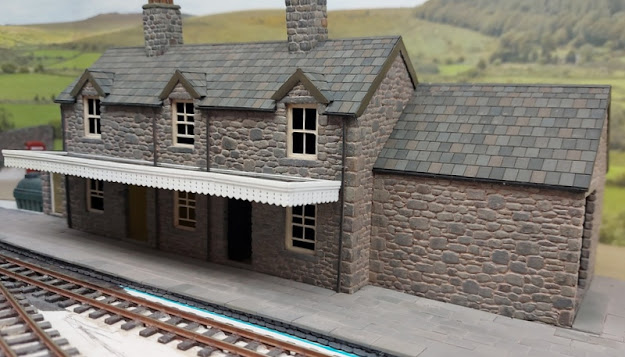 The platforms last seen being laid from individually cut slabs has been painted. I started with a waft of Halfords grey primer, painted a similar grey with a slight hint of beige, then picked out a few slabs in slightly different shades - much less variation here though. A wash of thin beige and more weathering powders to fill any gaps finished the job.
The other change is the addition of the canopy, made from some valance I had in stock (possibly Slaters) and plasticard, it has wire (paperclip) rods set into it that poke into holes in the foam building walls through into the foam-core of the intermediate floor. Although just a push-fit for now as it needs painting 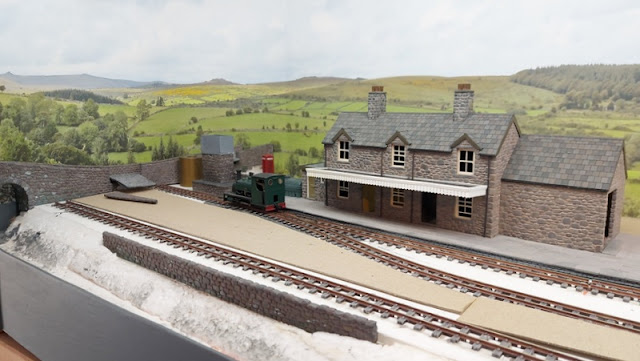 A little way to go with the ground coverings but the station area is starting to take shape.
Posted by Michael Campbell at 23:19 No comments:

Unlike many I have been fully occupied of late - I'm not complaining, but modelling time has been more limited than expected. Slow progress has been made though with the stonework around Hexworthy - scribing and painting. The wall and bridge had been cut from foam (polystyrene pizza bases) for some time, finally I have scribed the stonework into it.


The small space behind it looked empty, there's supposed to be a road and another wall, so I added a second wall behind it. As you can see from the close-up this wall is far too close, the road is only about a scale 3' to 4' wide, but from normal angles this isn't obvious so I hope the subterfuge works. With a gate, and a few trees and bushes hanging over the wall the transition to flat back-scene should look more natural. I've also added a water tower, actually a resin casting from Anyscale Models; a nice size tank and the stonework matches well but it was rather low, so I made a coaling platform for it to stand on. (Ignore the brass weight holding the wall upright in place for now). 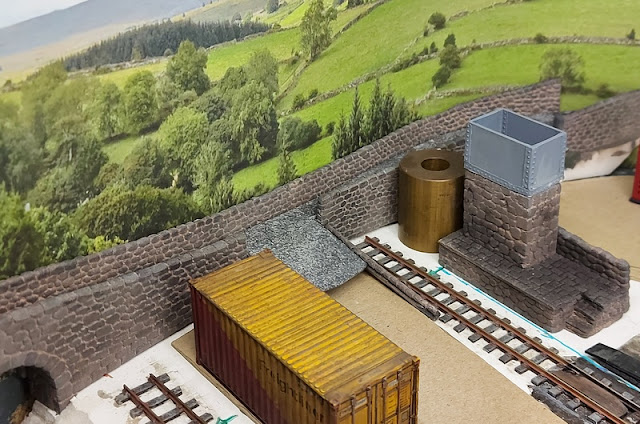 One area I am unsure of is the painting of the stonework. I used acrylics with a grey coat mixed with PVA to strengthen the foam, onto which individual stones were picked out, unified with a thin wash, then the mortar added from weathering powders mixed with talc. The effect looks OK, but it is perhaps a little dark, and looks much darker brown than the station. 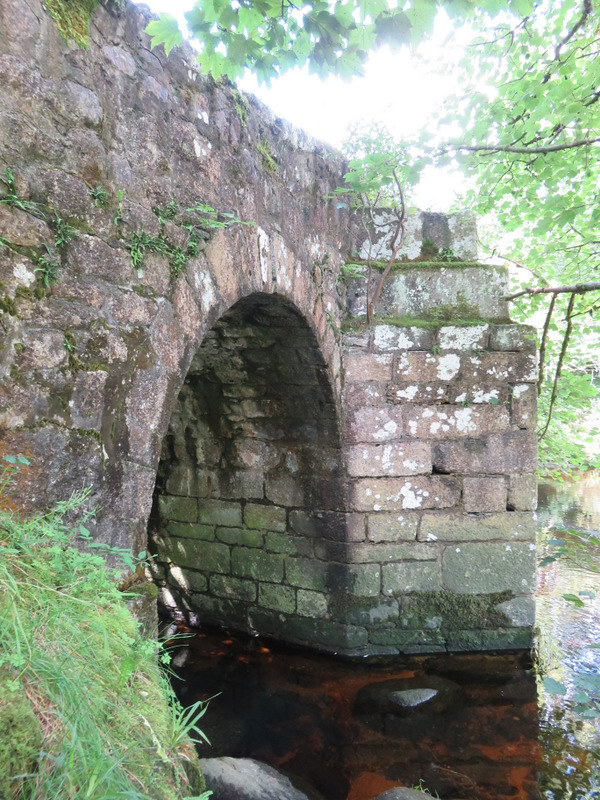 The real stonework colour of course varies with ambient lighting and weather, moss and damp, so hard to say. 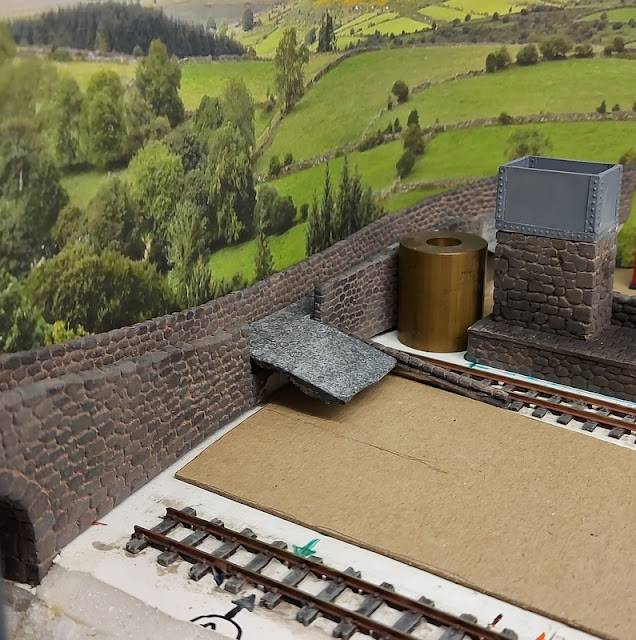 The roadway is also foam, with talc sprinkled over the wet grey paint. It's not come out as well as when Gordon Gravett does it... 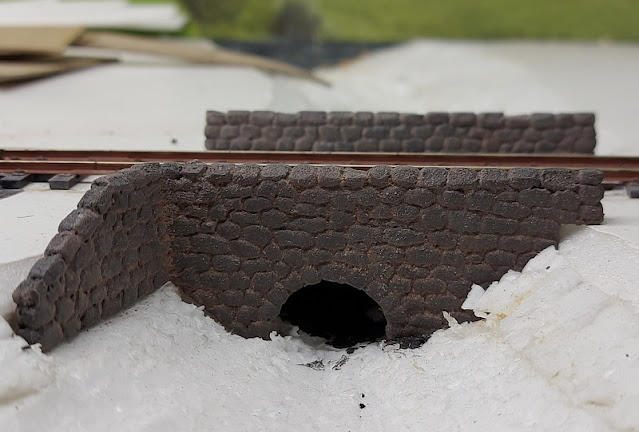 The little bridge has also had the stone treatment. Again, I think too dark?
Posted by Michael Campbell at 22:27 3 comments: