Expo-NG was billed as the last showing of the Upsands Downs & Evaleight Railway, so it was appropriate to run a last train along the complete line. Thus towards the end of the show an unusual consist was formed at Upsands Harbour, with 8 coaches it was double the length of a regular train. It was both double-headed and banked by three Hunslet 2-6-0 tanks rather similar (but very slightly smaller) than those on the Tralee & Dingle Railway. 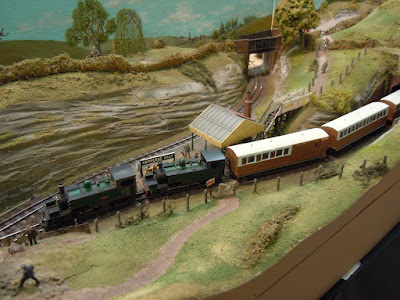 Shortly after leaving Upsands the train comes to Gryndene Halt. 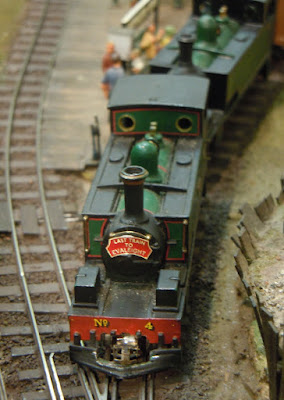 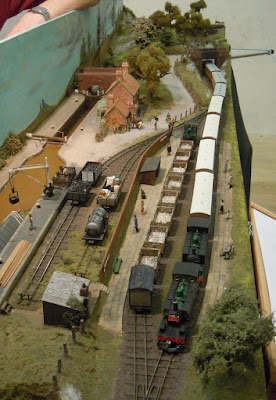 At Wharf Cut (if you are thinking that station name is missing an awful pun, the W has fallen off the sign) the special train passes a quarry train returning from the brickworks, presumably for the last time. Of course the train is too long for the loop, so other trains had to be diverted to the fiddle yard to clear the line. 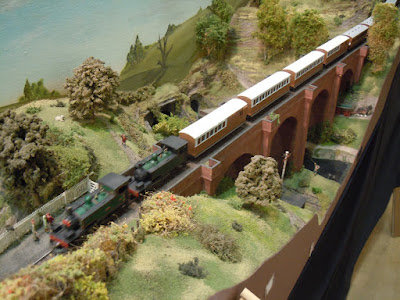 The viaduct is usually a good place to photo a train, but this one doesn't fit in shot. 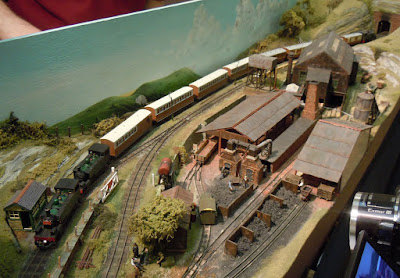 After the final tunnel the special train passes the brickworks, where the battered diesel shunter is parked up. Here we just get a glimpse of the banker loco just exiting the tunnel, but the strain of three mechanisms started to trip the controller so the banker was decoupled here. 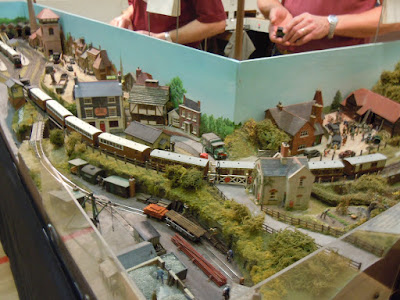 Crossing the level crossing on the curve into Evaleight, the railway PW depot is in the foreground. 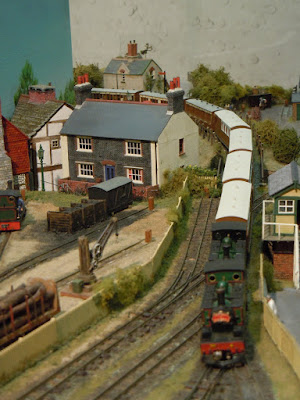 Entering the station, with the goods yard to the left. 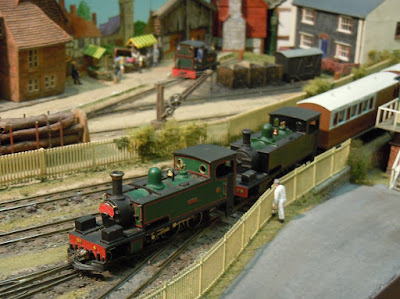 The "last" train actually managed a few trips up and down the line by the end of the show.

So what now for Evaleight? Well there are no immediate plans, but a new smaller and more easily transported layout is being planned. Meanwhile the smaller modules (Evaleight and Upsands) may still get exhibited individually, subject to sufficient estate cars being available, and there is a proposal to rebuilt parts of the layout to allow a smaller version to emerge - so not all of it will get sold or broken up.
Posted by Michael Campbell at 22:12 No comments:

It was a long weekend. We set out soon after 3pm Friday to pick up the layout, which filled a van, two estate cars, and a small hatch-back, with no space to spare. The convoy then set off - in search of a suitable dining place! Refreshed we resumed the journey to Swanley and started the unloading and setting up. With my 8-year old Son I had to leave for the hotel first (it was in any case a very late night for him!), but we were back at 8am to finish the set-up. 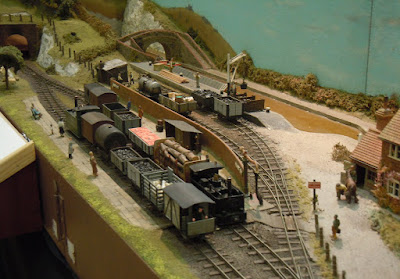 The layout ran reasonably well despite a few niggles, and occasional chaos when we got confused over the sequence. But the testing and practice paid off, and we kept things moving, though over lunch-time lack of operators meant the brickworks and quarry were "mothballed". 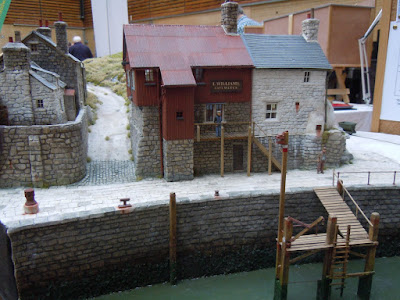 So show viewing time was limited, but I did get an hour or so - and I was pleased to see Ynys Gwyntog (in O14) by the late Bob Barlow, editor of Narrow Gauge and Industrial Railway Review. I missed seeing Bob, although I'd only met him briefly on a few occasions and exchanged emails, he was always bubbling with friendly enthusiasm. It's great to see he was a truly accomplished modeller too. 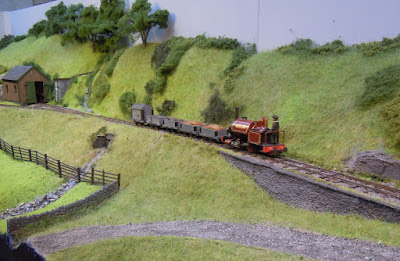 This model of  the Talyllyn Railway in 1865 (the year it opened) in 5.5mm scale, 12mm gauge, by Tim Ticknell, is unusual and fascinating. We're used to seeing Talyllyn and Dolgoch preserved and shiny, or decrepit and just holding the line together, but in brand-new condition in a relatively bare landscape makes an interesting scene. I'd been looking forward to seeing Creech Bottom (009) by James Hilton since seeing it on-line, and in Railway Modeller a few months back. It has just as much atmosphere in the flesh, and Jame's superb loco collection looks right at home. It just shows that simple can be so very effective. 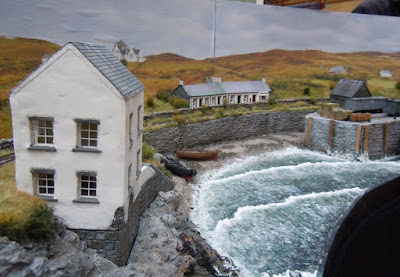 I've been watching Tom Dauben develop Isle Ornsay (009) for some years and it now looks largely complete - though Tom would point out there is a lot still to do. The scenic work is top notch already though, and I don't think I have ever seen sea modelled so convincingly as that. Even without a train this scene is full of interest and character.

I could go on, there were so many excellent layouts, but instead I'll point you to the full set of photos I've uploaded. I got a lot of pictures, partly to compensate for having little time to look at the layouts, but some are rather hurried. Apologies if I saw you but didn't have time for a proper chat, or just missed you, but even so it was good to see so many familiar friendly faces.

Finally, Peco had been entrusted with Heljan's prototype Lynton & Barnstaple Manning Wardle 2-6-2, due to be released as the first mass-produced ready-to-run 009 loco sometime next year. Andrew Burnham obviously decided it needed to be demonstrated on a layout, so it appeared at Evaleight: 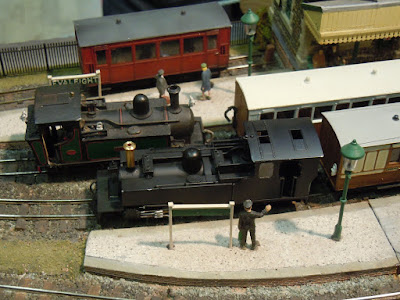 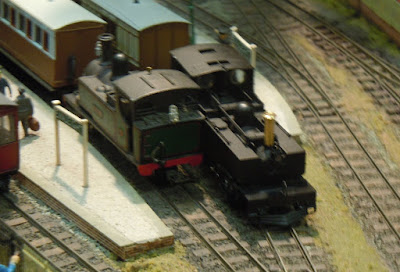 My shots are not great as first I was the wrong side of the layout and had the backscene in the way, then found the viewing side was packed with people wanting a good look! Anyway despite being without livery and appearing to have had some demanding testing already, it looked finely detailed and seemed to run very smoothly. I'll have to start saving....
Posted by Michael Campbell at 00:20 3 comments: