Once again the last Saturday of October is a highlight of the narrow-gauge modeller's year, yes it is EXPO-NG time. This year I was "helping" to man the 009 society stand with the Sussex Downs group, this consists of a showcase (well, two this year), a simple roundy-roundy track to add interest, some posters and leaflets, and a couple of us "demonstrating". I took along a few coach kits and made a start, when I went to look round Phil Savage couldn't help himself and carried on (meaning some real progress was actually made!). Here he is at work, with Paul Davies pretending not to know him. 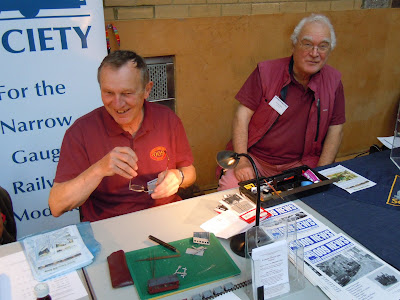 I had been really looking forward to seeing Rae Bridge, part of Ted Polet's Craigcorrie & Dunalistair line, which was one of the inspiring layouts for me in my early days of 009. Having been extensively rebuilt in recent years the model was superb, and it was great to see Ted's work first hand, as Ted is Dutch so rarely exhibits in the UK. 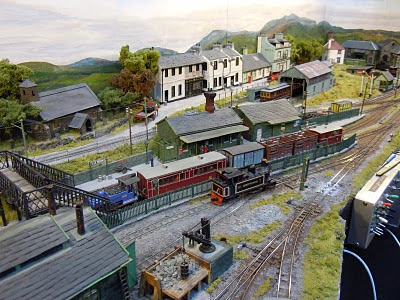 Another superb layout also came from the Netherlands, Henk Wust is becoming known as a master scenic modeller (previous layouts include Castle Rock) and his latest layout Punta Marina, set in an Itallian fishing village, was stunning. To be honest the trains are bit-players in Henk's layouts, for him it is the scenary that is most interesting, looking at it I could imagine being by the Med', sitting at that cafe ... 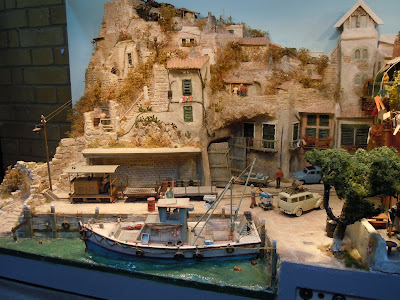 There were many other excellent layouts - I was pleased to be able to see "Sand and Gravel" built by Roy Link and exhibited by David Janes, a superb layout - but one I have been following progress on for some time now was Ryd Ddu by fellow blogger Colin Lea. This was it's first exhibition and it sounds like it was a close run thing to get it complete and working - with correct stock too - in time for the show. I watched the first train round the layout at 10.27AM. well done Colin! 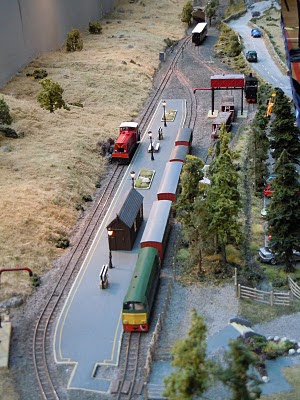 One thing I did think this year is that there could have been a few more layouts. Those that were there were of the highest standard, but two or three more would have made the exhibition feel so much more. There would have been space if they were smaller layouts. I guess there were no "challenge" entries, that normally take up space. (The challenge for 2011 sounds interesting ...!) However EXPO is as much about the trade as the layouts, and trade support was excellent. All round, a great day!
I've posted my better photos from the day here.

Posted by Michael Campbell at 23:29 2 comments:

Really enjoyed the Uckfield show yesterday. It's a bit of a drive but last year's was good, and the list of layouts looked interesting, so made the trip - and it was well worth it. As someone who enjoys narrow-gauge and unusual layouts, I appreciated the 4 NG layouts (009, 0-16.5, 0n30, Sn3), but also models of Wantage, Hemyock, Hospital Gates which was influenced by the Whittingham Asylym railway, plus others of pre-group period. In fact, I don't recall a predictable 60's BR layout ...?
In addition everthing seemed to be running faultlessly (yes, even the 009 layout!) which is great to see. Good trade support too, only fault was that it was rather crowded on Saturday afternoon, so difficult to get good photo angles! Definately one of the best "local" shows. For more pictures click here. 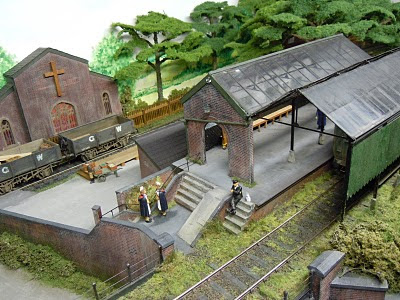 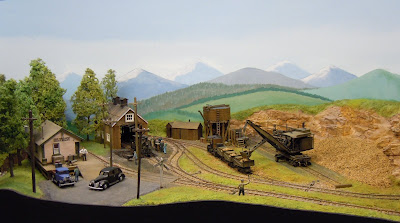 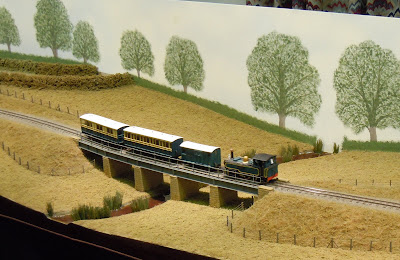 Posted by Michael Campbell at 22:57 3 comments:

I haven't been managing much modelling recently but I have just completed this car, which has slowly taken shape on the odd evenings I've got the tools out. It's a Morris 8 Tourer from the 1930's, using a Springside kit I actually picked up at EXPONG last October!

Although these days there are hoardes of excellent, cheap, scale model cars - ready-painted, nicely detailed, and ready to park on the layout - for some reason they are all post-war models, and just seemed too new for Awngate. So I was forced to use this kit, although it was an enjoyable excercise in white metal, when you think of building a kit-car you'd think of something bigger?!

For some reason I couldn't get the whitemetal hood to fit, I suspect that the kit designer forgot that the hood overlaps the body, so some serious butchery would have been required. I decided that it would be nice to model the car open, so to hide the lack of hood and rear-seat detail I made a tonneau cover from a bit of brown envelope. 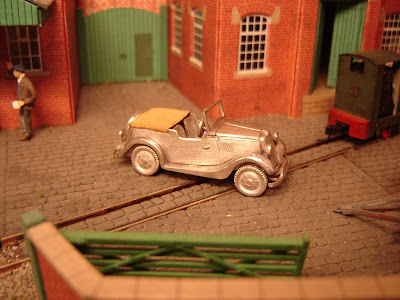 I googled for some images when it came to painting, and found I had a tin of red/maroon enamel which seemed to match the red ones nicely. It's gloss paint, which I don't normally use, but here it has given the effect of a new and well-cared for car, as it would have been in the period of the model. Also the black mudguards are slighly gloss, contrasting with the matt tonneau and wheels. The finish may not be perfect, but given the vehicle is about an inch long, I'm as happy as I'll ever be! 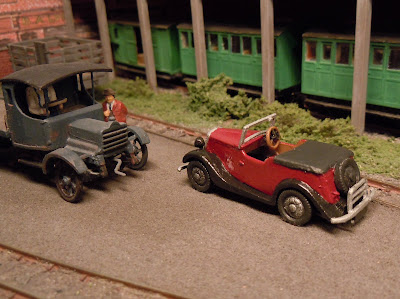 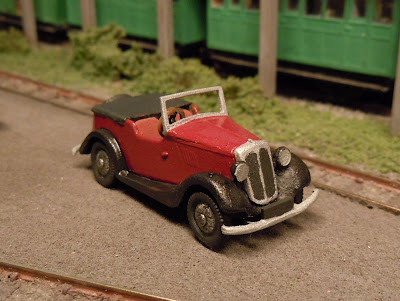 A few weeks ago we had a short holiday at Romney Sands Holiday Park in Kent. This was great for the kids, but even better, it just happened to have a narrow gauge (well, miniature) railway running through it! This photo was taken on the site, which also had it's own station on the Romney, Hythe & Dymchurch Railway. We made use of it! 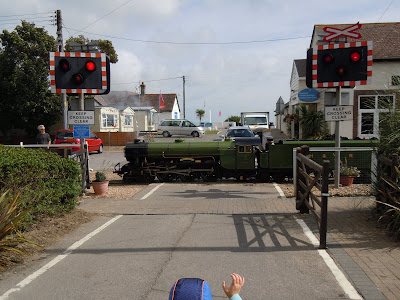 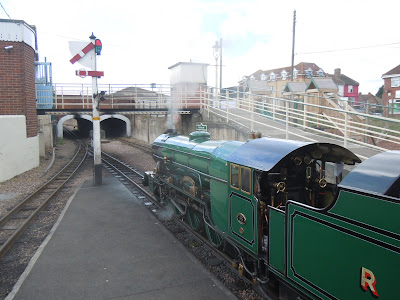 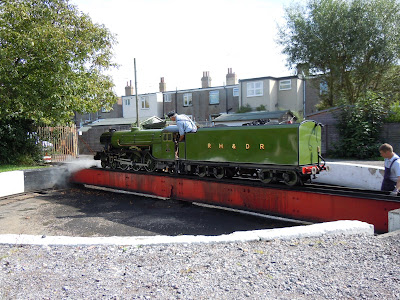 We also managed to fit in a visit to the Kent & East Sussex Railway, which is of course Standard Gauge, but was a light railway and the headquarters of the Colonel Stevens empire. Our train didn't really have the light railway feel, but the stations retain the charm and character. 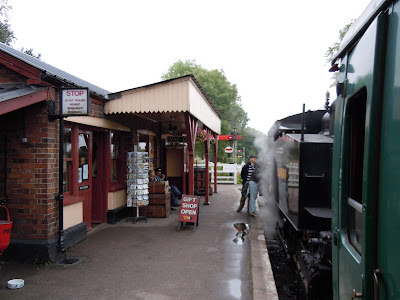 Posted by Michael Campbell at 22:15 No comments: