A little while back - well, 6 weeks ago - I went to the Uckfield Model Railway Exhibition. This, as I discovered a few years ago, is always an excellent show with good quality layouts and a range of useful traders. 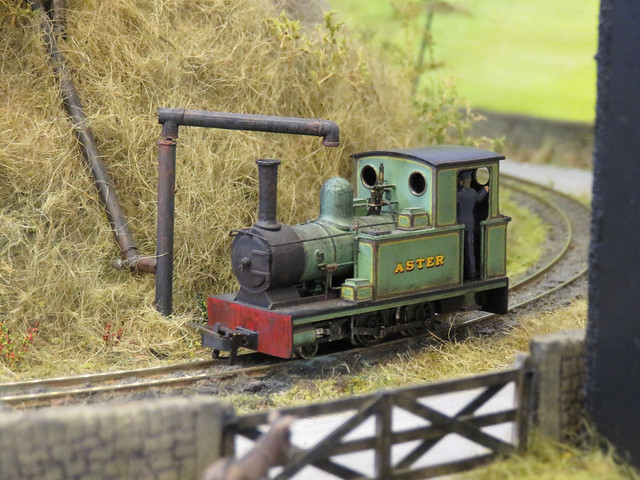 Star of the show for me was High Stamley (009) by Paul Windle. Paul is well known as a master builder of 009 locos (I have a few in my collection), but also builds superb layouts. This one may not have a lot in it, but is full of atmosphere - here the loco sits along side the road, the water crane swings out. 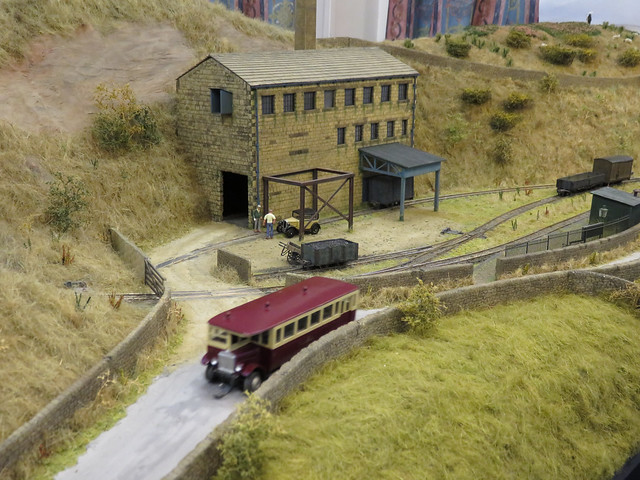 Even the road vehicles operate on High Stamley - that's an idea I'd like to use one day.

Castlederg (0012) by Andy Cundick is a model of the station of the Castlederg and Victoria Bridge Tramway in Ireland. A fine example of prototype modelling, and another side of Narrow Gauge modelling. 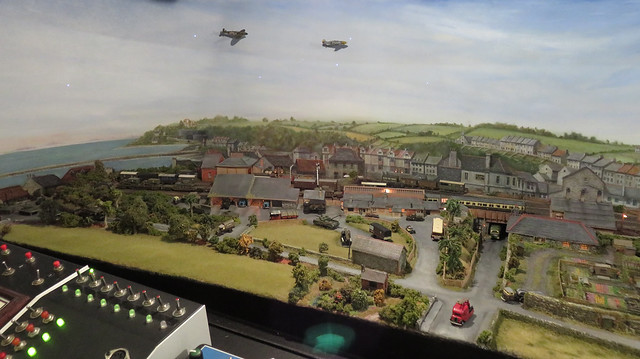 A stand-out layout was Brixham Bay (N) by Kevin & Judith Cartwright. To be honest the trains are a small part of the well presented layout, the buildings and backscene are superb and detailing - including the planes overhead - really sets the WWII scene. It even gets dark - with fibre-optic stars!

Finally Wadebridge (2mm Finescale) by John Greenwood, although incomplete it looks great, and clearly will be of a consistently high standard despite the size.

That's just a selection - there are a few more photos to enjoy here. But I'm sure it gives a taste of the quality of the layouts.
Posted by Michael Campbell at 21:49 No comments:

In my post about EXPO-NG last week I missed out a substantial section of the exhibition, the Dave Brewer Challenge layouts. Some years the challenge attracts a handful of entries, this was clearly a more popular year as there were 18 entries that made it to the show. The brief was a "tuning fork" layout - that is, a single point - with a size restriction of course, and yet there was a great variation in the layouts, and the range of imaginative settings. Some had finescale standards or obscure gauges, some had working features, some had stunning scenery, some characterful dereliction, some good presentation. Undoubtedly the standards were high, and judging must have been tough... 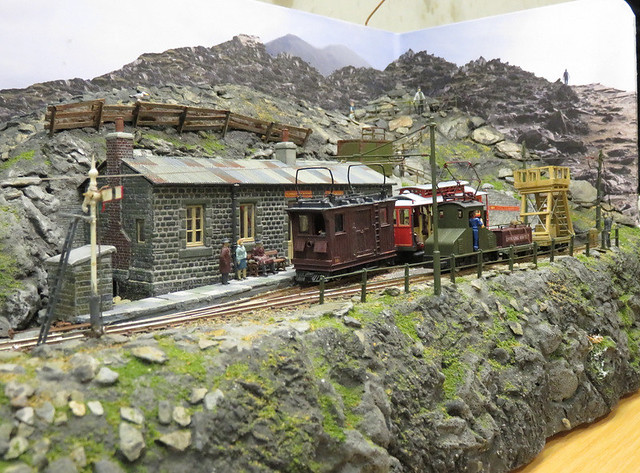 The winner was Creag Dhubh Summit in 009 by Ted Polet. As well as meeting the challenge, this serves as an extension to Ted's well-known Craigcorrie & Dunalistair layout based in Scotland, the layout represents the terminus of the branch to the summit of Creag Dhubh. You might detect that it is heavily inspired by the Snowdon and Isle of Man mountain railways, and the combination of a convincing premise and superb scenery make it a worthy winner. 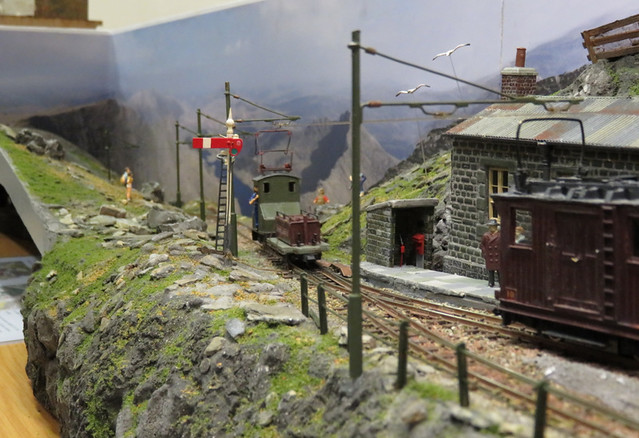 This shot shows Creag Dhubh Summit linked to the extension/link piece "the ridge" that links the challenge entry board to the rest of the layout; these two sections sit over a fiddle yard on Ted's home layout. 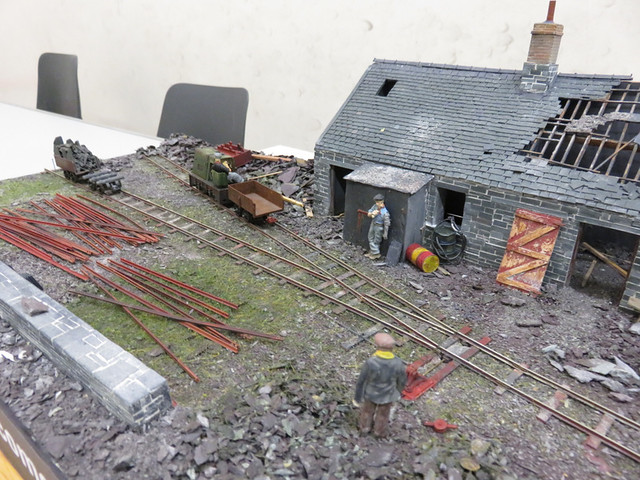 Runner-up was The Scrapman Cometh, an O14 model by Pete Wilson. Capturing the dereliction of the end of the working slate quarries in North Wales, it featured a working stub point for double-flanged wheels - clever, as well as characterful. 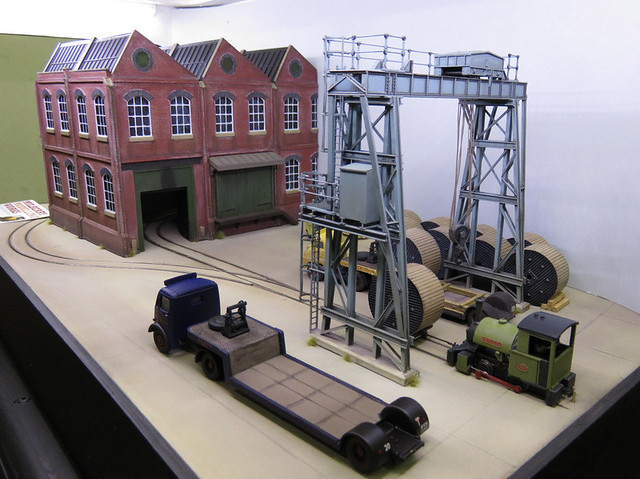 One of my favourites was Beta Cables, this model based on a real factory with a 3' 6" gauge line was modelled in 4mm scale, with 14mm gauge, by Stuart Brewer. So a technical challenge, with prototypically unusual locos and stock, well executed and smartly presented too. 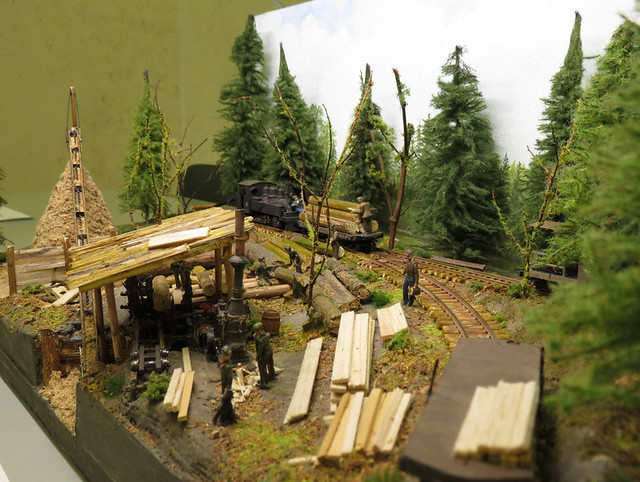 Lost River Logging Railroad in HOe by Peter Smith depicted a US logging scene, with a well detailed sawmill and even logging line track with round-log sleepers. 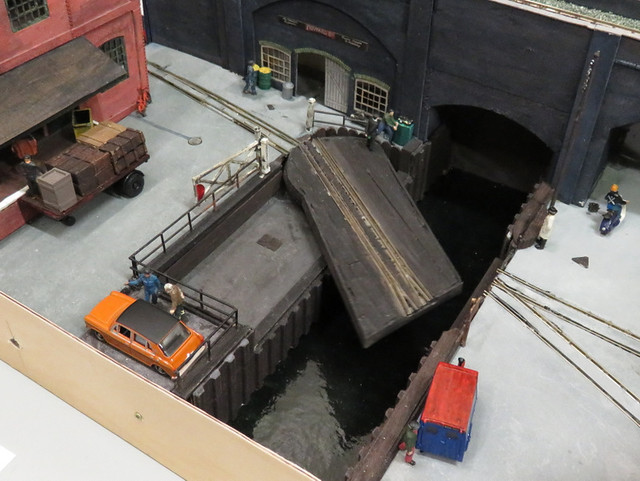 For more originality and technical difficulty, look at Rantners Wharf in 009 by Roy Jamson. It featured a working swing bridge with interlaced / gauntlet track through the elongated point. 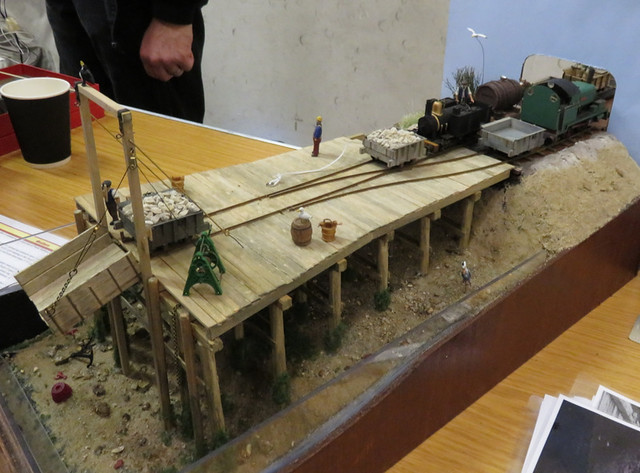 While Letter to Goathorn (in 7mm scale, 26.25mm gauge) by Peter Hollins had real water! 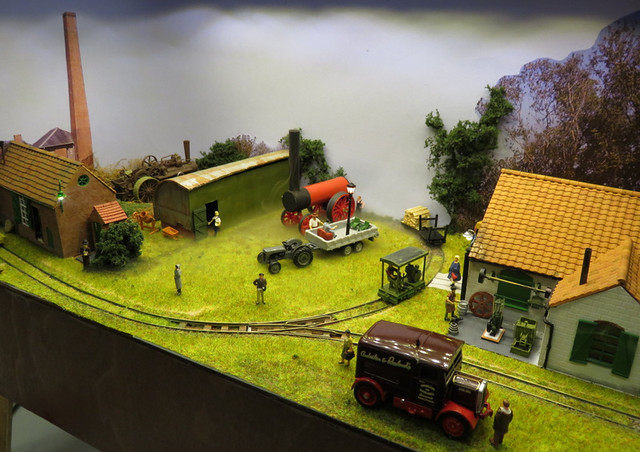 Weston Zoyland in 009 by Toby Hollins-Jones was based on the preserved pumping station. I've never visited but the layout perfectly captured the scene from the photos I've seen. with suitable exhibits - even steam from the chimney of the stationary engine. An impressive model, and as I understand, built by a teenager.

I've not space here to show all 18 so I must stop there, but you can see them all here. I'm sure you'll agree that once again the EXPO challenge has successfully demonstrated the broad nature of narrow gauge, and a high standard of modelling.
Posted by Michael Campbell at 22:42 No comments: