Site clearance has started at the top end of Awngate station! Two trees have been felled, bushes cleared, and the embankment near the water crane cut back, exposing some strange white spongy soil ... 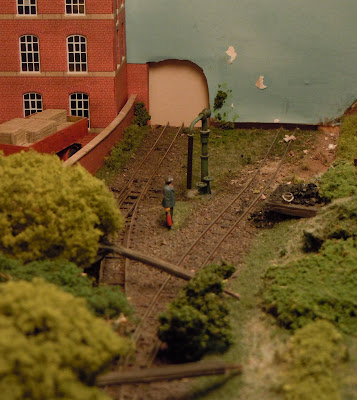 I've always intended there to be an engine shed at this end of the layout to act as view-break, as well as some foreground interest. However the site is quite cramped, so to ensure the structure will fit and look right, I've used some cereal packet card to mock up the size and shape. This saves spending time building a structure only to wish I'd done it differently ... 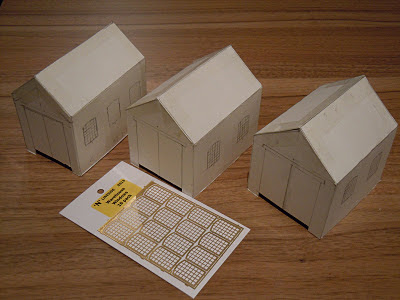 Actually I've had three goes here! From left to right the shed has got 5mm shorter in length and 5mm wider with each iteration, and the height has varied too. In the foreground are some N-scale factory windows which I think will work well for this building. 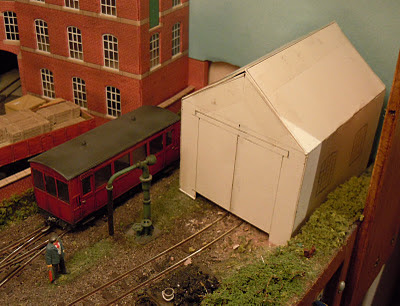 This is the third iteration roughly in place on the layout, the railcar shows there is ample clearance to the "main" line, while the shed appears wide enough for maintenance to happen on the loco inside. From this angle the exit hole in the backscene can still be seen, but from a more normal viewing angle the shed hides it nicely. The shed is quite short, but long enough for the typical locos used on the layout, and anyway most of the building is hidden behind the "wing" that hides the end of the backscene so the length is not apparent. For that matter, I might not bother with the window to the right ...

The question now is what materials to build it from. I was thinking brick walls with a corrugated roof, for a reasonably substantial structure to match the station, a slate roof might give an older appearance. But perhaps a wooden structure with a corrugated roof, or a completely corrugated structure, would add a little variety. After all there is plenty of brickwork on the layout. I've also been looking for prototype inspiration, and considering putting a water tank on the roof for interest. Any thoughts?

Posted by Michael Campbell at 23:13 2 comments:

Since this is the first post of 2012, may I wish a Happy New Year to all readers. I know we are already a week in to this "Olympic" year (does anyone else think they will be bored of the Olympics before they even start?), but I have contracted my usual post-Christmas cold, leaving me with little energy for picking up the modelling of an evening. And anyway, the way I am coughing now, holding a scalpel would be dangerous! Fortunately for you the common cold is not a virus that can be spread via the internet.

Last year proved a busy one for my modelling, as I couldn't resist entering the EXPO-NG Dave Brewer Challenge, and a year ago I was hacking about a box-file and building track for the first time. The whole project took me in new directions and was great fun, and the result  Landswood Park even won the competition! While I was building that I also had an invitation for Awngate to be shown at EXPO-NG too, which as one of the biggest NG shows in the UK, was a great honour. So I also spent some time upgrading and completing some of the scenics, and finishing some stock, and of course the day of the show was rather busy! The concentrated effort to have both layouts ready resulted in a lot to report on this blog, with my busiest year yet averaging 5 posts per month.

So what will 2012 bring? Well probably not quite so much modelling activity, but Awngate is booked to appear at Narrow Gauge South at Winchester in April (another of the big NG shows!), and I have a few jobs I'd like to do by then. There is the possibility of further shows later too. I have some ideas for locos and rolling stock to build, although that will probably be as I fancy, as there is already sufficient stock to run the layout.

Landswood Park may have no further purpose as the competition that it was built for has passed, but it is a fun little layout and I have enjoyed working in 014, so more wagons may appear. And a couple of months back I took delivery of a new project: 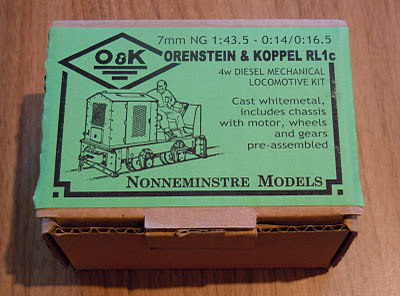 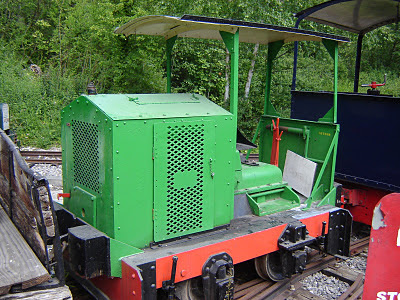 The photo above shows the prototype for the kit, an O&K RLc1 now at the Amberley Museum, not far from me, which I think it would be entirely suitable for a farm railway.

Posted by Michael Campbell at 13:57 2 comments: