I've finally got around to starting a railcar kit that I picked up at Expo NG in October. Well, I say kit, but it is a Worsley Works "Scratch Aid" kit, and consists simply of the sides, ends, and a floor for the railcar, etched in brass. I also got a Kato 4-wheel chassis that should fit nicely, albeit with somewhat small wheels, but I doubt that will be obvious when complete. So there will be quite a lot of extra work involved with this one, mating the body to the chassis (it isn't designed for any particular chassis), adding glazing, interior, a roof, underframe, and all the other details needed to complete the model. 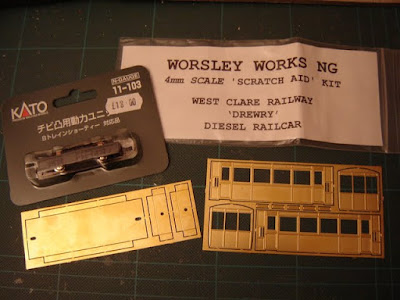 The prototype for this railcar was one Drewry supplied to the West Clare railway in Ireland in 1927, it was actually made by Baguley. Of course it was also 3' gauge, but it was quite small so will look fine against my stock, which is mostly based on 2' to 2'6" prototypes. The specs were:

Thanks to help from the NGRM forum, I also found some prototype photos, which seem quite hard to come by, at the Clare Library website, Here and Here. The Weston, Clevendon, and Portishead standard gauge light railway had a similar design of railcar from the same company, as seen here.

Now I've fancied a railcar for Awngate for a while, but many seemed to be too modern, required turning or running in pairs, or just looked a bit tricky to model! This one seems to have the right character, size, and being a generic sort of design from a company that sold to anyone (rather than a design associated with a certain line), it should seem at home on Awngate. I've already made a start on assembling the body, so more updates should follow soon.

Posted by Michael Campbell at 13:27 4 comments:

In my last post I mentioned I'd got a book on the Bowaters railway of Sittingbourne, inspired by my friend Rob who plans to model this line in 009. I've been looking through the pictures and soaking up the atmosphere of this characterful line, I knew little of it before but now I can see why Rob has been inspired to capture the system in model form.
Now Rob has started his own Blog to chronicle the planning and building of his model. Although he had ideas of a large layout of the whole system in his garage, he has now decided to start small and build a series of modules, and has a plan for the first one. Each can be a complete, operational, and exhibitable layout in it's own right, but together a picture of the whole system will be built up. I think this is a great idea as like me, Rob has work and family commitments for his time, but the modular approach means a completed layout will be achieved sooner. Also the models will not claim to be accurate renditions of exact spots - without a lot of space and time that would be impossible - but will aim to capture recognisable features and the character of the locations. I can't wait to see this layout progress!
If you have enjoyed seeing Rob's work with an airbrush and paintbrush, he has set up another Blog to showcase his talents in this area, and is open to commissions for both painting and kit-building.
Posted by Michael Campbell at 22:41 No comments: