The last couple of weekends I've been building a "domestic" fiddle yard for Hexworthy. If I exhibit it I'll use the large 5-track traverser/turntable I built for Awngate, but while ideal at exhibitions it is big (and frankly, ugly), and the Household Authority has made clear it is not welcome as a permanent addition to the lounge!

All I need at home is a couple of sidings, as I don't really do serious operation. The layout fills the bookcase so the sidings need to overhang (over the printer and hamster cage!). A slimline, low-profile design was needed. 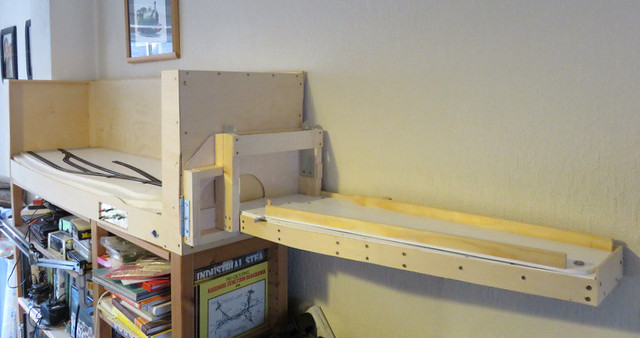 This is the result - a discrete tapering shelf, which attaches to the layout using the same split hinges. OK, the shelves need tidying, but the layout is reasonably neat. But if that is still too intrusive, simply lift the end up... 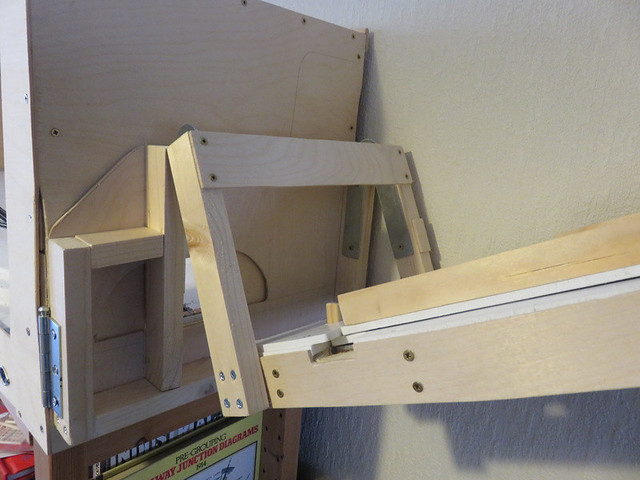 By use of some paste-table type hinges (left over from a previous incarnation of my son's trainset) the fiddle yard swings up, and over... 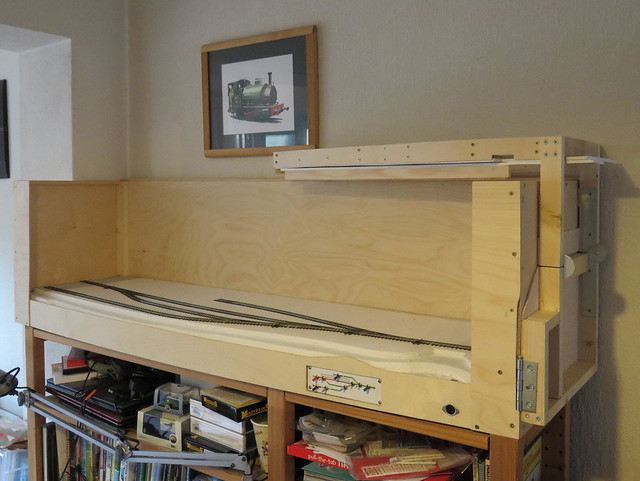 Until it is stowed over the layout. When I've made a lighting pelmet for the front of the layout the stowed fiddle yard will be largely hidden.

I had planned to make this a simple deck for a point and a couple of tracks, however this would have meant very short trains if the board was not to hit the ceiling! (Yes, I did check). The front edge track entry position, and tapering front edge, also made a useful arrangement of tracks tricky. However I realised a sector plate would work well - albeit, is more complex to make, especially as it has to hang upside down! 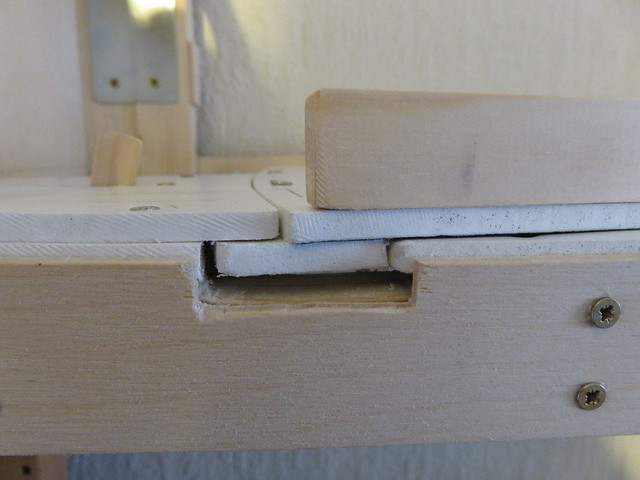 The deck of the fiddle yard is a double thickness of PVC foamboard, the top layer forming the sector plate supported on the lower deck. As seen here a lip was fitted to the rotating edge of the plate in a slot in the deck, supporting it when upside down - and hopefully ensuring no vertical movement of the deck tracks relative to the entry track.

Talking of track, the next job is to lay some!
Posted by Michael Campbell at 22:58 2 comments:

Last weekend Amberley Museum held their annual Rail Gala, I was there on the Saturday with the Sussex Downs 009 group demo / 009 society stand. There were some good narrow gauge layouts in the exhibition hall, while outside both steam locos operated an intensive service with most of the extensive selection of i/c locos running demonstration trains and generally having fun. There's a collection of photos here.

At lunchtime my son and I decided to eat our sandwiches on a bench at Brockham station, to enjoy the fine weather and the trains going by. This is the mid-point of the line where trains cross, and we watched a goods train set off behind a Hudson Hunslet diesel, before stopping suddenly... 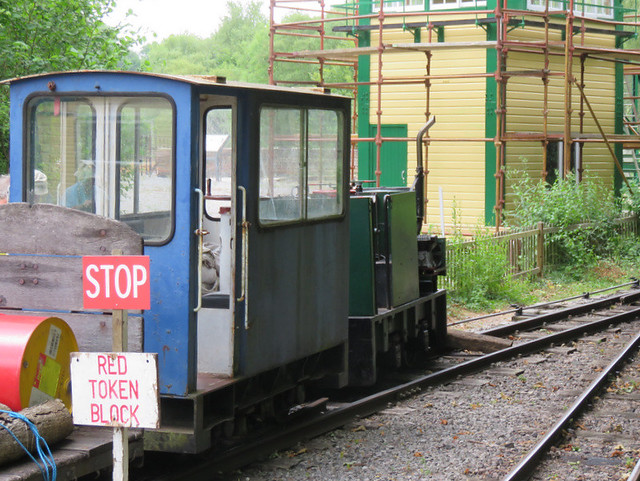 Caught out by the catch point! Oops. 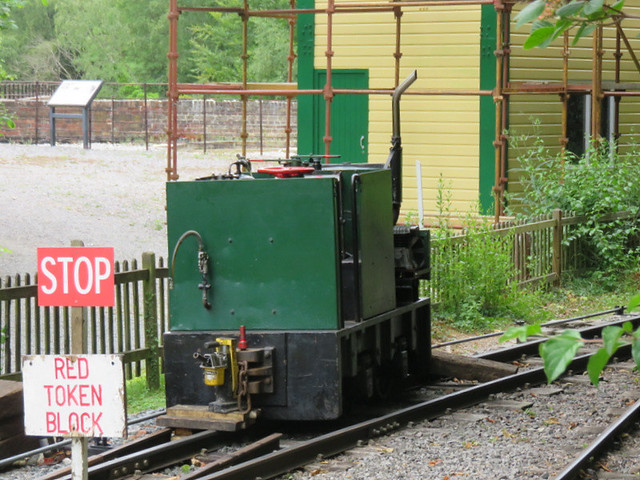 As you can see, the loco is well clear of the end of the rails. Even travelling slowly it takes a while to stop. So, out comes the jack and some big timbers. 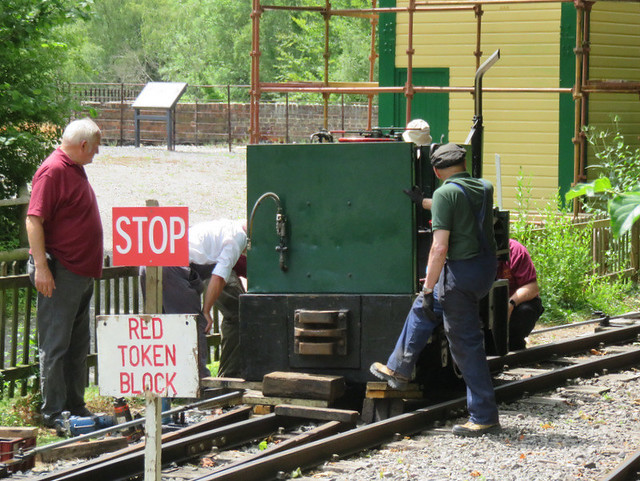 And slowly the loco is jacked up to be slid sideways onto the running rails. 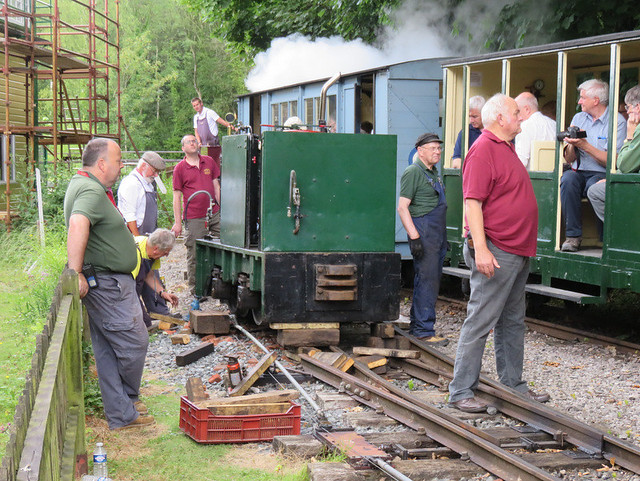 "Nothing to see here!"

The passing loop being blocked meant only one train running for a while. 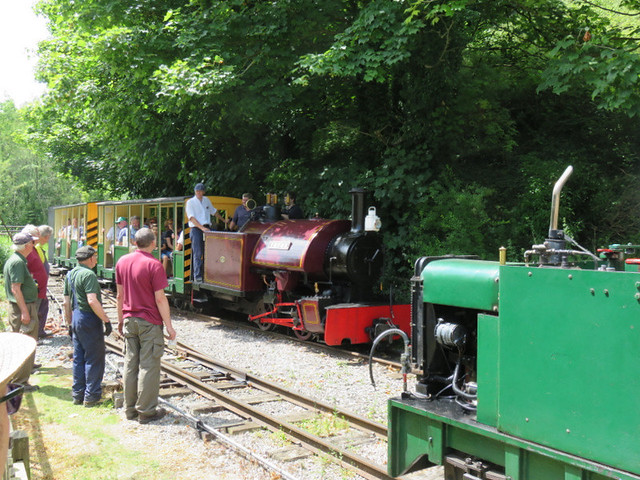 Finally re-railed, and with no damage except a slightly bent but functional point operating rod (and perhaps someone's pride), normal service was resumed. Still, it was an excellent demonstration chaps!
Posted by Michael Campbell at 23:34 2 comments: