Big exhibitions are back. It's been a while, but since restrictions lifted over the summer there have been a few exhibitions. It was a bit of a surprise to be invited to a big show - The Great Electric Train show in Milton Keynes (2nd and 3rd October) - and with not one, but two layouts. I will be taking Loctern Quay, and my Son Joshua will bring his Slugworth & Co. layout too.

The thought of exhibiting again brought realisation that some jobs needed doing. We've dusted and tested both layouts and their stock, although no need to clean track the graphite on the rails was touched up. A while ago Joshua bought a new loco at the 009 Society sales stand - this rather nice Lilliput 0-6-0 - which ran nicely but looked rather plasticky. Clearly it needed to look more realistic, but we had little time, so a touch-up and weathering was in order. I forgot to take a photo beforehand, but here's how it ended up: 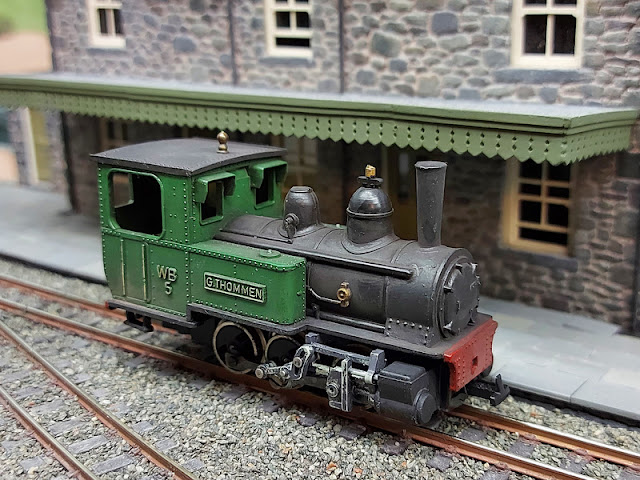 In the end I painted the smokebox, chimney, roof, and footplate matt black (the boiler staying black plastic), the buffer beams in red (the front was black, the rear green), and dry-brushed some brass onto some of the pipes and fittings on the boiler. The valve gear was dry-brushed a mix of gunmetal and silver, with some graphite rubbed onto the moving parts. The whole loco (except moving parts) then got a very thin wash of dirty brown to dull down the plastic and add some relief as well as a hint of grime, followed by a dusting of brown weathering powders on the lower parts and black on the roof and boiler top. This didn't take very long, but has made a massive difference. 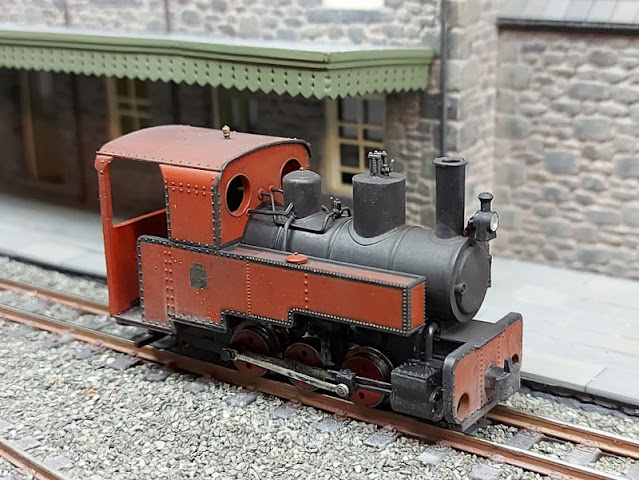 My Minitrains Decauville was treated to the same weathering treatment. Further detailing may follow, but like the Lilliput it was mostly self-coloured plastic, and the toning down and extra relief from the weathering adds a lot of realism. 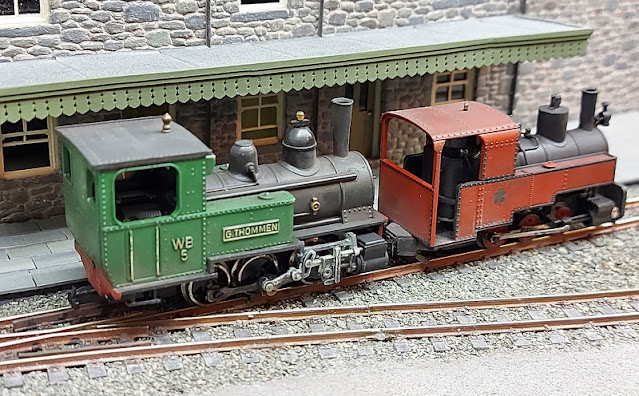 The Decauville has a Microtrains coupling fitted to the rear, but I'd still not got around to changing the front coupling as it looked tricky. This is quite useful, as it can operate on Loctern Quay and Slugworth - since on both layouts locos only need a coupling on one end. The Lilliput is a touch large for Slugworth - the cab barely clears the scenery on the corners, and the rear overhang is rather large - but we found some stock it will pull coupled to the front. I also changed couplings on a couple of small coaches I found for Joshua to run, from one of my early layouts.

As well as having spare locos I like to have spare controllers and power supplies for exhibitions, though I don't think I have ever had one fail. I have plenty of controllers, although one I'd picked up a year or so back still needed a plug fitting. I also have two power supply packs, but of course we will have two layouts, so a third could be useful. Slugworth & Co. only needs a controller input and a 16V supply for the lights, these are provided through a DIN plug, but with no point motors no CDU is required. I found an old Hornby 16V AC "wall-wart" transformer from Joshua's first train set, the rather nasty controller had failed but you never know when a transformer will come in useful! 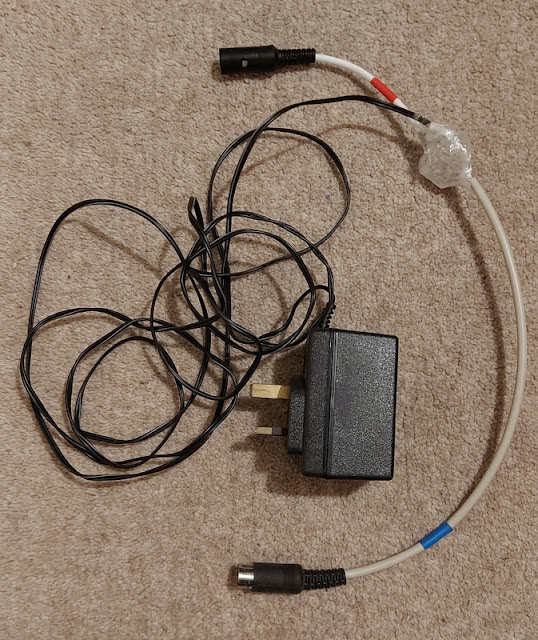 It's not pretty but it works! The controller plugs in the DIN socket at the top (with the red marker), taking its 16V AC input from the transformer. The DIN plug at the bottom (with the blue marker) plugs into the layout, providing the controller input, and 16V AC for the lights (the same supply that drives the controller will be able to manage the lights too, it is rated 800mA). It's actually quite a handy compact power supply for my micro-layouts that don't have point motors. Sometime I can mount the terminal block into a suitable box rather than clingfilm, but time is tight and it works!

So all is ready for the show, if you are there do say hi!

While on our family holiday near Okehampton in Devon, I met up with friend and fellow 009 modeller Tom Dauben, who lives in the area. Tom suggested we meet up a mile or so south of the town at a remote spot near Rowtor, on the edge of Dartmoor. This wasn't just so he could walk his dog, but because he'd discovered an interesting little narrow gauge railway... 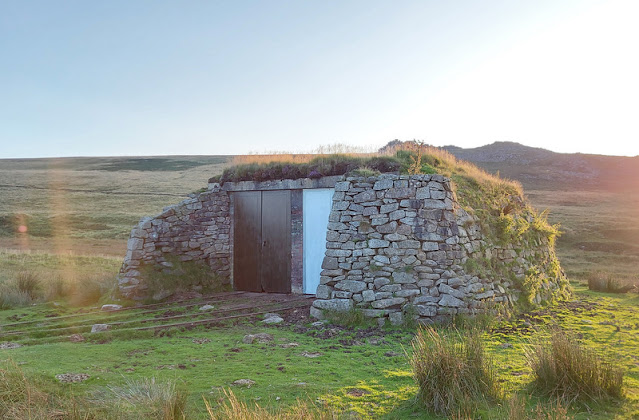 What could be mistaken for an ancient burial mound from the rear, or a bunker or gun emplacement from the side, turns out to be a small 2-road loco shed, with narrow gauge tracks emerging to the barren moorland. This is not far from Okehampton Camp army base and the railway was built as a moving target... 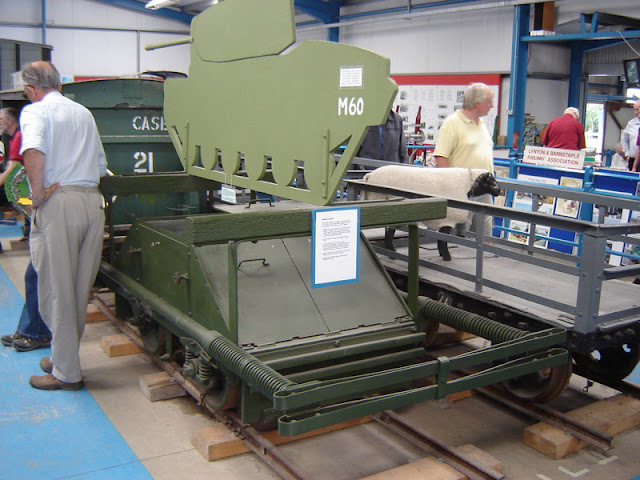 I was aware such lines existed, as this little trolley preserved at Amberley was from another. Built by Wickham the low body covers a petrol engine and it is set running, carrying a plywood (replaceable) target on top. Clearly it is not meant to carry passengers. This link shows a similar trolley exists at the Rowtor railway. 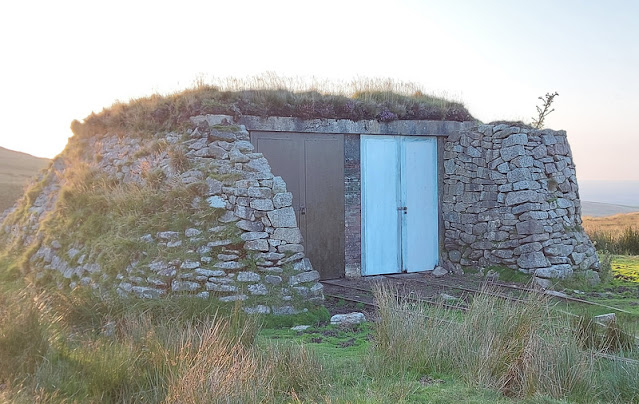 I suppose a bullet-proof engine shed is unusual? It may have been out of use for some years, but the doors show signs of maintenance, the right-hand doors having a fresh coat of primer by the look of it. Shining a light through a crack the frame of the trolley could just be made out, 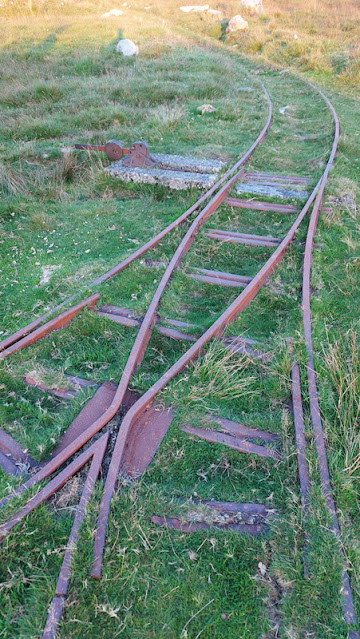 The track is of pre-fabricated steel type apparently ballasted with turf, according to the above link it is 2' 6" gauge. The points to the shed have levers although the turf seems to stop the blades moving now. 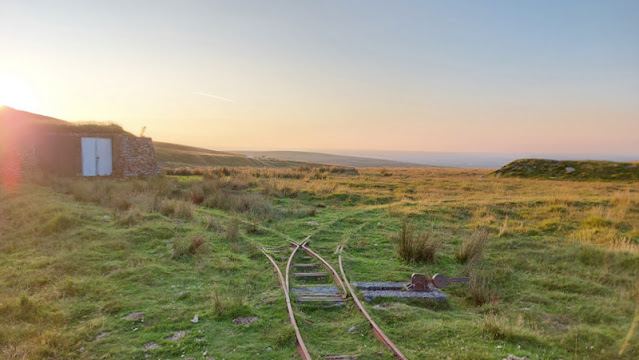 The other track from the points curves around into a balloon or reversing loop, and there is a similar loop at the other end. Between the rails in the spur to the shed a piece of bent rail sticks up, I presume to activate a trip switch to stop the trolley. 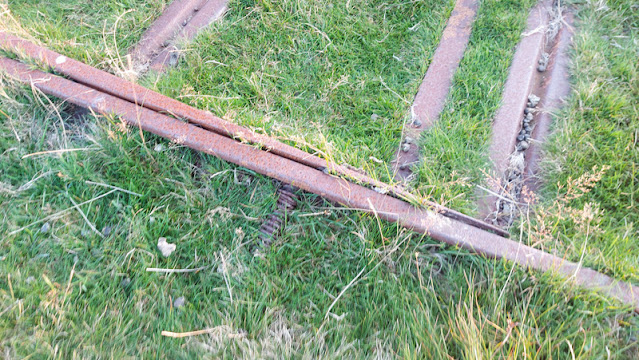 The balloon loop points at each end are sprung. 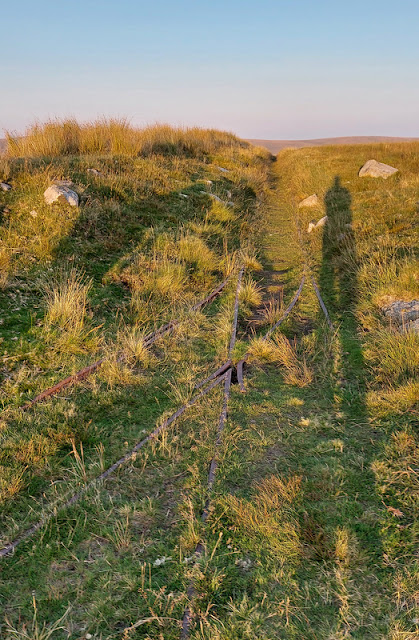 Between the balloon loops the tracks run in a shallow cutting behind an embankment. The trolley would be protected by the embankment with the plywood tank visible above, for the squaddies to shoot at. 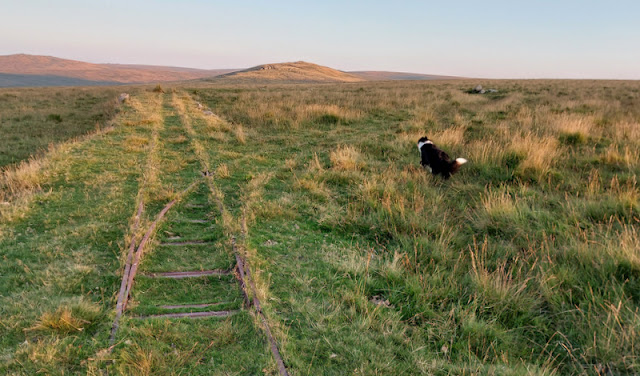 The loop at the other end looks even more desolate than the one at the shed end. Tom's dog was more interested in his ball.

The far end of the line curving behind the embankment, with Rowtor in the distance. It was a fine summer's evening and as you can see an absolutely stunning spot, as scenically spectacular as any narrow gauge railway. but it would be bleak in bad weather. The railway is small and there is little to see, but it's interesting, largely complete, and certainly unusual. Thanks Tom for showing me - and it was good to catch up!

Posted by Michael Campbell at 23:56 4 comments:

A couple of weeks ago we had a family holiday in Devon. Of course it was a great opportunity to visit Dartmoor and get some photos at Hexworthy to help with the scenery of my model. Here's the bridge over the West Dart river, taken from the upstream side. My imaginary station would be on the downstream side, on the left bank. 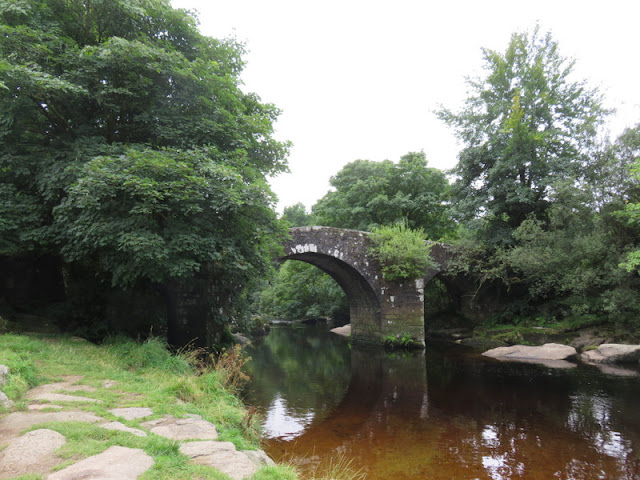 Unfortunately the downstream side is heavily wooded on both banks, making photography difficult. I wanted to see the river and riverbanks; the river has a deep brown colour and is strewn with rocks and boulders. 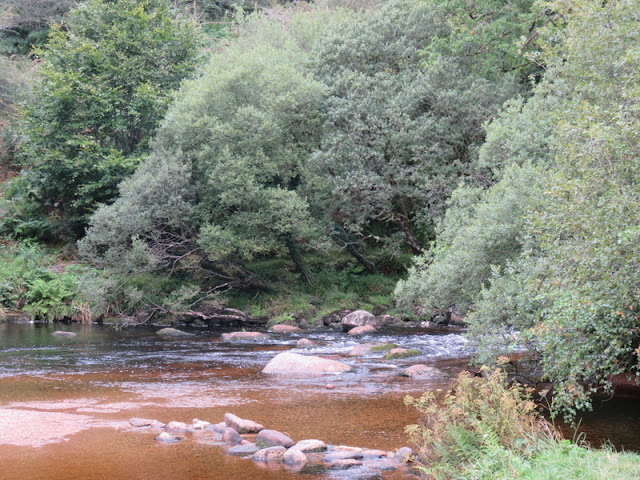 Later that day we took a ride on the South Devon Railway from Buckfastleigh. My imaginary line would have terminated in Buckfastleigh. It was nice to enjoy the steam train journey which follows the river Dart down to Totness, often running along the riverbank. 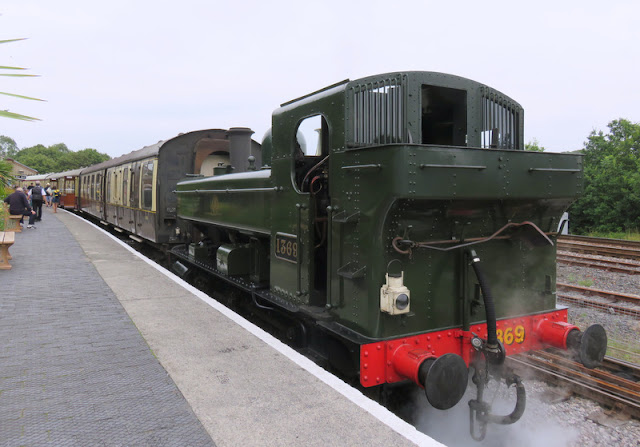 It's not easy to get good photographs when riding on the train or when it is in the station, and the Covid restrictions didn't help (e.g. limiting access to the platform before the train arrives and closing the footbridge). Still, the beautifully turned out pannier tank looked great. 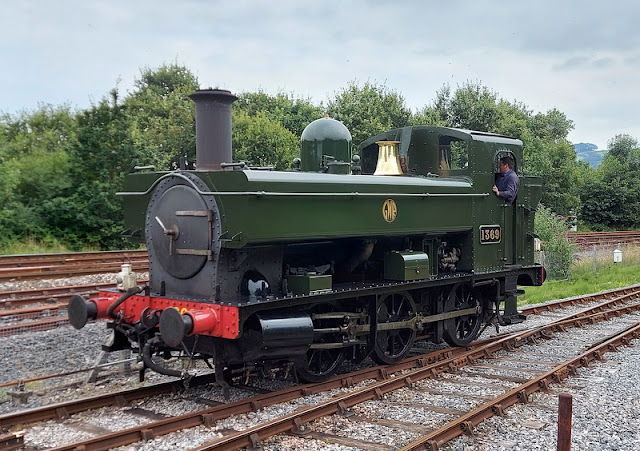 Later in the holiday we ended up on the beach at Goodrington Sands, which is possibly one of the most interesting beaches for railway enthusiasts due to the Dartmouth Steam Railway which climbs an embankment right behind the beach huts. The periodic passage of trains - which work hard climbing the bank with a loaded train of tourists - really adds to the holiday atmosphere. 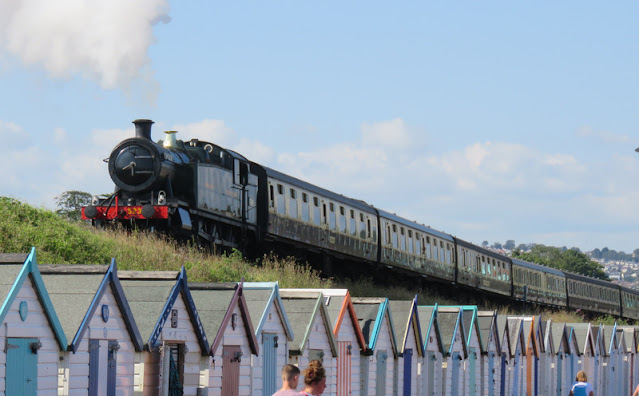 There was also the occasional light-engine movement as locos ran around their trains, which seemed to be terminating here rather than at Paignton. Sadly no time to ride the line this time, though we have travelled on it before, the other end of the line is by the river Dart opposite to Dartmouth. 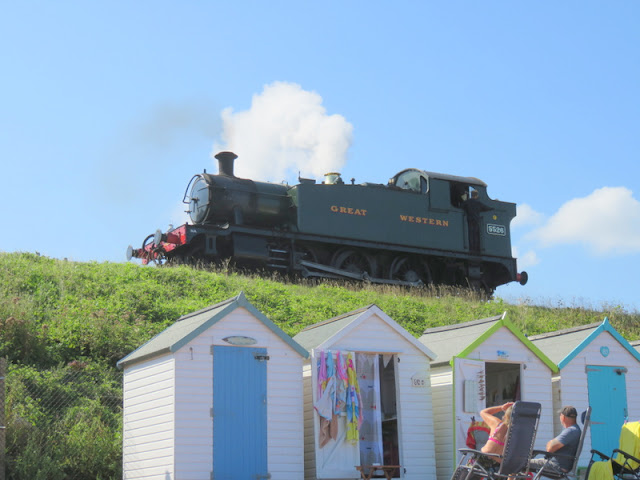 I must point out that our family holiday was not all about trains...!