I mentioned back in November that I'd acquired two of the Meridian MPD18 chassis kits, but despite only having bought them a month apart, one was for the Mk1 design and the other the Mk2 design. I built the Mk1 already so I thought I'd build the Mk2 and see how it compared.

There are some important differences in the design:
1) Top-hat type bushes are supplied for the axles
2) The axles are fitted into the chassis from below after assembly with bushes and gears
3) The layshaft is assembled in it's own carrier and fitted to the chassis from above
4) The pick-ups are suggested to be fitted to the upper side of the chassis, as I did for the Mk1 but not as the Mk1 instructions suggested.
5) The brackets for fitting to the Meridian body kits that use this chassis are changed, and look much improved. 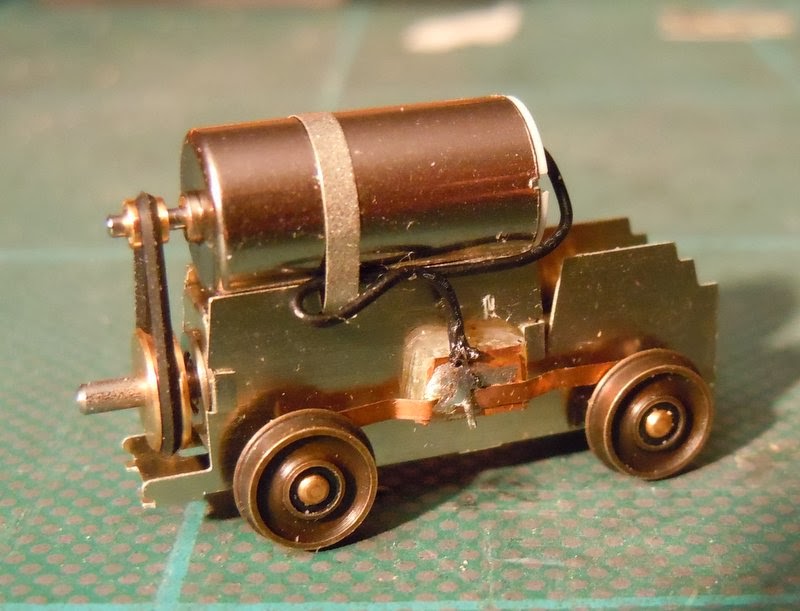 So here is the Mk2 assembled. No soldering is required except for the pick-up wires, and to attach the nut to the body fitting bracket (not shown), and can be put together in a couple of evenings' work. I did deviate from the instructions slightly:
- I used phosphor-bronze strip rather than the wire provided for pick-ups as I think it is more reliable with less drag
- I was concerned that the motor was not secure enough relying on the strap alone (there is no locating end-plate as on the Mk1) so used a little Bostik glue (the rubbery stuff) under the rear end. 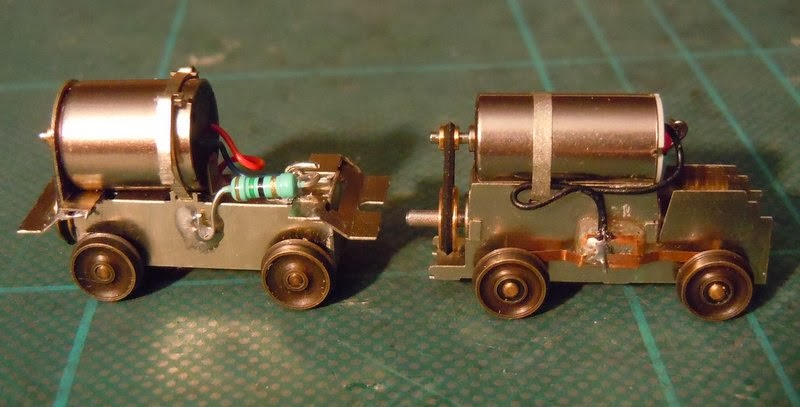 Side by side (Mk2 on right) the obvious difference is the size of the motor, the newer one is small making the chassis narrower, though it is mounted higher so they are about the same height overall. The wheels are the same, I think they would look better and probably pick-up power better if they were of a larger diameter. A shorter wheelbase (or variable options) might give the chassis a wider appeal for other prototypes. 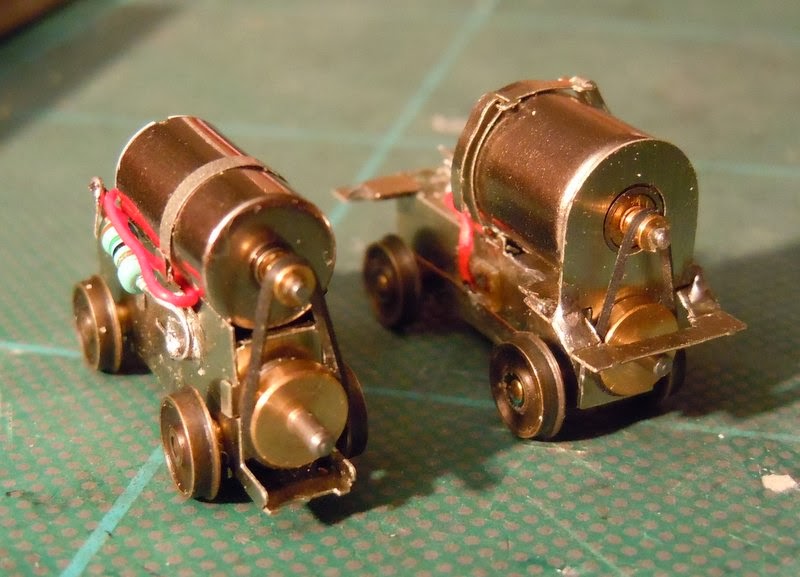 From the drive end (Mk2 on the left) it can be seen there is no motor locating plate, the newer design relies on the motor fitting into the chassis frames and the strap holding it secure. I think a locating plate as for the Mk1 design would be a good idea and the strap alone didn't seem to hold the motor securely enough. 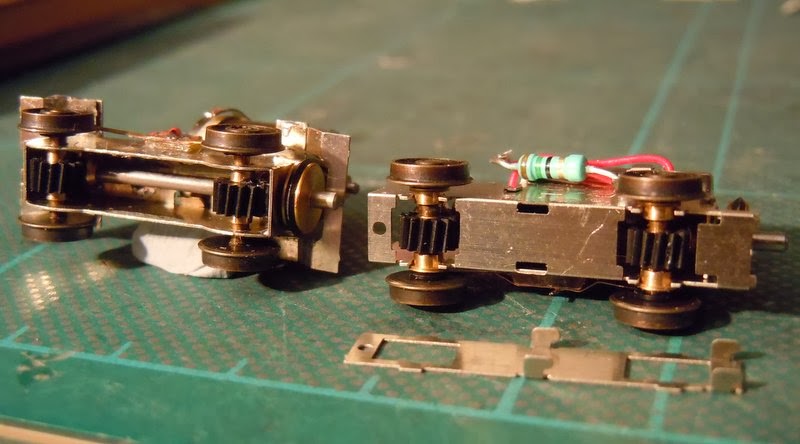 From below the removable axles with bushes of the Mk2 (right) can be seen, the keeper plate is held in place by the bolt that secures the chassis to the body. As well as providing a better wear surface for the moving parts this design is a vast improvement in terms of assembly, as the worm-gears and the adaptor tubes (to go from 1.5mm dia axle to 2mm dia gear) can be super-glued in place before the axle is fitted to the chassis. The Mk1 chassis required holes to be drilled in the brass tube to let the super-glue in, then the tube and gear have to be glued to the axle as it is passed through the chassis - difficult to do, with a high risk of gluing the axle solid!

So overall the Mk2 version of this chassis is much easier to assemble and should be more durable and easier to service in the future.
Posted by Michael Campbell at 22:54 2 comments:

Last Friday night featured, as forecast, gales and heavy rain, especially along the South Coast. Not the ideal evening then to load up the car and set off along the South Coast and into sodden Somerset for Narrow Gauge South West. However after a cautious drive with only a couple of minor floods, a fallen tree and a diversion, we made it safely to Shepton Mallet. 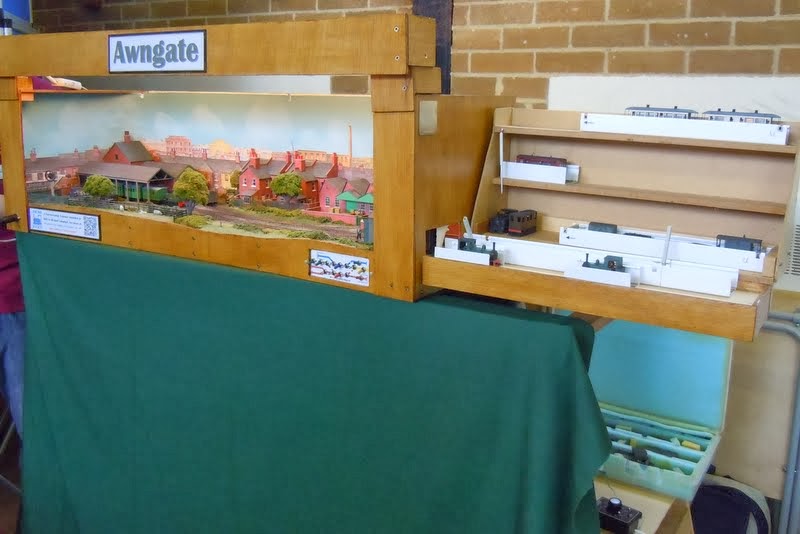 Awngate behaved well bar the odd reluctant coupling, so the effort the previous week was worthwhile. However with an hour to go before the end of the show a point motor failed - not one to a siding that could be ignored, but that from the platform to the run-round loop, necessitating some unusual working practices to keep things running! Still there were a lot of kind comments, and it was great to see a number of familiar and new faces. A big thanks to Tim Sanderson for riding shotgun and sharing the operating. 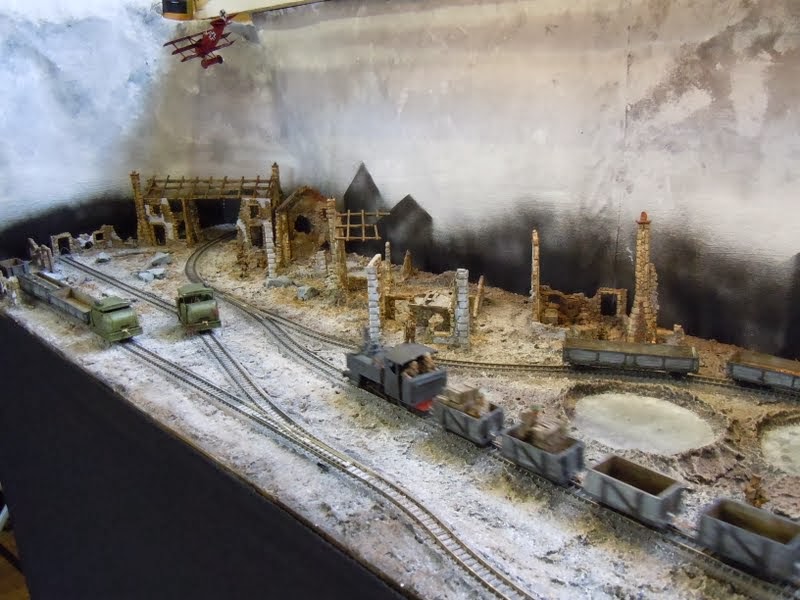 There were a lot of great layouts at the show, though I was particularly touched by the Wipers Fish Hook & Menin Railway by Matt Wildsmith. This is no romantic view of the Western Front, it is full of atmosphere and tragedy, but superbly modelled in S-Scale. 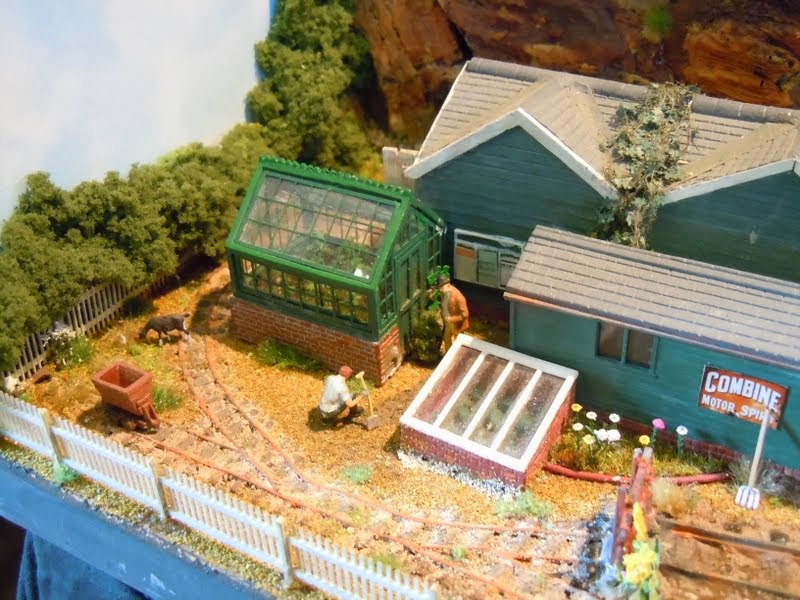 It was nice to see John Wooden's Isle of Stoner layout as featured on his Blog, it is surprisingly small but full of detail, like this corner featuring a plant nursery with hand-worked line! 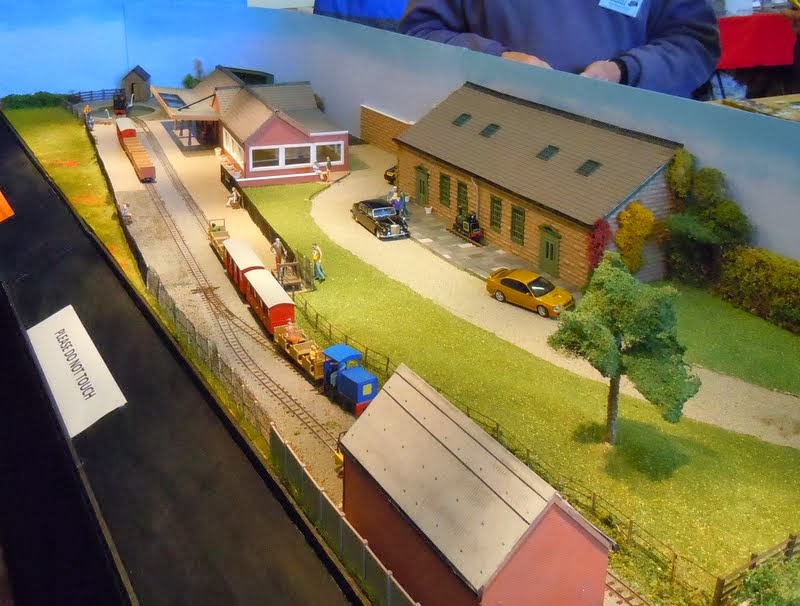 The Clee Valley Railway by Peter Leadley is a little unusual as it depicts a 15" pleasure line in O9 scale.

There were lots more great layouts but I'll leave you to browse the whole collection of my photos - though I'm sorry I haven't had time to add captions yet!
Posted by Michael Campbell at 22:37 No comments:

Awngate braced for a Storm!

The layout is as ready as it will be, and I'm packing up for Narrow Gauge South West in Shepton Mallet. However the weather forecast is for gales and heavy rain, including when I'll be loading the layout into the car and unloading Saturday morning. So it seemed wise for some last-minute thinking about protection for the layout. 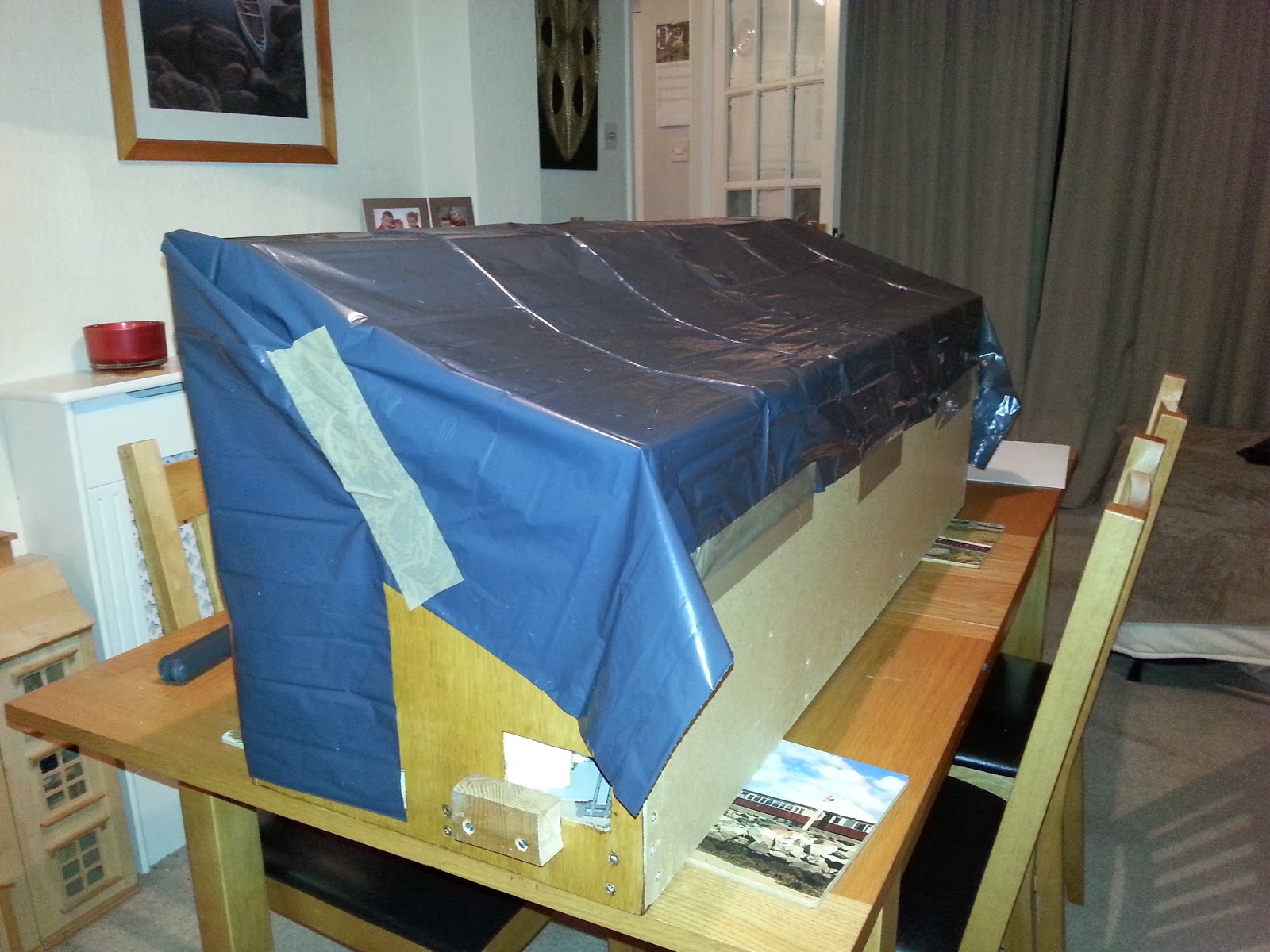 Apologies for the poor photos, but the solution is simple. Two black bin-bags are opened flat (but left double-thickness) and taped together, then taped to the back of the back-scene. The lighting bar makes a helpful rail to drape them over and some tape at the ends should stop too much flapping about. We shall see how effective this is, but it is better than a rain-splattered sky, uprooted trees, and missing roofs. That would be just too realistic! 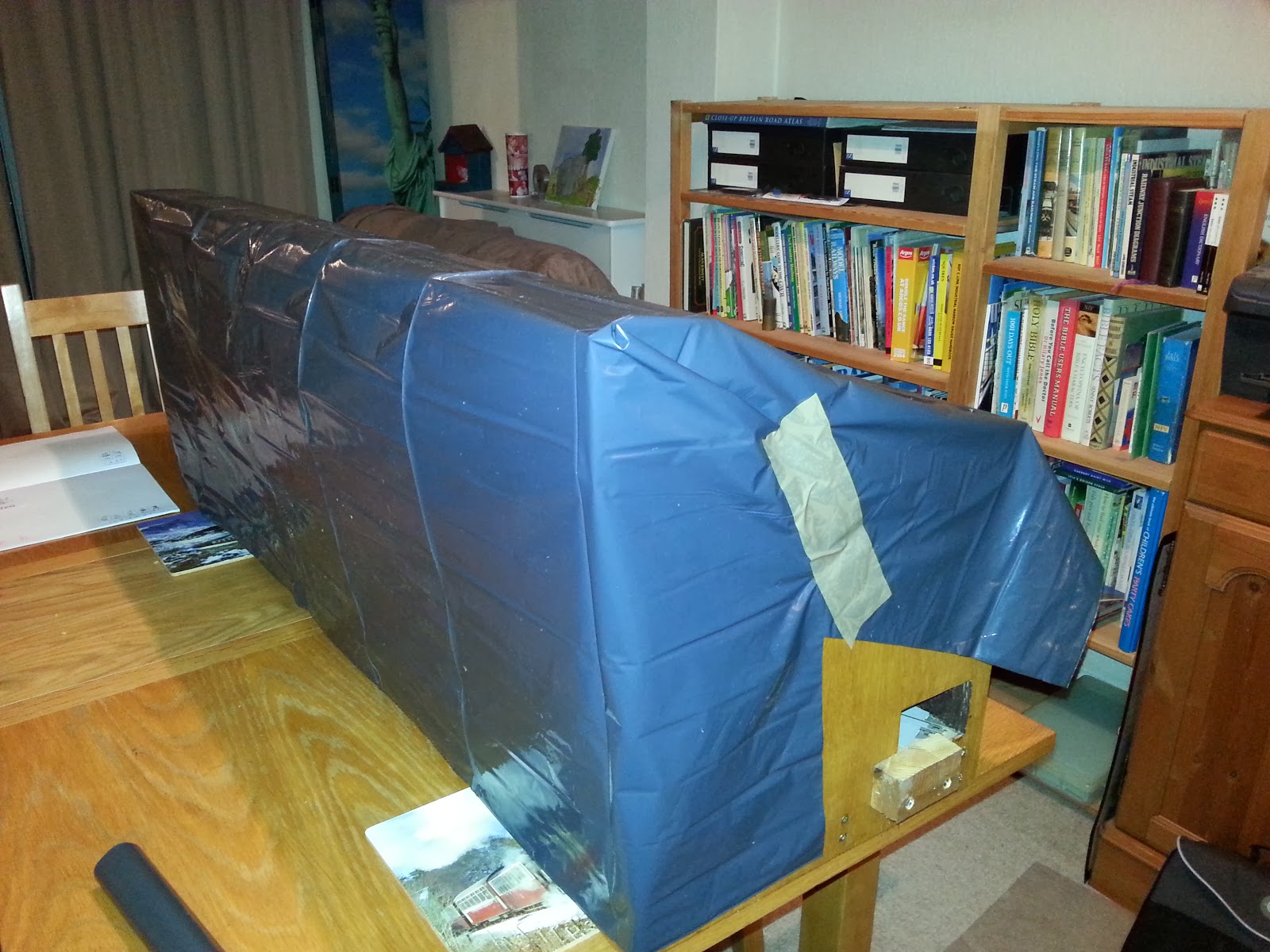 If you can get to the show it promises some excellent layouts, and do say hi...
Posted by Michael Campbell at 23:52 No comments: 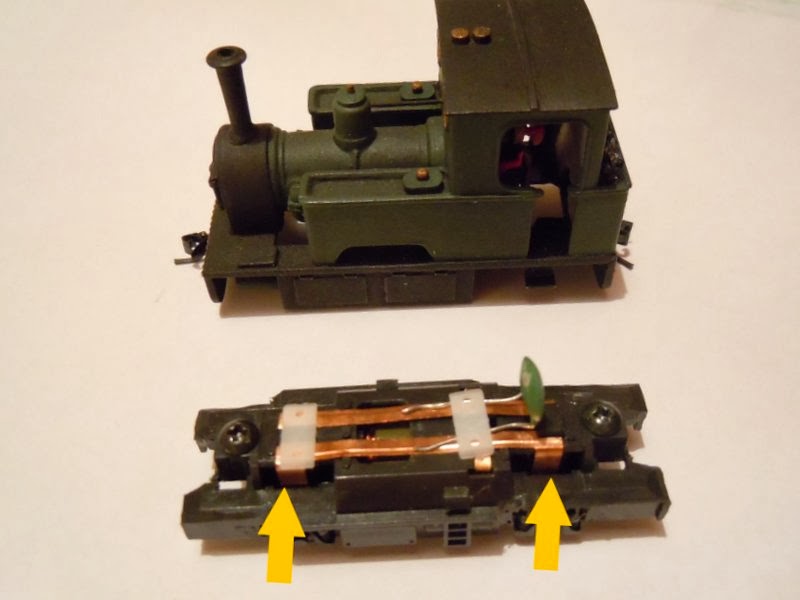 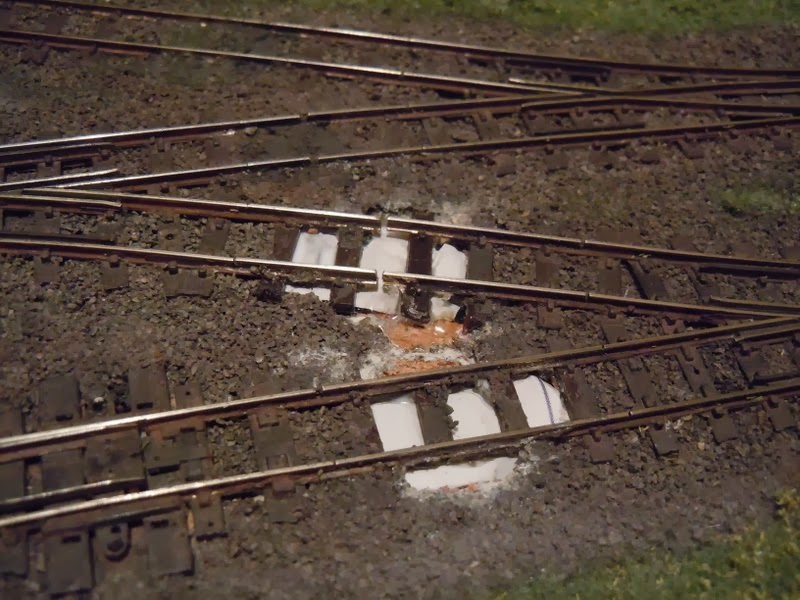 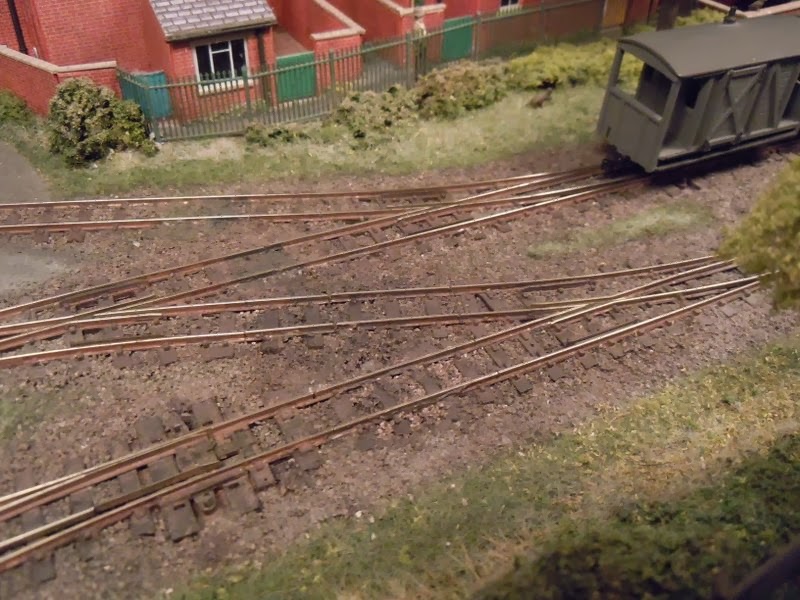