Thakeham will be at the Uckfield show on the 19th and 20th of this month, so with a couple of weekends to go I thought I'd better dig it out of the loft - where I think it has been for about 2 1/2 years - and check it over. 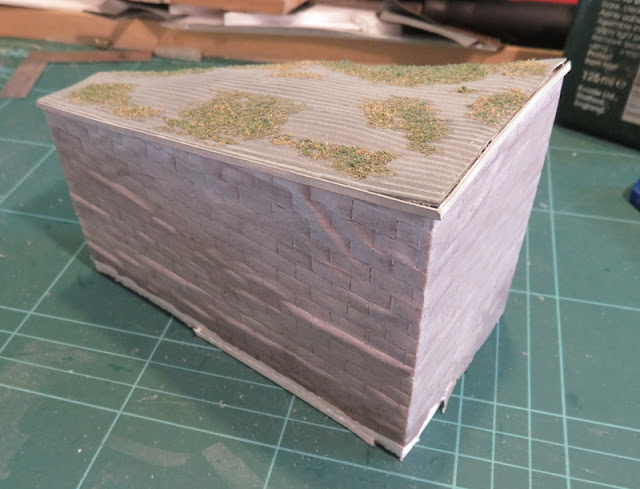 Despite being stored with silica gel sachets in the storage cover, the temperature and humidity variations in the loft have not been kind to the paper covered walls of this building. I think I used Pritt-Stick to fix the paper and it hasn't proved durable. The roof is also badly warped - this started soon after I made it as the corrugations were stuck on with contact adhesive, which seems to have reacted with the plastic - but even the added "moss" can't really disguise it now. 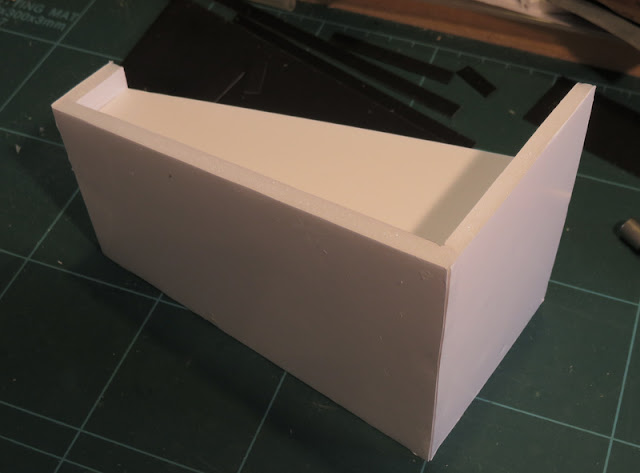 I figured the only answer was a replacement. Fortunately it's a very simple structure, being little more than a plain end wall and corner of a roof. A new foam-core structure was knocked up to the same external dimensions, though I increased the height of the right-hand wall slightly to increase the roof pitch a little. I printed out a new blockwork sheet from the Scalescenes file (the advantage of Scalescenes), this time fixing it on with a thin layer of PVA. I've found that doesn't cause wrinkles if thin enough, and I hope it will prove more durable. 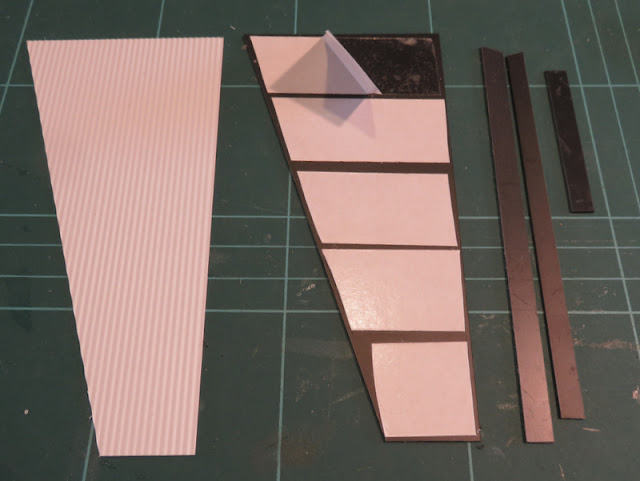 A new roof was also made, fortunately I had enough of the corrugated sheet left. This time I used double-sided sticky tape to fix it to the plasticard roof structure as seen here, I don't know if that will prove durable either but it shouldn't warp. The strips on the right were stuck underneath at 90 degrees to the roof surface to make a bend-resistant frame. 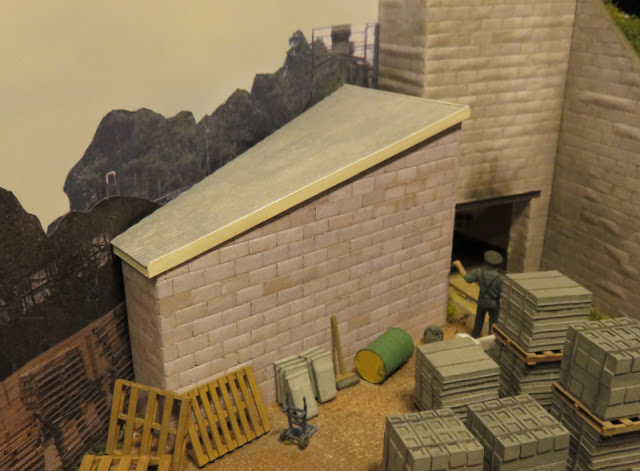 In place on the layout it fits the recess in the ground perfectly. The blockwork has printed a slightly different colour (the work printers have been changed!) but it looks OK. I'm pleased with the roof finish, which this time actually looks like asbestos. I sprayed it with grey car primer, and liberally sprinkled on some talcum powder, after it was dry (1/2 hour) this was rubbed with a toothbrush, then the process was repeated a couple more times to build up texture and colour variations. Finally a little pale grey-brown weathering powder was applied in a random way. 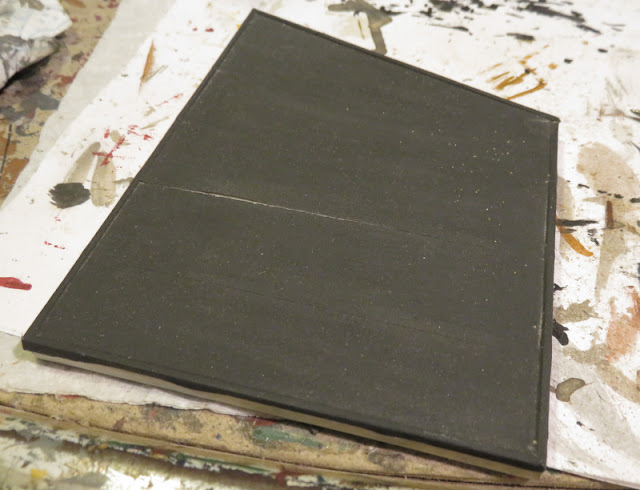 On the engine shed roof, part of the masking tape felt had lifted showing the white plastic underneath. This was simple to fix with another coat of dark grey paint, working into the crack, then while tacky pressing the masking tape back down. 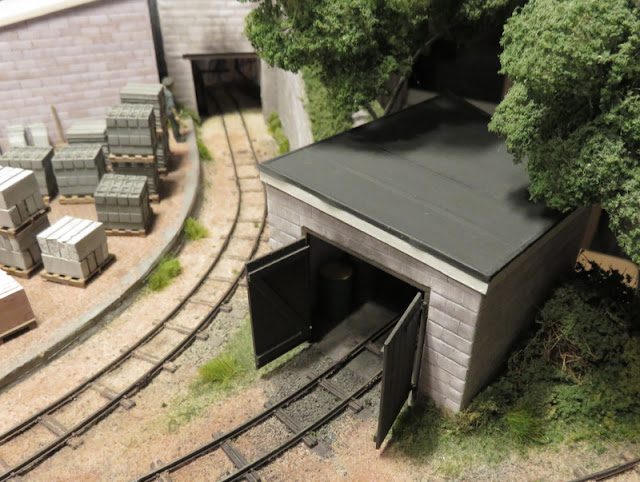 Then I noticed one of the points was not going all the way over, this was traced to the wire-in-tube under the baseboard flexing too much, and taking up the motion. Sticking a piece of foam-core board alongside the tube to hold it fixed that, with a small adjustment to the wire to ensure the point blades moved fully from side to side.

With that fixed I turned on the power - to find a dead short. So I spent over an hour trying to trace the cause, which is surprising for such a small layout. Eventually after much disconnecting of wires from terminal blocks under the board, and poking with a test meter, I traced the short to this point - the moving blade had shuffled along far enough to touch the fixed rail where circled below. As the blade is the same polarity as the adjacent stock rail, but the fixed rails around the frog are switched with the point movement, a short occurred when the point is set as shown. The fix for now was to push a Stanley knife blade into the gap forcing the blade away from the fixed rail - but I really should think of a way to stop it happening again. 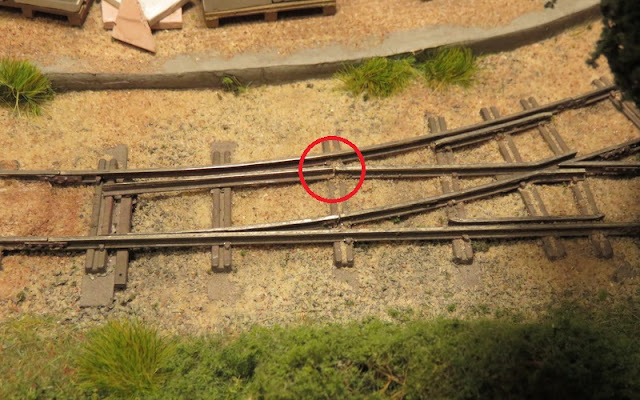 After all that a wire came loose from a switch - possibly due to the test-meter poking - but a dab from the soldering iron fixed that.

So finally I got to test the layout, and of course the stock. The photo below shows my entire O14 collection, although the Lister and O&K on the centre track tend to be kept in reserve. They are very low geared so slow and noisy, but in any case the two Hunslets are prototypical. The blue Hunslet needed a few droplets of oil on the worm gears to get it running smoothly, although it is never the smoothest of mechanisms and has a jerky start/stop. However once the rails had been given a new rub of graphite all the locos were found to be running fine. 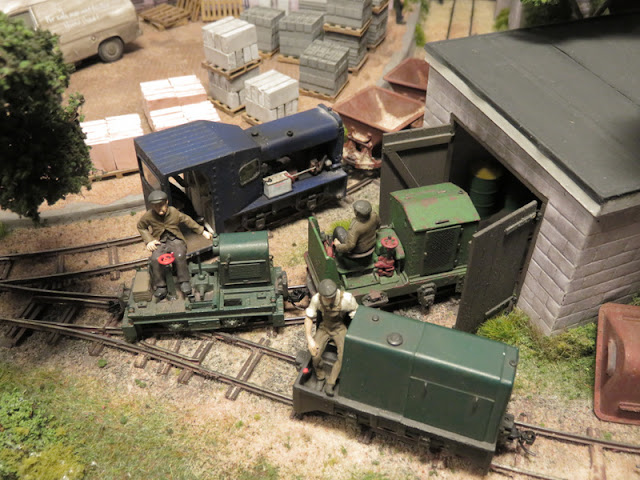 So after somewhat more effort than I had envisaged, Thakeham is now ready for exhibition.
Posted by Michael Campbell at 23:22