A day out in Brighton

I took my son over to Brighton for the Model-World show today. This isn't really a model railway show at all, it's an entertainment event, and a very commercial on in many ways. But then it uses the Brighton Centre - usually home to top music gigs, shows, and party conferences, and is popular enough to have people queuing round the corner to get in (tip - find the back entrance, just don't tell anyone!). The other thing that is different is the range of models on display - trains, boats, planes, cars, tanks, fairgrounds, doll's houses, sci-fi - you name it and someone has made a model and brought it for display. 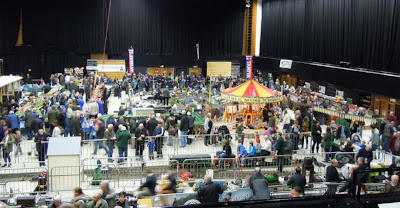 Not just models too, in this picture you can see two separate miniature railways giving rides, a mini Carousel (for little kids) from Hollycombe, on the left a coach from the nearby Volk's Electric Railway, and outside is a full size traction engine. Demonstrations too, such as this one of radio-control lorries and diggers, moving soil from one place to another. I know these are just big toys (who are we kidding, so are trains), but fascinating to watch, lights and sounds included. 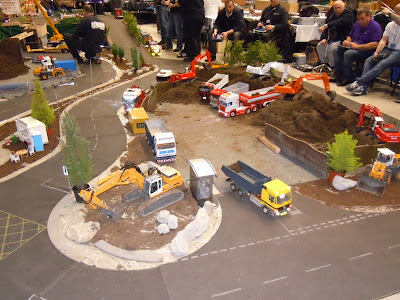 This is all great for children: my son had a go at sailing a radio control boat, colouring a picture of a lifeboat at the RNLI stand, racing a slot car (he won too, more by the "tortoise and hare" method than the Lewis Hamilton effect), and making an Airfix kit. Well actually I helped rather a lot with that last one! But it shows how "hands-on" this show is, and why it is so popular. From my perspective the selection of model railway layouts, while good, wouldn't justify the entrance price, but as a day of family entertainment it is great. 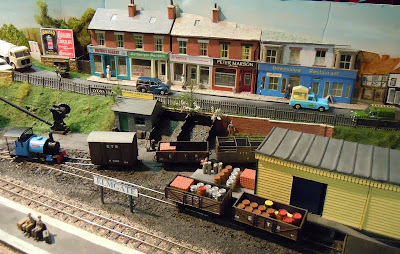 Talking of the model trains, my friend Tim Sanderson from the local 009 group was showing his "Elmgate" layout, a super little layout I've previously had the pleasure of operating, and good to see 009 represented. In fact it wasn't the only 009 layout there. Amongst the other layouts were two separate models of (or at least closely based on) Buxton, one in 00 and one in N, and showing why it is such a good prototype to pick. You can see more photos here, though I didn't manage to photo that much with an excited boy in tow. One model that I did really like though was this fine diorama of Dolgoch station on the Talyllyn, in a large scale and capturing the character, even without any running trains. 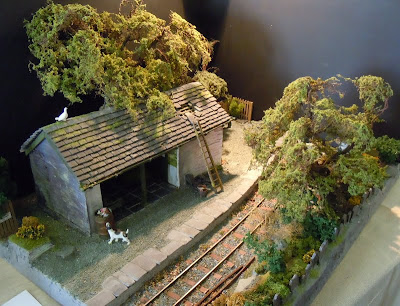 I said I was waiting for warmer weather to prime the recent projects ready for painting, but as the ghostly apparitions below show, I decided to press on anyway! Perhaps because of seeing that Chris Ford has started and finished his Skylark in the meantime... 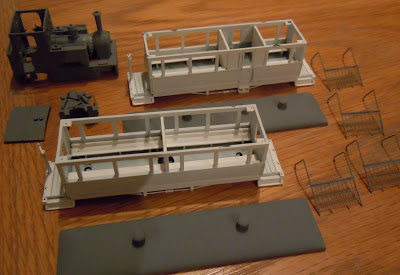 Preparation involved a scrub in warm water with a few drops of Cif cleaner using a toothbrush (I'm talking about the models here). Since it is still cold out, and spraying has to be done in the garage at the bottom of the garden, the technique was to keep me and the cans of paint indoors between coats, and the model too every couple of coats.

The brass balcony railings had a few light coats of etch primer, this is very thin so it was followed by the usual Halfords grey primer to get an even coat, which was also used for the roofs and the loco. The coach bodies though were treated to white primer. Priming is very useful as it shows up all the surface blemishes, I was pleased to find very few except a few stray blobs of glue on the Skylark. With them cleaned up and another quick spray I'm ready to start painting the top coats.

Following on from the announcement that PECO are releasing ready-to-run 009 wagons and coaches, the March edition of Railway Modeller carries the news that Heljan will launch a ready-to-run loco for the scale!

They have chosen the Manning Wardle 2-6-2 tanks of the Lynton and Barnstaple Railway, which is no surprise given that PECO are producing wagons and coaches for the same line. But it is a good choice, an elegant and popular loco that will sell well to collectors, and in different liveries (the later version may follow later too). It's a good size and design for many "freelance" 009 layouts, and I can see it, with the PECO stock, attracting many to 009. I can also see the outside-frame chassis being useful to some!

No price or availability date yet, but it is great news for 009, and I'm sure one will be on my Christmas list one day!
Posted by Michael Campbell at 23:24 1 comment: