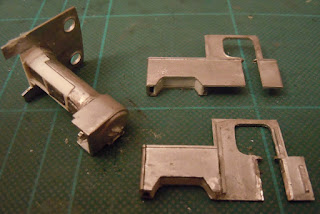 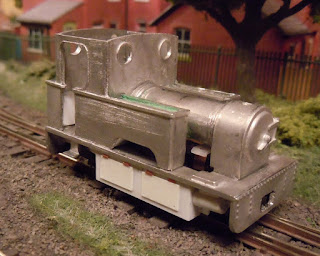 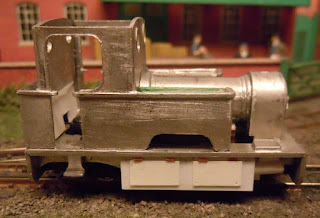 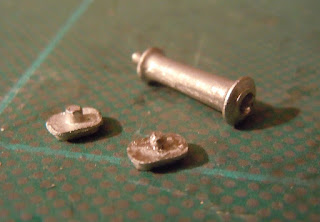 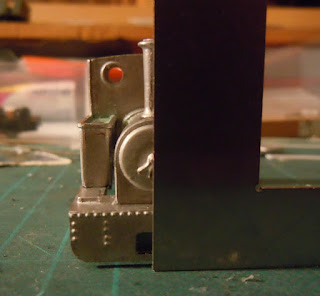 Posted by Michael Campbell at 13:29 3 comments:

Exciting news from the Warley show at the NEC today, PECO have launched a range of ready-to-run 009! They've chosen the Lynton & Barnstaple as the prototype, and a pair of wagons (a van and an open) will be available in the new year. Coaches will follow later in the year.

There has been much speculation about this on the forums recently after rumours leaked out, so it is great to see there was truth behind them! However I've been thinking for some time that RTR 009 was becoming more and more likely, these days production runs appear to be much more viable at lower volumes and a substantial collectors market has fuelled all sorts of rare prototypes being produced for the main scales. Warley also saw more RTR "O" gauge announced, with sub-£300 locos, this would have been unthinkable a few years ago.

While the majority of products are aimed at the steam-diesel British Rail era, I think there are an increasing number of modellers without nostalgic links to standard-gauge steam, and the range of subjects for model railway layouts is widening all the time. For many their experience of railways (especially steam ones) is based on preserved lines, books and other media, and that can just as easily mean narrow-gauge. I'm sure interest in NG has increased in recent years with plenty of NG models in the magazines and at exhibitions. 009 offers a lot to modellers: the detail and scenic scope of 00, but with compact trains and sharper curves allowing a decent layout in a small space (just look at mine!) - ideal for a home layout. It is also easy to add a narrow-gauge "feeder" or tourist attraction as an aside to a larger 00 layout, and for collectors (for whom running models is not important) 009 models can sit alongside 00 in the display cabinet!

You may be thinking - why the excitement, these are just wagons and coaches, but surely many are put off 009 by the need to kit-build locomotives? That is very true, although the Roco and Minitrains products could make a convincing preservation-era layout with these products. However I think we have a chicken-and-egg situation here, manufacturers will have been put off 009 for fear that a loco would not sell without suitable stock to pull. Now PECO are denying they are looking at making a loco, and to be fair making locos is something PECO rarely do, but there are still rumours of an RTR loco being a possibility. I'm more confident of that than ever, if the new releases sell well then surely manufacturers will look at 009 from the saturated 00 marketplace and think there is an opportunity!

Meanwhile, hats off to PECO for a brave move, and I wish them well. I'm sure there will be some wagons on my wish list next year, the coaches may be too long for Awngate - but they do look nice!
Posted by Michael Campbell at 00:03 No comments:

The Dave Brewer Challenge at EXPO NG this year was for a "Pizza" layout, that is one of no more than 2 ft (60cm) in any direction. These generally result in a simple circle of track (I don't recall if that was a stipulation), hence the "Pizza" label!

As you will have no doubt figured out already, I'm a big fan of these challenges, and like micro-layouts generally. However I'll admit that Pizza layouts don't generally hold a great appeal to me, they can be tricky to make realistic and can be rather predictable, I see their main purpose to serve their builder; as an exercise, experiment of new scale or technique, or a useful test track. That is not meant as a criticism of the genre, just that I find part of the appeal of micro layouts is the challenge of an interesting and workable track-plan fitted into a realistic setting, the Pizza has less scope for this.

This year though the challenge entries were of the usual high standard, and demonstrated some original ideas and superb skills.

The winner of the challenge was Southern Cross Sand & Cement, by Des Trollip. This 009 layout features a sand and cement plant (as the name suggests), and with a siding and a spur off-scene it could be described as a fully operational layout. However it is the detailed industrial buildings and plant, and well observed colouring, that makes the layout stand out. 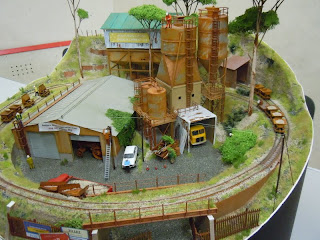 Train Set for Christmas by Daniel Figg caught my eye as being particularly original! It uses a dolls-house scale of 1:12 (I think) with "T" gauge - the Japanese produced 3mm gauge trains. I reckon that is around O gauge to scale? I believe this won a Junior Award. Inspired! 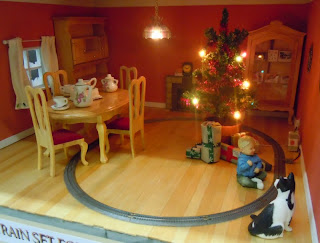 Chapel Mills is a well modelled and somewhat more typical pizza in 009 by Chris Seago. 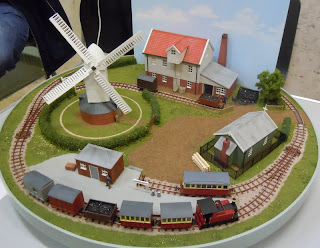 However my favourite, and a layout I have watched the development of on the NGRM-Online forum, is Four Seasons in O9 by Chris Dack. The name is taken from a type of pizza of course, but Chris has taken it literally - and modelled the same scene in each of the four seasons. I admire his dedication in this - I'd be bored by the second scene! He has really captured each season well - check out details such as the level of the river, and the size of the log pile, as well as the colouring and scenery. Chris has even mounted the circular layout on a motorised base - the viewer can press a big red button, which makes the entire layout rotate to the next scene. 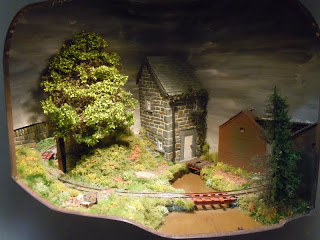 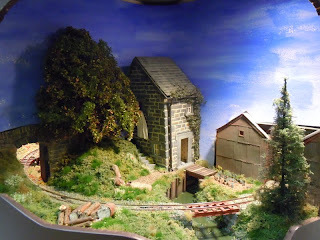 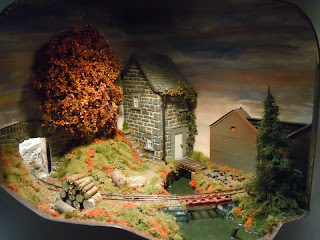 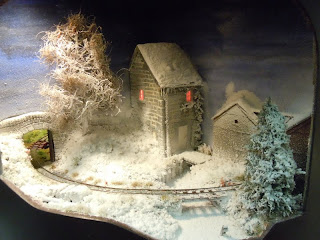 That's enough of a menu I think. Slow progress on the Skylark but hope to have an update soon.

Posted by Michael Campbell at 23:29 No comments: