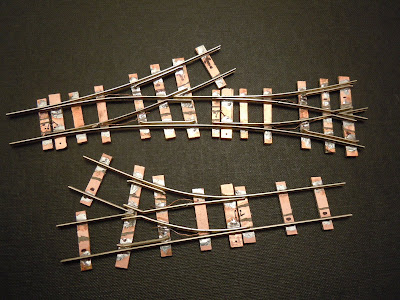 This is the result of my efforts over the last couple of weeks then - three hand-built points. Other than some cosmetic quarry track in 009 (that was never intended to work, or tested to see if it would), this is my first effort at building my own track. I used the Roy Link (KBScale) templates but since I was going to be hiding the track, and I didn't want to protrude pins or moving parts through the baseboard, I decided on the traditional approach of soldering to copper-clad sleepers.
As I have said before I am not worried what the track looks like - it will all be buried or in-set. So the sleepers were spaced for convenience rather than appearance! As I had it to hand I used code 80 (N or 009) rail rather than the code 82 KBScale recommend - as that has a slightly wider head and foot it would probably look better, and the track gauges were a little slack on the code 80. You may also be able to see some "cheats" I have used - the blades are pivoted in fish-plates in a manner similar to some PECO points, I have fitted bent-wire "springs" to the tie bar to hold it and the blades in place (they don't really give an over-centre effect). There are thin wire jumpers to ensure electrical continuity to the blades from the frog, which will have a switched feed.
It has been relatively painless, using a slitting disc in a mini-drill to shape the rails, and I also now have a tub of flux - the first time I have used it, and it does make soldering much easier! However I did take my time, and spent plenty of it "fettling" - grinding rail away, checking gauge, pushing my one wagon through ... so far all seems to work!

Posted by Michael Campbell at 23:08 5 comments:

Last weekend was the Bognor Regis Model Railway Club show, which was a good afternoon out with the lad. He especially enjoyed the kids "have-a-go" layout, and when we got home he wanted his train set out! Trade support was good with Squires and several suppliers selling more than just RTR boxes.

Fellow Sussex Downs 009 group member Tim Sanderson was there with his Elmsgate & Thatcham Light Railway, which is surprisingly busy to operate despite it's modest size - I should know, I have had the pleasure of operating it. Kolne USW (H0) by the Wealden Railway Group took my fancy as a small shunting layout (operated as a puzzle), with added passenger interest, and very nice Scenics. Unusually my son liked it too - he normally likes bigger and busier layouts! This scene is very nicely done - fun by the lake? Take a closer look and all is not what it seems! I didn't notice the sign at the time but Pharmaceuticals company Bayer are a big employer in Cologne. 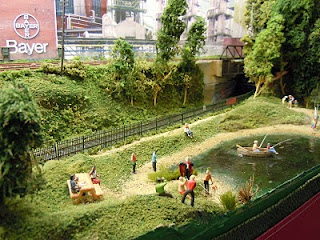 Nuenbruckenbahn (N, Iris & David Guscott) was an Alps scene with rabbit-warren track-plan, working cable cars, and interesting if implausible scenery. It may offend the purist but it was fun and very popular with the kids (mostly guessing which tunnel the train would appear from), and that in my book is a good thing! 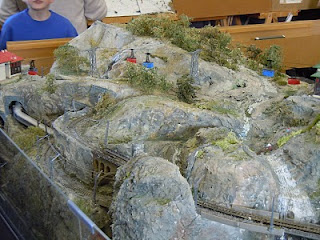 Gorringe Park Depot (00 - Denis Stevens) was a neatly modelled modern-image MPD, a bit of a cliché perhaps but with good reason. I thought the setting looked likely (unlike some of this genre), and this scene combined even more clichés ... I like someone with a sense of humour! 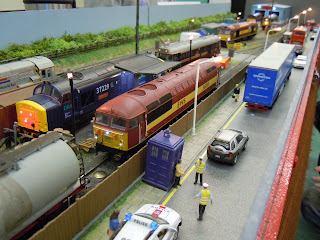 So when starting in a new scale/gauge, should I start with the exciting new loco kit, the pile of wagons, or the track? Hmmm... 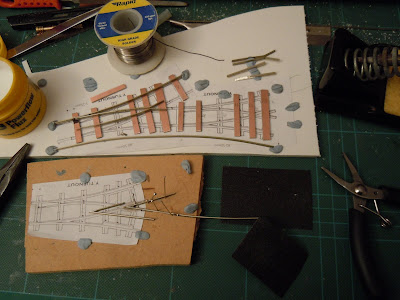 As you can see I started with track! This is only a small project so there was no point in setting up a test track, just crack on with the layout. However that meant starting with a point - or two! Now this is the first time I have made my own track, apart from some "scenic" 009 quarry track many years ago (including stub points), but as that was never wired for operation it doesn't really count!
For various reasons I am not using the KBScale approach for spiked track, but I am using the track templates, here are a pair of "Type 2" radius wye points under construction. The templates have been stuck to a piece of board, and copper-clad sleepers tacked on with a dab of PVA. Later the points will be removed and transferred to the layout. I have been shaping the rails with my mini-drill, and at the bottom of the photo the Vee rails are being soldered up, pinned to another template on a wooden board with dress-making pins.
What worries me most is getting the blades to pivot properly, and work well, while being robust. The KBScale method looks fiddly to set up at the tie-bar/blade end, and I can't put pivots or rods through the baseboard. I've been looking at PECO points with the fishplate pivots, and blades fixed to the tie-bar, and thinking ...

Posted by Michael Campbell at 23:19 3 comments: 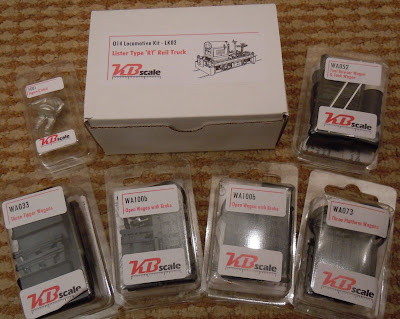 So here is what Santa brought me, courtesy of my Family and the useful ability to add items from other websites to Amazon wish-lists! Yes a nice pile of KB-Scale kits.
So I have a Lister loco, and 10 wagons - in total 3 skips, 3 flat wagons, 2 open wagons and a pair of fuel bowser wagons. That should keep me busy for a while, but first I need to make some track! Over the last month of so I've had a dose of the Flu, a Birthday Party for a 4-year-old, and of course Christmas and associated family commitments, to distract me from model-making. So I'm now hoping to find time to make some progress with my new project ...
Happy New Year to everyone!

Posted by Michael Campbell at 00:22 2 comments: