When I last posted about the Atkinson-Walker steam tractor I was pondering how to make the under-frame, which is not included in the Worsley Works "Scratch-aid" etch. I found some wagon under-frame mouldings in the bits box, I think from an W&L open wagon, and came up with a cunning plan.

I started by opening out a recess above the spring, which gave space to add a few extra leaves from micro-strip, a fiddly job but now they look like they could take the weight of a loco. The W-irons were cut away, and the axle-boxes rounded off slightly, as per an approximation of the drawing. The wagon frame was 1mm shorter than the wheelbase of the chassis so I cut and spliced in a piece of 40 thou, with a splice behind. The notches in the top are cut to clear lugs below the motor. In the photo below one frame is prepared, the other is just started on... 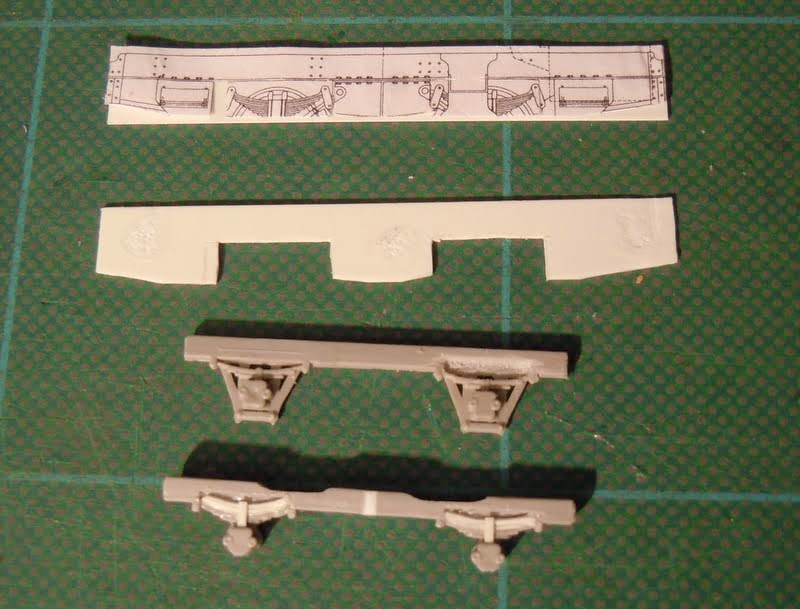 Then on to the outer frames. I'd remembered to take the book to work and photo-copy the drawing at 82%, bringing it to 4mm scale, which makes life easier. I did a few copies while I was at it, allowing me to cut out the frames and stick them to some 20 thou plasticard with a few drops of solvent. It is much easier than all that marking out, a few cuts and I had the basic shaped of the side-frames, there's a mark where the paper was stuck but I'll just stick that on the inside. 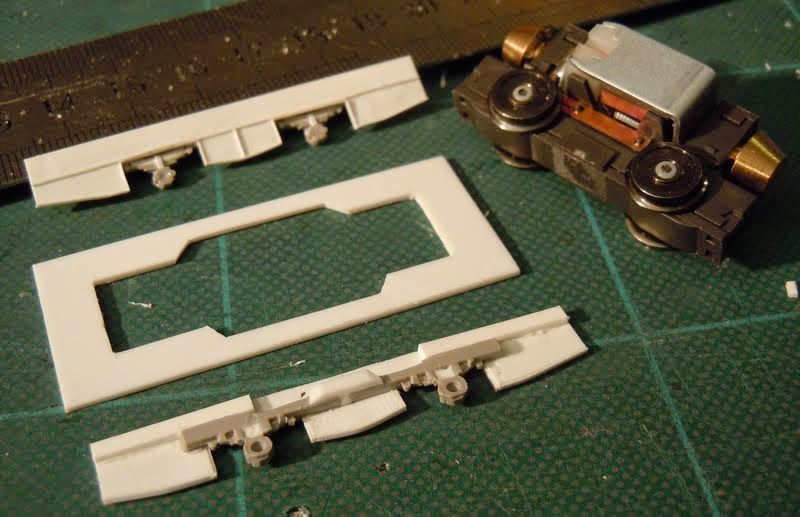 Micro-strip was added to the frames according to the drawings and pictures, and the wagon-frames with axle-boxes and springs positioned behind. A dummy lower foot-plate was also cut out, as seen above. The nearest side-frame shows the rear with the wagon sole-bar, this sits just below the motor with notches to clear the plastic motor support brackets on the chassis. The 20 thou frame sits against the side of the motor, which should give the right ride-height. It's now clear why it was useful to have the springs and axle-boxes from one piece of plastic - there is nothing to support them except from the frame above, strictly speaking there should be a gap above the springs too but the lack of that won't be visible!

Holes were then drilled through the plastic lower footplate and the brass footplate of the body for the bolts - I decided one at each end, off-set to allow for couplings to fit centrally. An M2 nut is soldered above the floor, by threading a Vaseline covered bolt with another nut from below and tightening. A little flux applied around the nut with some small pieces of solder, then apply the iron. In theory the Vaseline stops the bolt getting soldered too, and it did - but on the second one some solder got into the bolt thread between the nut and the brass sheet. I managed to unscrew the bolt though, and as it didn't need to be so long, just cut off the clogged end! 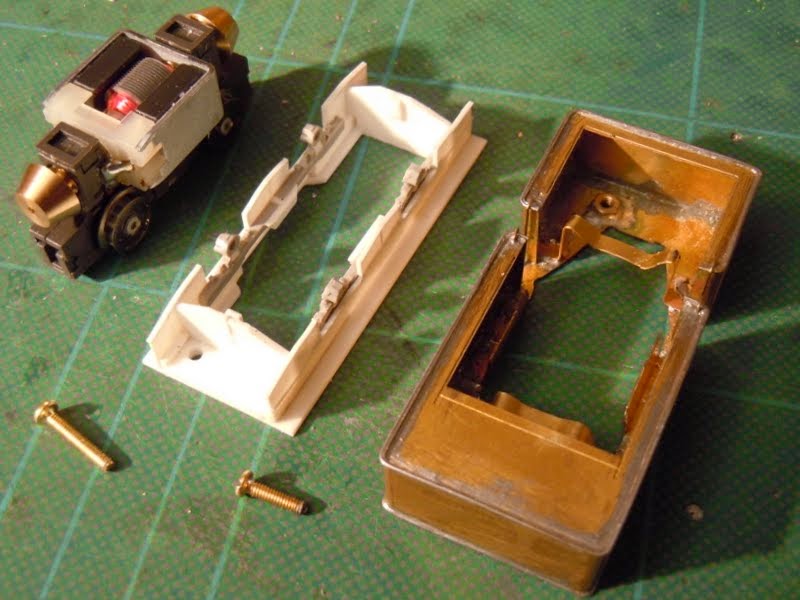 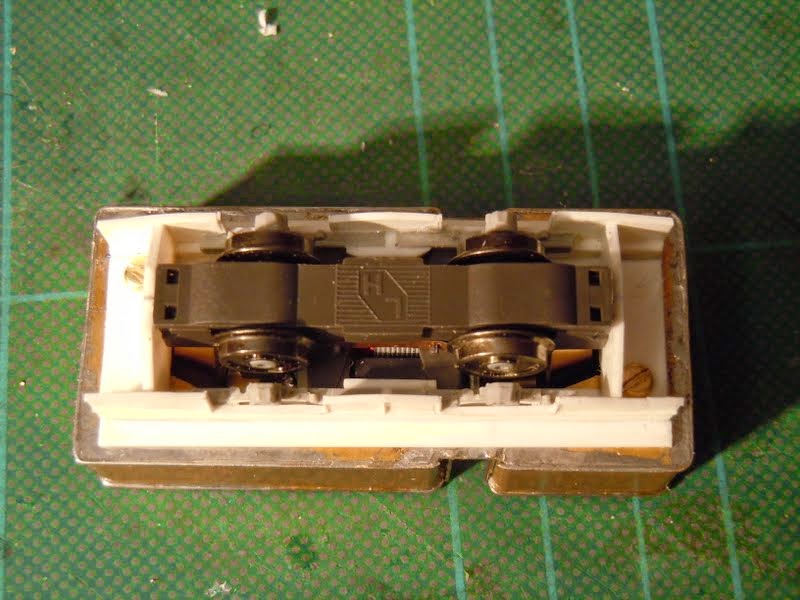 The frame/chassis assembly can then be bolted to the body from below as shown. A valance will need to be added below the body, which will disguise the edge of the plastic lower footplate. From above you can see I added some brass "M" shaped brackets from spare etch, which press on the top of the chassis. Actually the plastic lugs previously mentioned do the locating so these aren't really necessary, but may add some strength. Brass brackets also press against the motor sides to hold the chassis/body vertical. 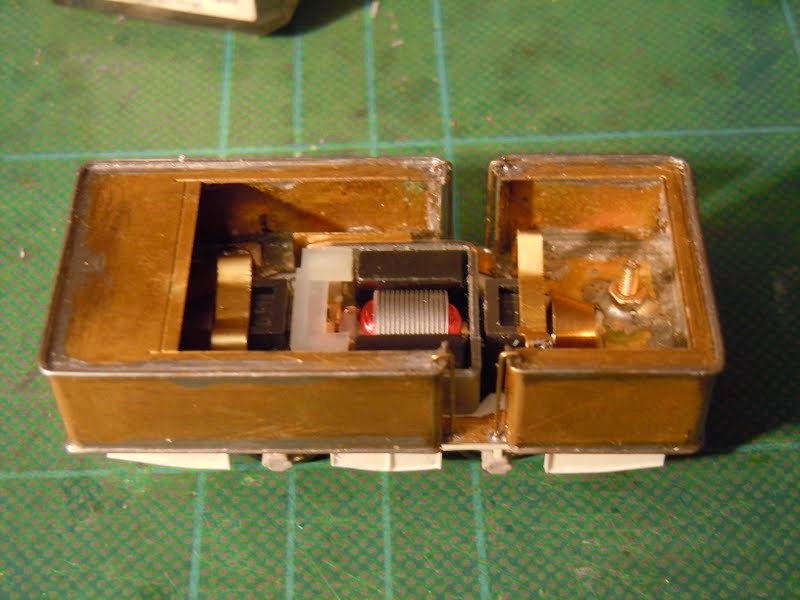 The frames look OK, axle-boxes line up (reasonably), and ride height matches the drawing, so all good to continue with the build! I've yet to add buffer beams and some details to the under-frames, as well as the valance mentioned, but now I can progress the body too. 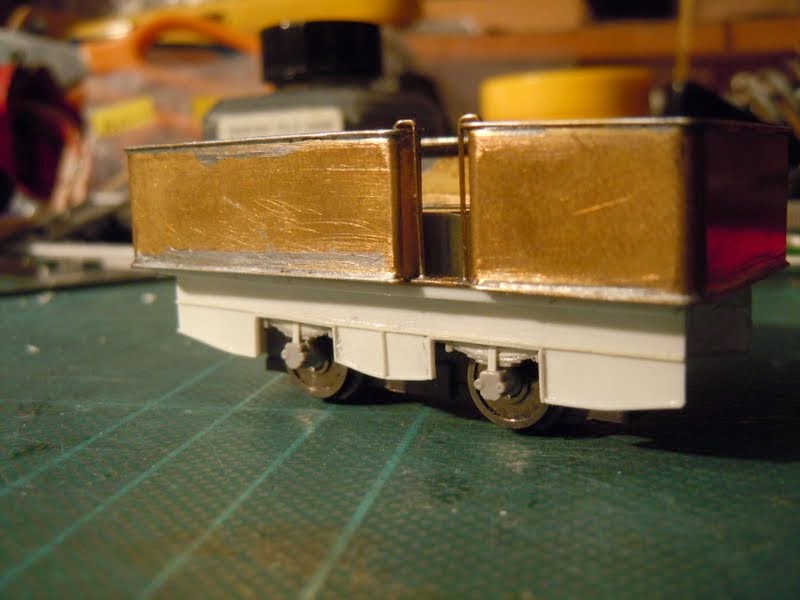 Posted by Michael Campbell at 13:58