This year's challenge at EXPO NG marked 30 years of Expo Narrow Gauge, 40 years of Meridian Models and 45 years of the Greenwich & District Narrow Gauge Railway Society. The rules stipulated the layout must be triangular with sides in the ratio 30:40:45, up to a maximum of 1.8x those numbers in cm. This makes for an unusual and challenging layout to design. You've seen enough of my entry so here are the other entries - there were 5 in total, which is less than most recent layout challenges and I think reflects the difficulty with the triangular constraints. 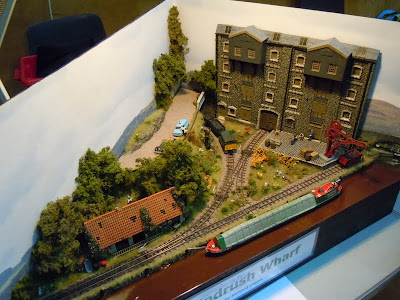 I'll start with the winning model, Windrush Wharf in 009 by Richard Holder, featuring a canal and warehouse, yet also providing a surprisingly rural and detailed scene. The track plan is the old-favourite inglenook, albeit well disguised, making for interesting shunting, while putting the backscene around the two shorter sides allows it to fill a corner. The over-bridge suggests more of the line is off-stage and allowing it to be added to a larger layout. 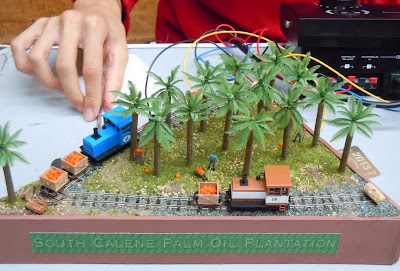 South Calene Palm Oil Plantation in HOe (I didn't get the builder's name) was much smaller model in an original setting, I do like the palm trees. Operation was more limited though, passing wagons between the two tracks via the working turntable (probably as tedious as Thakeham!). 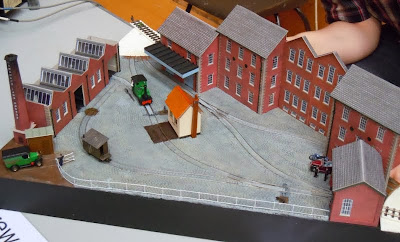 A Cut above the rest in 009 by David Bumstead is a fictional lawnmower factory. The track-plan is original and interesting, with sector plates in each corner. Good use has been made of Metcalf card kits and the track is inset into a cobbled yard made from DAS - as I did with Landswood Park. I think a little weathering and more details - particularly to give the railway a sense of purpose - would add a lot to this model, but  given the clever design and tidy construction you'd never guess it was built by a teenager! 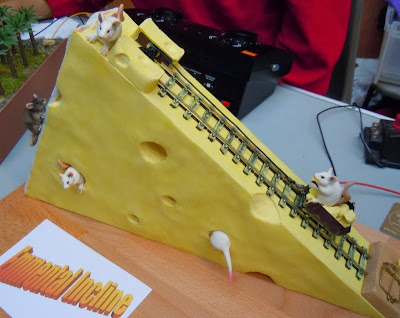 Finally this original interpretation attracted a lot of attention... Again I didn't get the builder's name, or the scale (I guess it is 1:1), and no it wasn't real cheese. But it is nice to have some humour at an exhibition, I bet it stumped the rivet counters!
Posted by Michael Campbell at 13:50