EXPO-NG proved to be an excellent show, as usual. I'll post some pictures of the layouts in due course, but first an update on how Thakeham performed!

Set-up didn't take too long, the simple stand and light made a big difference, finished with a name-board and simple information display. Operation was from the right-side so I grabbed the end of the table of challenge entries, and pulled up a chair! That left time for a quick look round and a visit to the 009 Society sales stand before the show opened... 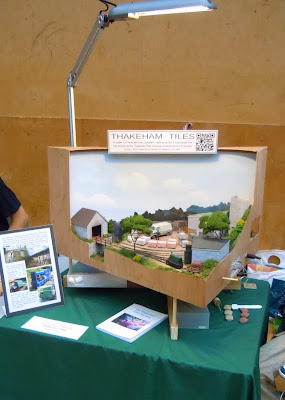 My 6-year-old boy was insistent that he wanted to come and help! I wasn't sure how helpful he'd be, but in fact he proved quite competent at operating - when he wasn't too excited! Here he is loading the wagons, a somewhat fiddly job. 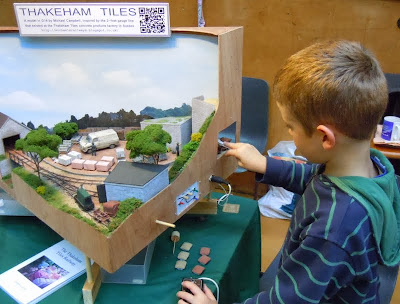 I was helped by the Sussex Downs group; Simon Wilson, Phil Savage, and Mark Holland all did turns at operating that gave me comfort (and sanity-restoring) breaks and so I managed to see a lot of the show in short stints, so thanks to all. Mind you they were only to quick to give the controller back when I returned! Here's Phil at the controls while viewers wonder where the sand loads went. 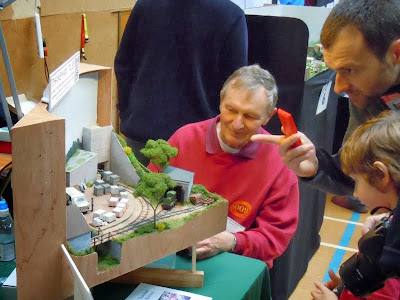 To my relief and surprise the layout performed very well. There were a few incidents of loads sticking in the wagons resulting in derailments when unloaded, traced to an oversize load, plus one occasion of the loads jamming in the chute (gravity failure). We learned that if the rod was not pulled right back hard the loads may not be pushed off the magnet. And the act of loading up quickly took practice! However the unloading generally worked smoothly and attracted interest. The Hudson performed smoothly all day, as did the Lister when given a run in the afternoon, but the O&K had an occasional sticky moment in one direction which I shall have to investigate. 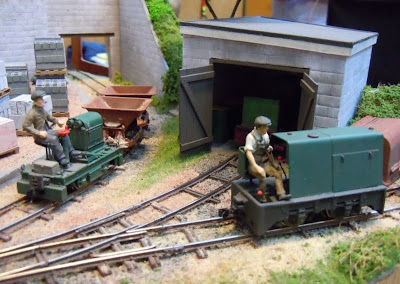 I may not have won the challenge this year but I am still very pleased with the layout: it's my first ever (almost) prototype model, it looks good and works well. It attracted lots of nice comments which is very encouraging, so thanks if you were one of those that made them! There were even some potential show invites so there may yet be more to come from this little triangle.
Posted by Michael Campbell at 23:09

I hope there are more show invites - I really want to see this layout!

It was great to see Michael. You did an excellent job and definitely made me consider that scale too.