I decided the mounts that came with the chassis could be used, I selected those intended for the Billard as being the most suitable. Soldering them on was a little tricky, this would be easier before fitting the running gear to the chassis. The motor end bracket needed trimming to clear the rubber band drive. 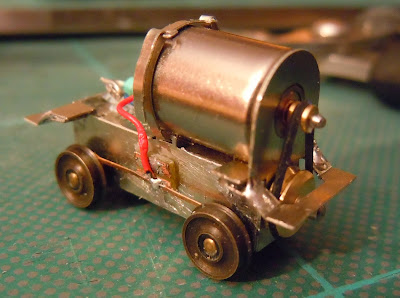 The tram body etch is typical of Worsley Works, neat but basic and without instructions! I still find getting four sides square and aligned and soldered together a big challenge, but after an evening of fiddling I've got it as good as I am going to. Hopefully any remaining gaps can be filled and any misalignment put down to "character". 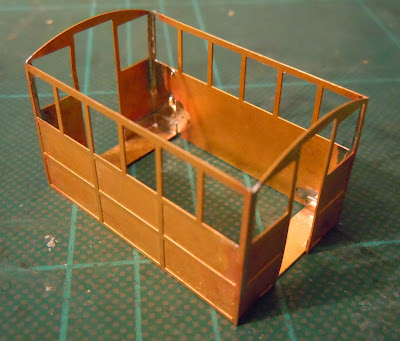 As yet I haven't fitted the roof, I need to find a suitable chimney first, and it might be better to leave fitting it until after sorting out the floor and interior. The etch includes multiple pieces to make up the distinctive U-shape buffer-beams of the Wantage Tramway prototype, however:
1) I can't make out how they are supposed to go together, and
2) being rather wide to suit the standard gauge prototype's buffers, I don't think they will suit a narrow gauge loco.
I think I will make up buffer-beams and side skirts from plasticard, the Wantage loco spent most of its life without side skirts but I will need them to hide the small wheels. 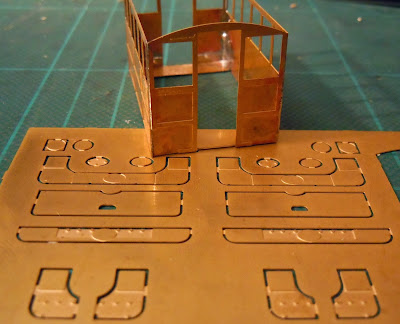 If you didn't know this was supposed to be a standard gauge loco you would never guess, it is tiny! At 27mm wide it is admittedly slightly wider than most 009 stock, but well within the variations of narrow gauge and as seen here, it looks at home with my Parkside "GVT style" coaches. I've bent the chassis mounts so the height looks about right, though I have yet to find a way to attach the chassis to the body. 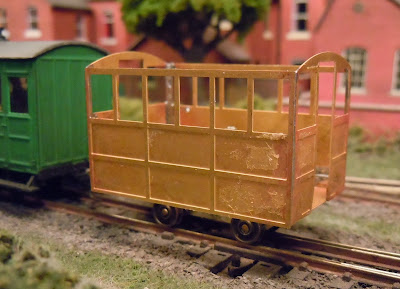 So far a promising start, though it might be a while before it progresses much further, due to the impending house move!