The challenge layout board arrangement has a sector plate, which I have put on the left-hand board with space in front, which has a "visible" track and will be scenic, so the sector plate will be hidden. The layout will be front operated, and while I don't expect to need to handle stock in the fiddle yard, it will need to be moved between tracks from the front of the layout and without good visibility!

So here's the overview. On the front of the layout is a printout of the proposed control panel, it's tight but I think it will fit here (I'd rather not the complexity of a separate panel). The dowel protruding from the front panel is used to move the sector plate. You can see where I have shortened the sector plate, and how the two tracks are fitted at slightly odd angles. The pivot bolt at the left hand end was included in the baseboard module kit. 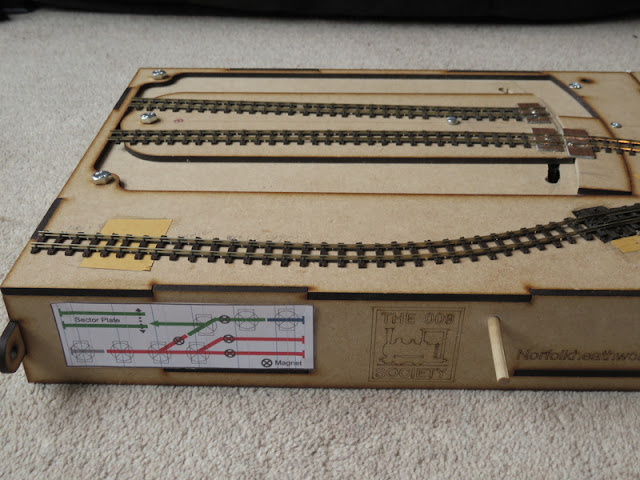 Looking closely at the moving end of the sector plate the incoming track is secured to a piece of PCB which overlaps the edge of the sector plate to ensure it does not lift. The two tracks on the sector plate are also soldered to PCB pieces, which have a hole drilled between the rails, right down through the MDF below. A length of brass tube is hammered into this (slightly under-size) hole protruding around 10mm below - through the curved slot, and is soldered to the PCB above - you can see the copper is gapped to one side of the tube so it is electrically connected to one of the rails. 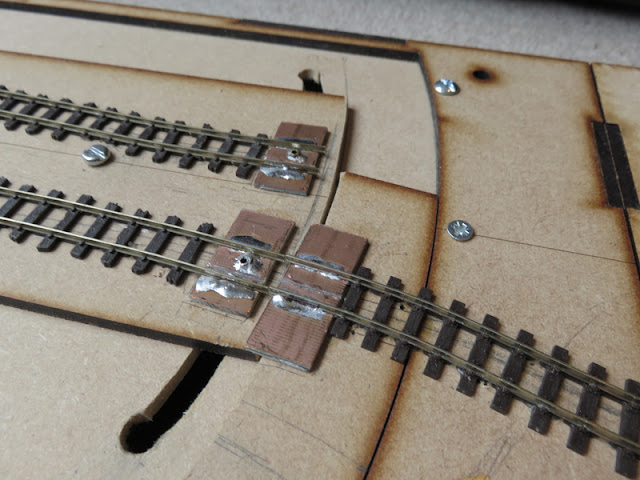 From underneath the two tubes or locating pins can be seen protruding through the curved slot. The latching mechanism consists of a sprung pivoted arm with a ramped edge and a notch facing the pins. In this case I made the arm from a length of aluminium - T section because that's what I had to hand - with a hole at one end for the pivot bolt. I'll attach a feed wire to this bolt when I wire up the layout so that it provides power to the selected track. The other end was shaped with files and emery until it slides back and forth easily against the pins as they move sideways, and a vee-shaped notch cut for the pins to locate in. This is deep enough for a secure latch, but with sides sloped enough for them to slide out when the sector plate is moved. 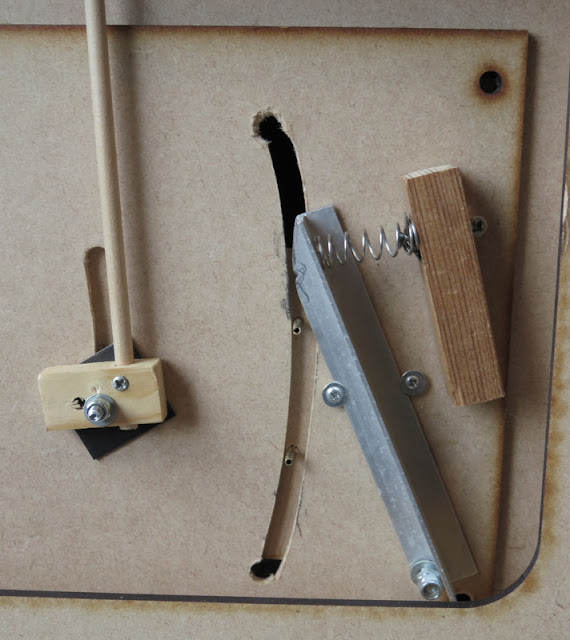 The spring came from a pump-action soap dispenser and is attached to a wooden arm, which is screwed to the board at the far end (from above) and held by a screw behind it - moving that screw allows spring tension to be adjusted. Crude but it works. I also used a couple of short screws with very wide heads to hold the T-section aluminium arm, and also act as limit stops to it's movement.

To the left a second curved slot is for a small bolt through the sector plate, which is attached under the board to a block of wood (via a plasticard "washer"), and hence to the dowel which passes through the front of the layout. Pushing and pulling the dowel thus moves the sector plate back and forth. 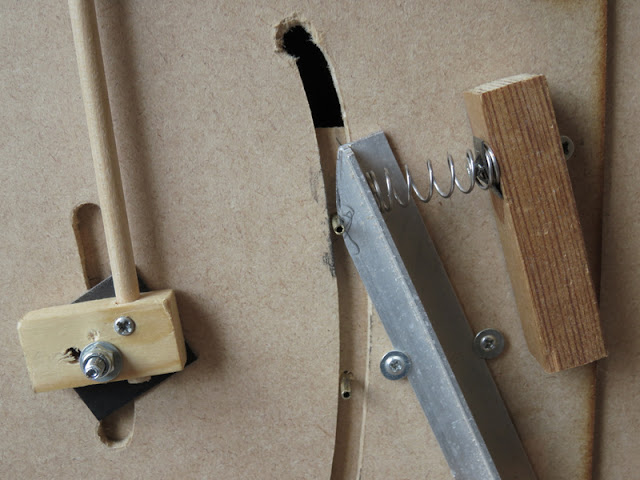 Back up top with the sector plate pushed to the back both curved slots can be seen, under the one on the right the aluminium latch is visible with the ramps and vee-shaped notch for the brass locating pins. The bolt forming the latch pivot is at the top right, the screw on the right secures the wooden arm holding the spring. So this mechanism is simply constructed using basic components, which I happened to have in stock, but works well. The dowel allows the sector plate to be moved from the front of the layout, and the latch locates each track reliably, while providing electrical connection to only the selected track without the need for switches or a second mechanism. This design would work with more than two tracks, although that's all I have space for here.
Posted by Michael Campbell at 23:33