I've finally got around to cutting the holes in the baseboard tops, so could actually assemble the baseboards. These are laser-cut MDF kits supplied by Norfolk Heath Works, as a set especially for the challenge. There are no instructions so I was a little unsure of the best order to assemble the parts, but after a dry run it was fairly straightforward, so I applied PVA to the mating edges and re-assembled. 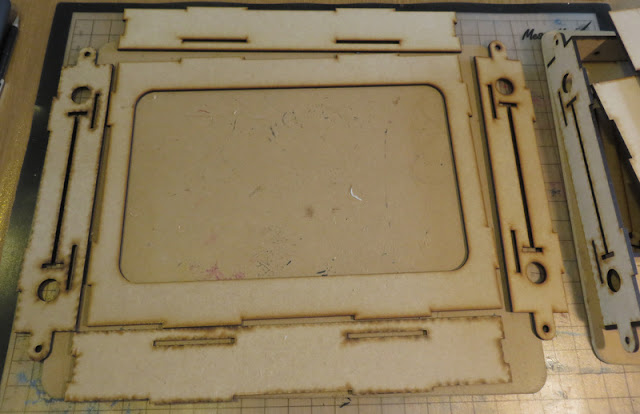 I chose the board with the dropped front, which gives potential for a wharf or harbour. You can see the holes drilled for point operation, and the rectangular hole for an under-track magnet. 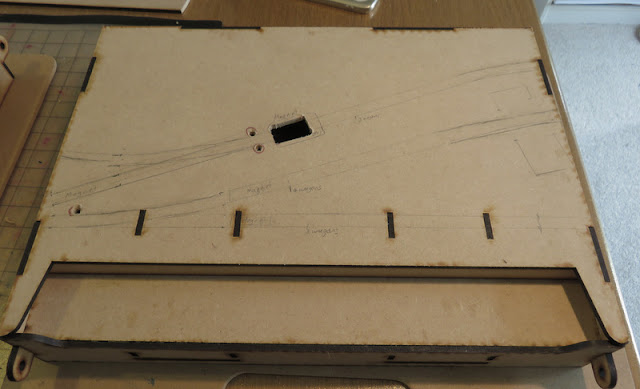 The other board has the sector-plate fiddle yard, and a number of laser-cut holes - some of which have no obvious purpose! The lower deck to support the sector plate is held by four bolts, but I've glued it in place so the bolts (which may get in the way) can be dispensed with. I've drilled another hole for point control, and a couple of curved slots under the sector plate - I'll cover this in another post. 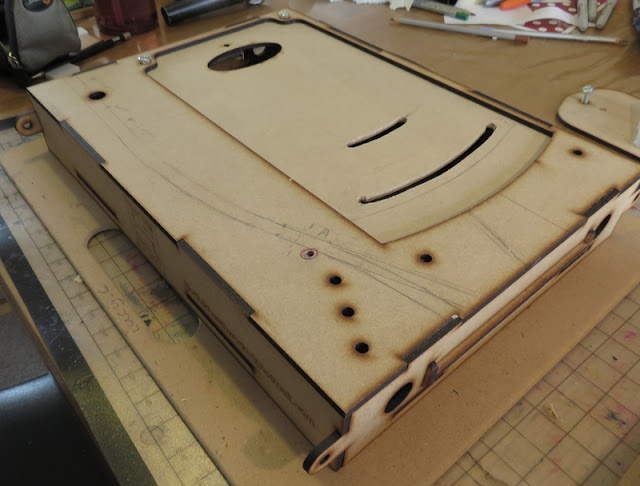 I also cut down the sector plate, shortening it by an inch. This was necessary to fit the track arrangement. Before laying the track I stuck brown paper over all the holes, and under the points and where magnets will be installed I used a black Pro-Marker to ensure bare baseboard wouldn't show where ballast can't be applied. 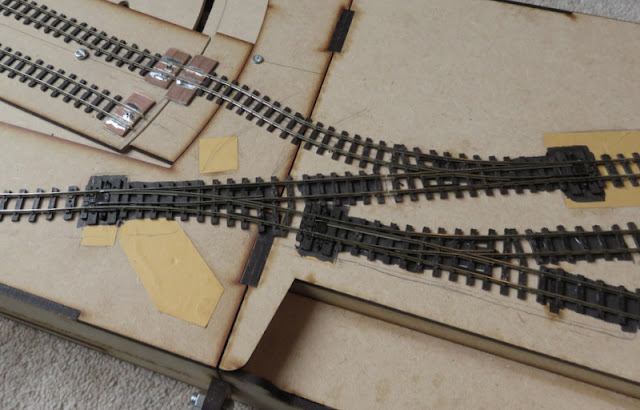 Track-laying started with the three points and the short straight between them, as getting this arrangement in the correct place was critical. There are insulating rail joiners between the two right-hand points.  Next was the reverse-curve into the fiddle yard, this was really tricky and the radius here is under 12", probably about 10", but I'm hoping that with smooth transitions it will run smoothly. This layout is only intended for small locos and 4-wheel wagons after all. Then the other tracks were added, using a 12" tracksetta for the curve, and finally insulating gaps cut with a saw disk in a mini-drill for isolating sections.

The track is stuck down with PVA glue, held with track pins (the chunky ones from Gaugemaster, that can be hammered without wilting!) although these are positioned between sleepers and next to the rail to hold any curvature - not through the sleepers - and are removed after the glue has set. The track is weighted with anything heavy while the glue dries, tins from the larder are useful!

The Peco 009 track for this little layout all came from my own hoard, the points were recovered from a previous layout but had never been ballasted and showed no signs of glue residue. After a clean in some warm water and Cif, and a polish of the rail head with a fibre-glass cleaner, they looked in good shape. The track is a mixture of left-over bits, including both crazy-track and the "mainline" type, although only the tracks on the sector plate had been used before.
Posted by Michael Campbell at 23:45