After considering the various options I settled on point motors for the challenge layout (really must come up with a name!), partially as I happened to have 3 SEEP motors recovered from a previous project. It's important that these point motors are fitted centrally to the point for the in-built switch (used for frog polarity switching) to operate correctly. I do this by packing the point blades with pieces of plasticard so the tie-bar is central, and using another piece of plasticard cut to fit between the motor coils with a hole in the centre for the operating rod, this ensures both point and motor are in the central position. 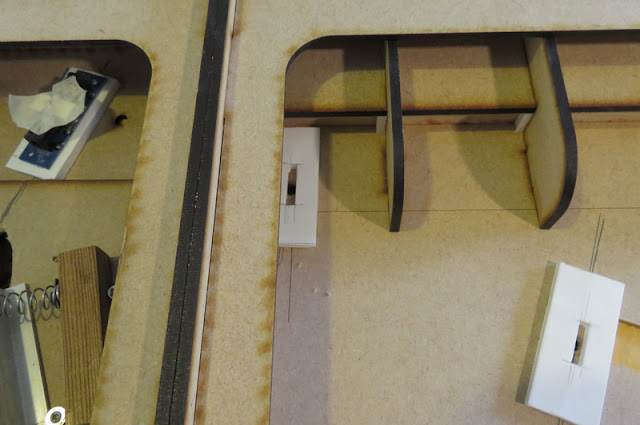 The motors I used had already had the operating rod trimmed, but were too long for this thin MDF. I didn't want to trim them further - partly as the metal is very hard, partly because a longer operating rod allows the motor armature to travel slightly further than the tie bar, which makes the switch operation more reliable. However I found a piece of 5mm foamcore spaced the motor just enough for the operating rod to be a perfect fit. The pencil lines are in line with the point tie bar, and allow the motors to be positioned in line with them. The motors are then fixed with contact adhesive, no screws seem to be necessary, checking the operating rod goes through the hole in the tie bar, the contacts are on the most accessible side of the motor, and before the glue dries fully, that moving the motor moves the tie bar and the motor switch moves from one contact to the other. 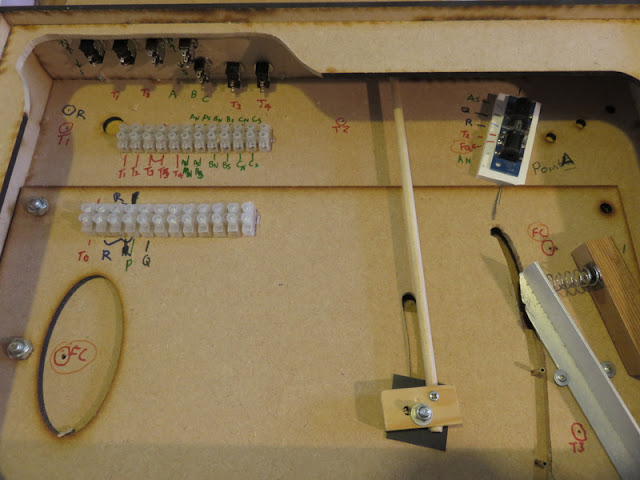 The wiring arrangement was worked out on paper first in my usual way - assigning a code to each section, point motor, and so on, so each wire has a code. The front panel was drilled and the switches installed (I'll detail the panel later), holes drilled next to the rails where feeds were required, and a couple of terminal blocks stuck in place under the baseboard with hot glue. I then labelled every feed wire hole, switch, and terminal with the code for the wire connecting there, in this case I even colour-coded the labels to match the wires (using the kids' felt-tips!) 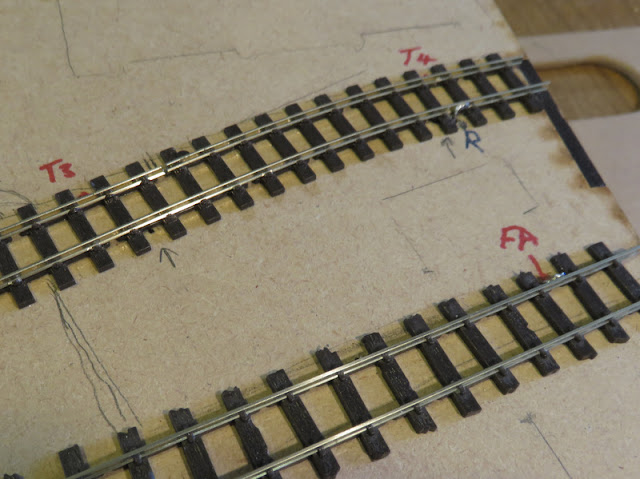 Feed wires are passed up through the holes and soldered directly into the web of the rail. This isn't as scary as it first seems: Underneath it is simply a case of connecting all the terminals, feeds, and switches, with appropriately coloured wire according to the codes. Wire doesn't have to be colour coded but it does help with de-bugging, I've used 5 colours here. The writing on the bottom of the baseboard is to remind me in the future what each colour is for, and what the codes mean! 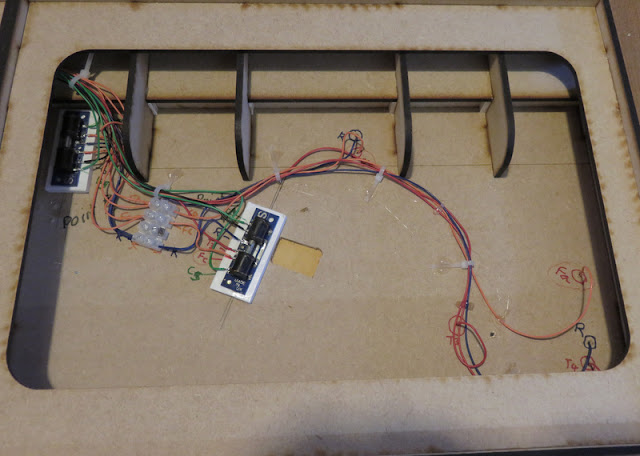 The second board is more simple, with wires passing through the holes provided in the laser-cut MDF. I've glued the two boards together so no need for connectors. To tidy and secure the wires cable ties were used, and blobs of hot-glue hold them to the board.
Posted by Michael Campbell at 15:48