Buckeye couplings for the Bachmann Baldwin

I recently picked up a Bachmann WD Baldwin which should be a useful loco, but I need to fit couplings to match the Microtrains "buckeye" type I use on most of my 009 fleet. Unfortunately Microtrains don't make a version to fit the NEM coupler pockets fitted to this loco. I had hoped to remove the couplings and fit standard Microtrains into the recess, but I found the recess was about 1 mm too narrow for the Microtrains draft box, and the shaft in the centre too large to pass through the coupling. As this part of the loco is cast metal and close to the chassis I couldn't see how to open it up without risking damage.

I did some searching. Dapol "Easi-shunt" buckeye couplings fit NEM sockets, however they are quite pricey, and from what I have read online they are not compatible with Microtrains. Bachmann make their own "EZ-mate" N-gauge buckeye coupling for the US market, and although there is no NEM version, from pictures it looked like the mounting was very similar to that used for the NEM bracket in the Baldwin loco. As they were reasonably priced I ordered some to try (type 78503). 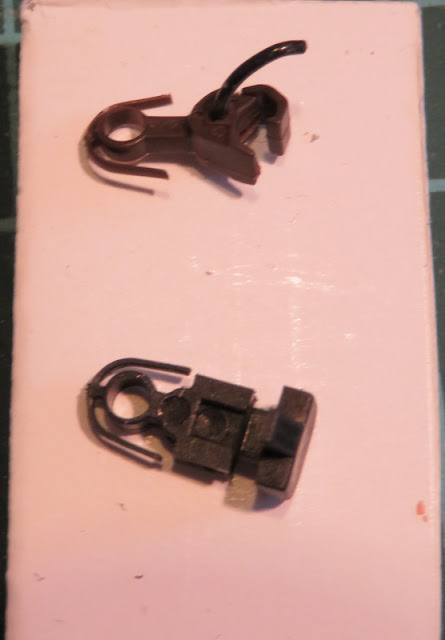 Comparing the "EZ-Mate" buckeye above to the coupling removed from the Baldwin the pivot with "whisker" springs appears very similar. So on to fitting to the loco... 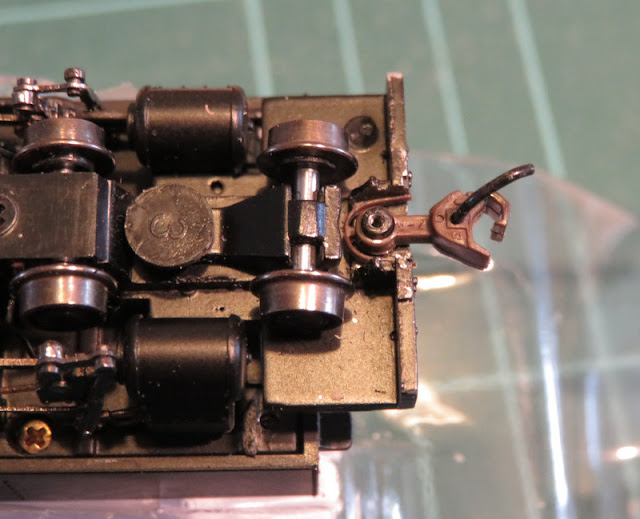 The guard-rail is removed from the front and rear with the tiny screw, which also frees the coupling. One of the guard rails appeared to have stuck in place (paint?), a little work with a knife and gentle leverage freed it. The EZ-mate coupling then just replaces the coupling and the guard rail and screw replaced. 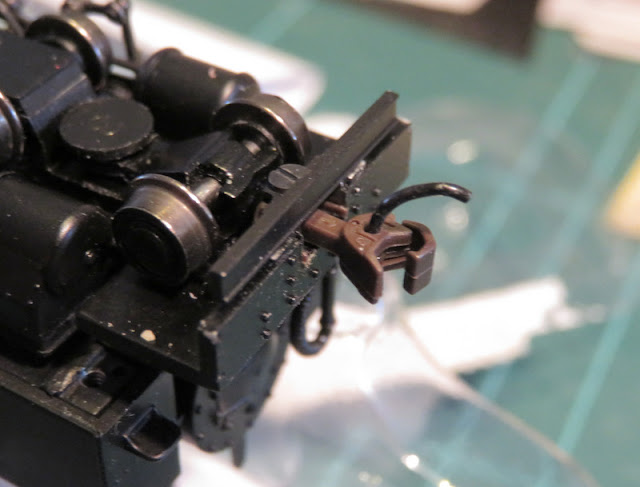 However, the trip pin fouls the track, and the coupling droops - it is too free to move vertically. 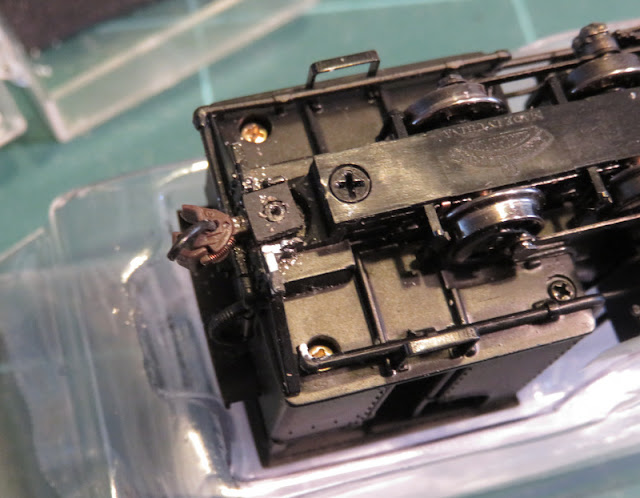 So to restrict vertical movement a piece of plasticard was cut to fit the coupling recess with a 2 mm hole to clear the pivot shaft, and acts as a spacer or washer to support the coupling. The photo shows the rear coupling, and you can see graphite powder (Kadee lubricant) to help free movement. Once assembled the height of the trip pin was checked - is should just clear a piece of 10-thou plastic placed on the track. It was still a little low so the trip pin was pushed up through the coupling by about 1 mm. 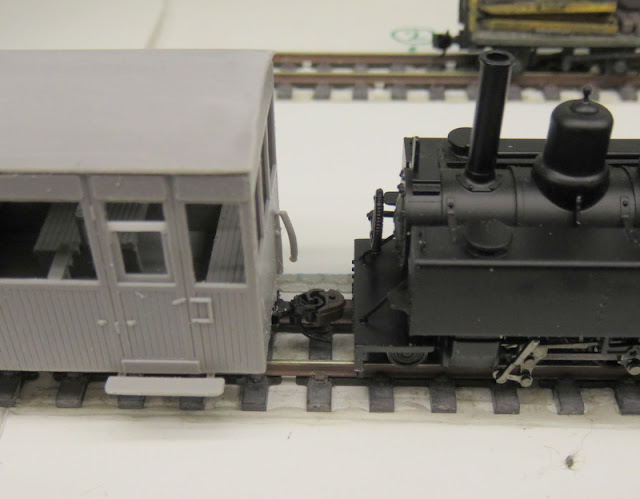 As you can see the result is couplings that match the height I set the Microtrains at (which I think is about 1 mm lower than they should be for US N-gauge), and despite a slightly different design, couples up with them and look similar. Coupling seems quite reliable, uncoupling is a little less so as the Bachmann coupling seems more reluctant to swing over a magnet than the Microtrains. I've tried to ensure they are free to swing, and if the spring is any more slack they wouldn't centre, so I'm not sure why. However testing suggests they work reasonably well. The delayed action is rather hit and miss as even if they uncouple, the Bachmann EZ-mate often doesn't swing far enough to not re-couple.

So maybe this won't work for reliable delayed action shunting, but the conversion to couplings that are compatible with the Microtrains was relatively easy and didn't involve any non-reversible changes to the loco. Assuming other Bachmann 009 stock uses the same coupling mounting, I should be able to use the same EZ-mate couplings for easy conversion of those too.