In my previous post I'd described how I'd taken the back-scene photos and created a panorama.

I'd come across https://www.art-printers.com/ through members of the NGRM forum, who do custom back-scenes as well as a range of standard ones, so I contacted them with my big picture and carefully measured dimensions. John at Art Printers was most helpful, discussing the best way to crop/stretch the panorama to fit the layout and other edits (he could have created the panorama too if I hadn't already). We ended up with a little cropped from the ends, and a slight vertical stretch to the final image. When I was happy the back-scene was printed and dispatched immediately. I chose the premium option which is more hard-wearing, and I thought the price was very reasonable and the service excellent. 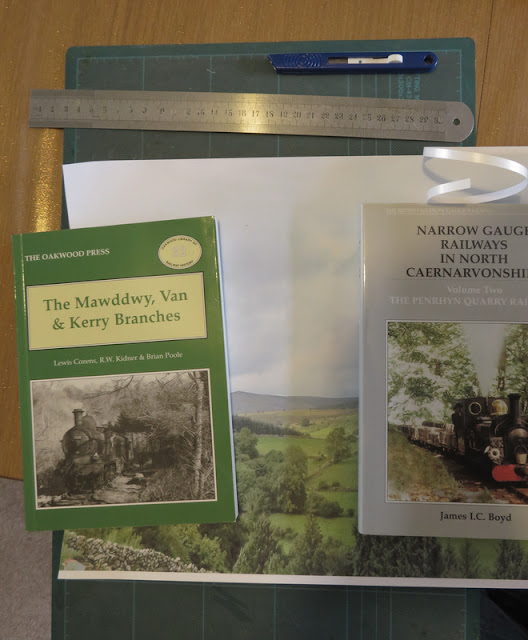 The back-scene was printed to the dimensions I requested, but with a small margin, which I trimmed easily with a scalpel, using books to keep the rolled paper flat while I did so. Because my scene went over one roll of paper I needed a join, which I had arranged to be towards the right-hand end where I expect to use more trees. It did give me an off-cut of blank back-scene paper for a trial run, so I found an off-cut of board in the garage, took it outside, sprayed the glue on, and stuck the blank paper on. I know that sounds weird, but it prepared me for how the real thing would go! 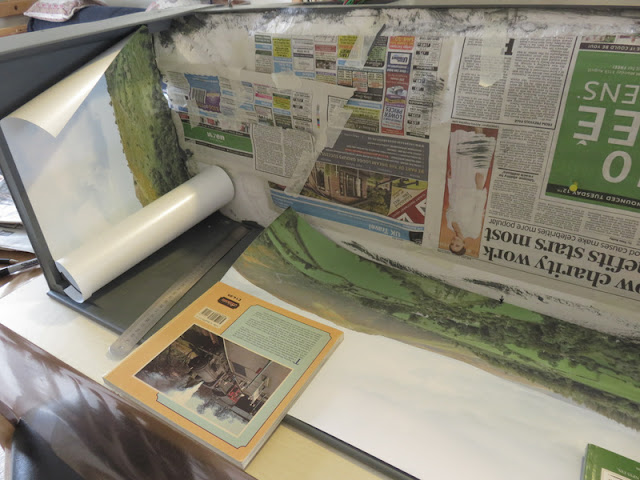 The next step was to dry-run the back-scene, and check it fitted. I needed to trim where it fits under the bracing at the ends, and figure out exactly where the two pieces joined. I marked the join with a pencil line. The next thing to think about was how to stick it on straight and in the right place... the dummy run had showed that the glue was strong, and although the paper could be pulled away gently if not firmly stuck, there wasn't much hope if it had been pushed firmly down. 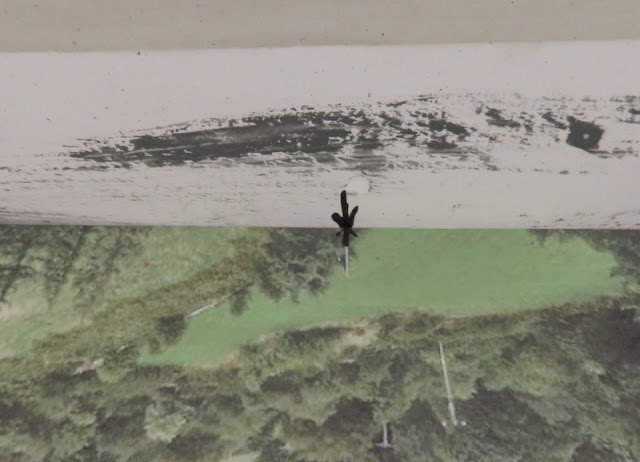 I decided to hold the back-scene like a scroll, holding against the baseboard so it is level over the back-scene (layout on it's back) , line it up to a mark, and press down. So I put a clear mark in a place that would later be hidden, about a foot from the end. 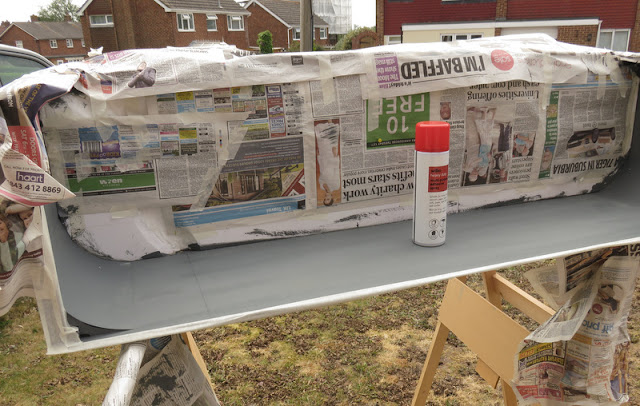 The dummy run had also showed that the spray glue got everywhere, so the rest of the layout not already masked up from painting was masked up, including the top edge of the back-scene board, and the layout set outside on it's back on the trestles - also masked as best I could. Then a last check the board is clear of lumps and debris! The glue is simply Wilkinson's own brand as that's all they had. It was sprayed liberally over the back-scene board, including up the end boards right up to where they meet the "wings" at the ends. The glue instructions say to cover both surfaces, but that would't be practical so I just sprayed the wood, and to wait 5 minutes before sticking together - but I had a lot to stick, so gave it just a couple of minutes before starting with the longer back-scene. 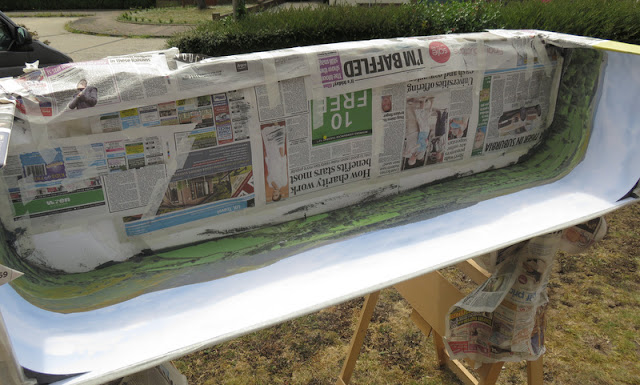 And a few minutes later the job is done. Despite my best efforts the longer scene is very slightly skew, and has risen about 3 mm by the far end, but it fits and looks fine, the gap at the bottom will be hidden by scenery. Wit hindsight a second pair of hands might be helpful here, to ensure it is held in line with the baseboard and pushed down at the same time. The shorter piece was butted up to the first piece and fortunately the join is quite neat. Best of all the premium paper has gone on smoothly, without wrinkles or bubbles or tears, and is stuck firmly - even in those curved corners. Overall I'm very happy with how that went!
Posted by Michael Campbell at 21:55