I came across the Petite Properties stand at Alexandra Palace, and was impressed with their products. Actually I'd heard of them and seen the website already, although I've not seen many built up on layouts, but looking at the range on their stand I was struck with their potential. Petite Properties come from the dolls-house hobby but have found a ready marked in model railways for their laser-cut building kits, with a range of non-railway buildings (houses, shops, etc.) and including the popular low-relief format. Anyway, although I didn't have an immediate need for one, I picked up "No 12 Station Road", a small shop in low relief, to see what it was like. 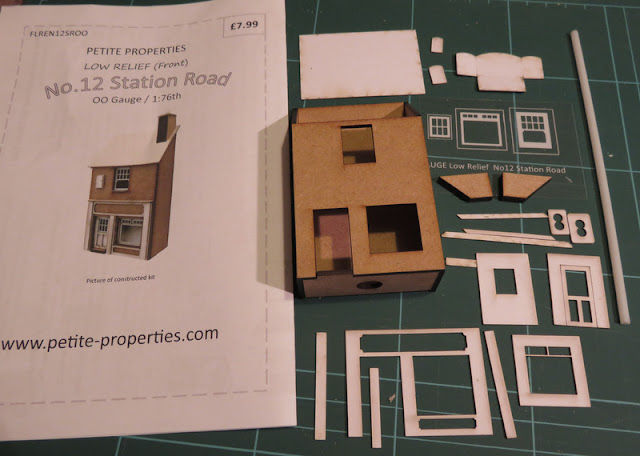 Here's the contents. I've already assembled the main walls which are cut from 2mm MDF - the sides, front, and floor. The fit is so precise no cleaning up was required, and the back panel is a tight fit. There's also the chimney pieces, and the rest of the kit is laser-cut card for the roof, window frames, lintel, and other details like the shop-front, the printed clear plastic windows, and a length of tube to make chimney pots. The instructions are clear and comprehensive, although I didn't follow the order of assembly prescribed, thinking instead about the covering of the walls and painting. Wall and roof finishes are not included in these kits, allowing you to finish them as you like, I suppose that means they are a sort of partial or scratch-aid kit? 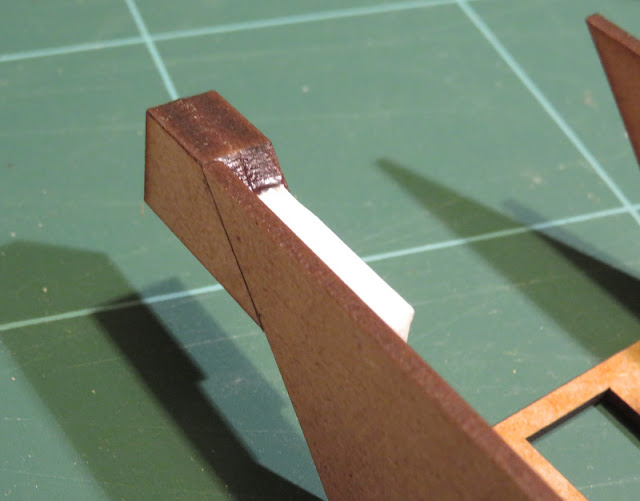 One thing I really didn't like is the chimney, which is designed to stick on top of the roof. Well firstly that tends to look like it's just stuck on top, and secondly chimneys are usually built up a gable wall where there is one. So I stuck the chimney to the top of, and flush with, the gable wall, reinforcing it from underneath with an off-cut of foam-core. Incidentally I used Micro Krystal Klear glazing glue for much of the kit, it's essentially a very sticky clear PVA with a quick grab and I had a pot on my workbench.

Moving the chimney meant trimming the roof around it, but as well as that I trimmed about 2mm from the depth of the roof and 3mm from one side as it seemed to me it overhung far too much. I then added the barge-boards to the outer edges of the roof, flush with the top. 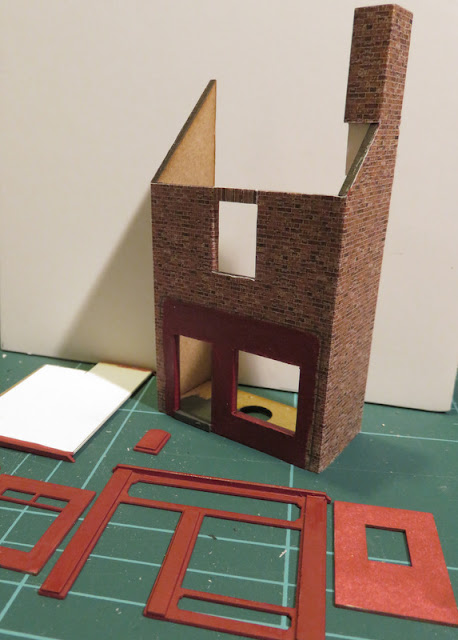 I decided on a brick finish, I used a brick-paper downloaded from Wordsworth Model Railways, which I think are rather good, and they are free. I printed it on a laser printer which looks good, but a bit shiny. The shop front was assembled and along with the window frames, and barge-boards, were painted a deep red-maroon, I also painted the wall corners within and behind the shop front. To get rid of the shiny brick and any traces of gloss in the paint I sprayed the lot with matt varnish - Testors Dullcote in this case - this must be done before glazing is fitted.

The roof was covered in York Model Making slates, I had some left over from Hexworthy's station building, and I think they work very well in this scale. Such a small simple roof was easy to cover. Learning from the station I ran the slates over the barge-boards - trimming excess off with a sharp knife afterwards, and overhanging the bottom edge of the roof slightly. 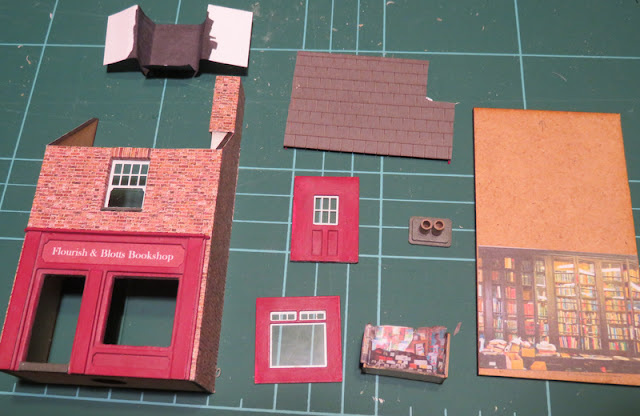 Before final assembly I found some photos online of bookshop interiors, which I printed out along with a sign - it took me a couple of attempts to match the colour to the paint - but I'm very pleased with the result. It was simply stuck to the back of the shop front before it was stuck to the building, while the bookshop interior photos were stuck to the window display (which fits behind the shop window), and the back wall of the shop. The chimney pots were cut to length - a little fiddly to cut square and equal length - and stuck to the top of the chimney and painted. Assembly of the windows and door is straightforward, but worried that the upper window might look through to the downstairs, I formed a paper "blank" to go behind it and coloured it black. 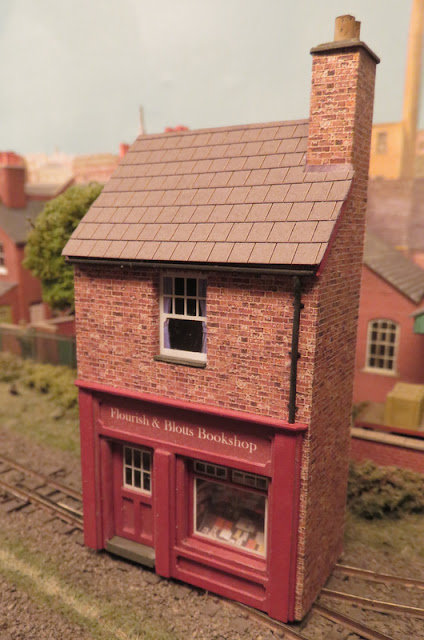 So here's the final, assembled building. You will see that as well as the interior photos, I've added a couple more details not in the kit. The gutter is simply a strip of 40-thou plastic just wide enough to protrude from below the slates, and with the front lower edge sanded to a curve to look like a gutter. Good cheat eh? The down-pipe is 40-thou plastic rod with the end bent, and a few tiny microstrip brackets stuck on, and stuck to the gutter with solvent. Painted matt black it adds realism. I also decided to add flashing around the chimney, which was simply paper coloured with a grey Sharpie pen (borrowed from the kids), then cut to shape and stuck around the chimney. The stepped flashing up the side was a little fiddly to cut. You might also notice the curtains - more paper and Sharpie pen! 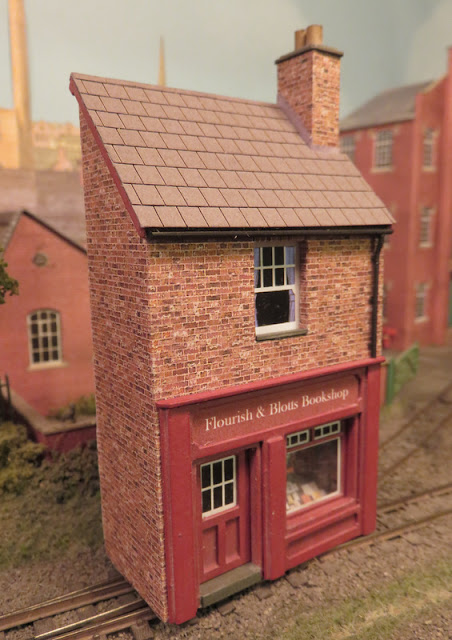 I'm really pleased with the finished shop. It's a small building, just 55mm wide, the door is 25mm high so looks OK as an old building. The matt-varnished brick looks great, and in this scale is probably more realistic than embossed plastic. The shop front has nice relief, although the windows sit a little deep they look good. I'm glad I moved the chimney and cut down the roof as I think it looks much better for it, while the added details bring it to life for not a lot of effort. Maybe it could use a little subtle weathering, though I'm not sure how best to treat the paper roof slates. 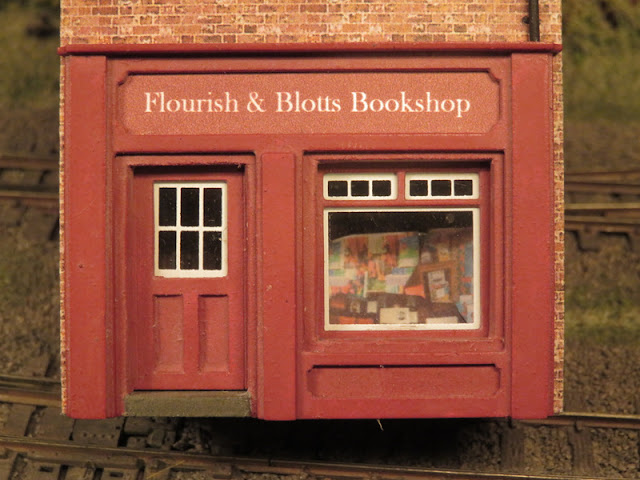 You can't see much inside but there's enough to give an impression. There's a hole in the bottom for lighting cables, and the back is still loose for now (but a tight enough fit to stay put) so they could be fitted later. Extra marks if you recognise the name.

So I am very impressed with this little kit. Yes it needs wall and roof finishing; you could used embossed plastic (Slaters) on the walls or even just paint, replace the rood with a Wills plastic sheet, and adapt it to whatever finish you like. So it's not a complete kit and the finish is down to the builder, but it's not hard to do and I think many will like that flexibility. It also benefits from a little thought in assembly and added details. I think the chimney could be better designed integrated into the gable, the roof less overhang, and thinner MDF would make the windows less deep, but these are minor points. So I can see me building some more of these little kits.
Posted by Michael Campbell at 00:13

Several people have recommended Petite Properties to me recently, but it's nice to see an actual finished one, and a really good model you've made of it. Your comment about thinking and not slavishly following instructions is really good advice Michael. Don't think I'd have bothered if the chimney pots weren't exactly the same height, after all one could have been replaced with the nearest match after storm damage.

Several people have recommended Petite Properties to me recently. But it's nice to see one finished, and what a really good job you've made of it Michael. Very good advice about thinking ahead and not slavishly following the instructions. Don't think I'd have been as bothered about the chimney pots being exactly the same height. After all you could put it down to one being replaced after storm damaged.

I love these kits, but they are very much models for modellers. You need to put quite a bit of yourself into each one, but some of the work has been done for you. You'll get an attractive and well-proportioned building, but one that is unique to you.

It looks good, and I think the deeps windows look fine in a old building selling spell books.