Yes, I have been busy with trees and grass again - but this time for Awngate. There's not a lot of greenery on the layout, but what there was wasn't that convincing. So I set to with the dilute PVA glue, static grass and the Noch puffer bottle, adding layers of the static grass over the existing flock. I wasn't that impressed with the grass effect on Landswood Park, but over the (slightly) larger areas here it seems to have worked more effectively. I've blended in longer yellowy grass over a greener grass, which I think has been reasonably effective. 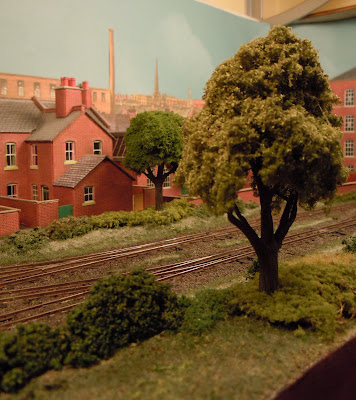 The trees were described a couple of weeks back, they have had extra flock added to give variety of colour, and have been planted to create deliberate view blocks to the scene. Hopefully their placement will look natural, add visual interest, and by splitting the scenes may even make the layout appear bigger. A few more bushes and extra texture to the existing ones has helped too. 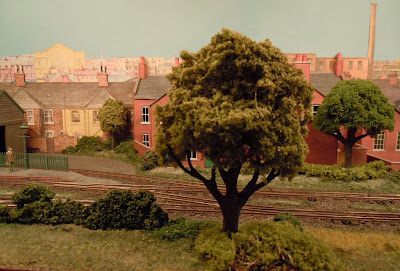 Where the engine shed doesn't (yet) stand I have grassed over the end of the siding, and a large bush from rubberised horsehair and ground foam flock helps to disguise the end of the layout. This corner is barely visible from normal viewing angles anyway, so the engine shed can wait for another time. Anyway, I'm stuck for ideas as to what it should look like. 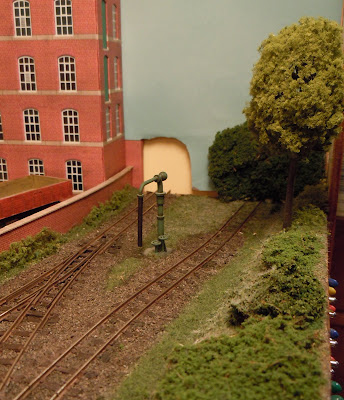 I think the result is that the greenery is less "flat" and is much more convincing than it had been, and the track blends it better. Next a few more details are in order. 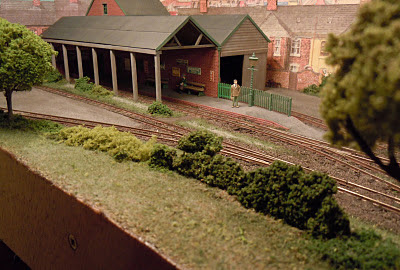