A spot of fencing and some gutters

It is the subtle details of a model that make it feel more complete, and hopefully more real. The lack of some details is not always obvious, but the mind knows something is missing. Something I felt was lacking around Awngate station was fencing, even though the line represented is a tramway where the railway had it's own right of way - such as this semi-urban terminus - it would have been well fenced off.

Some digging around in my stock of useful bits revealed some lengths of Ratio fencing. So the field along part of the front of the layout has post-and-rail fencing added, carefully bent to follow the contours of the ground and boundary. Beyond the tree towards the road (on the backdrop) this changes to iron railings, assuming the neighbouring property is a building rather than livestock. Compare the view below to that in the last post. The rest of the front is left as open ground as I like the eye-level views of the trains, I'm assuming the land was bought in irregular-shaped plots and so the boundary there is further from the track. 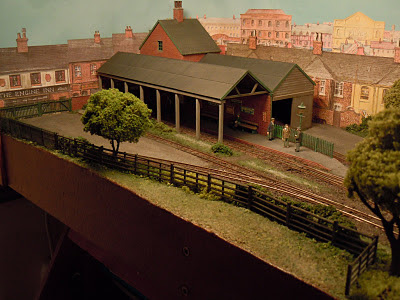 I've used more of the railings at the back of the station, separating the access path to the houses from the railway property. The Wills railings are moulded in plastic, but are not only as fine as any etched railings I have seen, they don't look as flat as etches, and are not as fragile as you'd imagine. Amazing really. I'm not sure how long the fences at the front of the layout will last though! 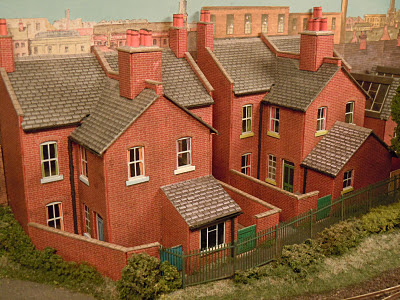 You may also notice that the houses have gained guttering and downpipes, after someone on the NGRM forum suggested they would be a good addition. He is right, they do add relief and visual interest to the card kits, although it would have been a lot easier to have added them before the houses were stuck in place! Again it was by bits-box that provided a pack of Wills building accessories, the gutters are half-round rather than hollow and the downpipes a "D" section but for the back of the layout who would know? This is another detail that is subtle, but missed if not present.

Posted by Michael Campbell at 13:28