At home the fiddle yard consists of a 5 inch wide plank on which cassettes can be connected to the layout, however I had previously made an extension that could be bolted on the back to provide extra storage space when there isn't a chimney breast in the way! However after the first (and so far only) exhibition for Awngate it was clear that, despite the extension, there was insufficient space for organising the cassettes. Hence the addition of the "spice rack" shown below, providing space for two train cassettes to be stored above, which was simply knocked up from some offcuts of MDF and hardboard. 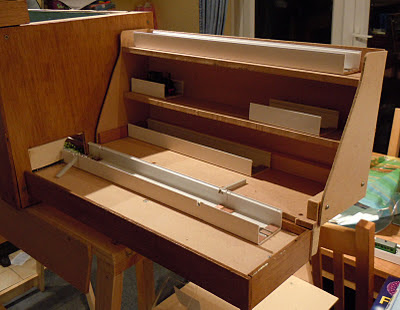 The other problem experienced is that when picking up cassettes the trains tend to run out the end. I made up pieces of plastic to slot in, but that was fiddy to do. So I used the same idea I had with the 014 cassette for Landswood Park, by having pivoted barriers at the end. The barriers are cut from a length of plastic section (square in this case), slots cut at the ends of the cassettes, and a pivot made from a length of paperclip wire passed through a hole at one end the barrier and glued under a lip inside the cassette trunking. Simple to make, simple to use, hopefully effective! 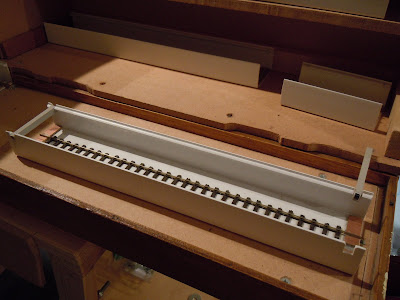 Here's a close-up shot of a barrier in the open position. I didn't bother with loco cassettes as they don't tend to roll, and they have less clearance. Also visible here is that the lead track has a couple of whire whiskers just outside the rails, these have been added to help with alignment. 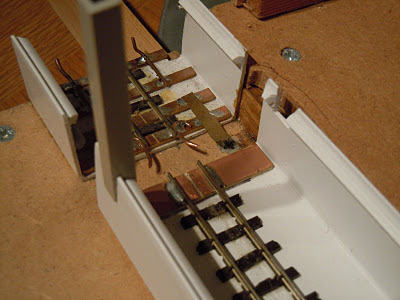 Posted by Michael Campbell at 12:56