We last saw the O&K complete but in bare whitemetal. Painting started with a coat of red oxide primer, followed by a patchy wash of rusty brown, the buffer-beams were given a coat of red then masked off. I wanted a well-worn look for this loco so tried the salt over water again, plus a few blobs of PVA in places I wanted more rust. 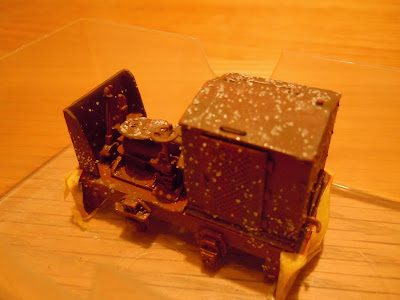 The top coat was a light green enamel from Halfords. It took a while to get the salty bits to break away despite soaking the model in water, perhaps this technique works better with acrylics? The PVA was stubborn to remove too (maskol would have been better if I had any!), and so in a few places bare metal now showed through. Maybe an etch primer would have been a good idea too..

The green was also really very shiny, and rather lurid, in fact at this point I wondered if it were a good choice! So the panels were burnished back with a fibreglass pencil. Always do this over a tissue, afterwards fold and bin the tissue so you don't get bits of fibreglass everywhere, they are irritating if the get in your skin! 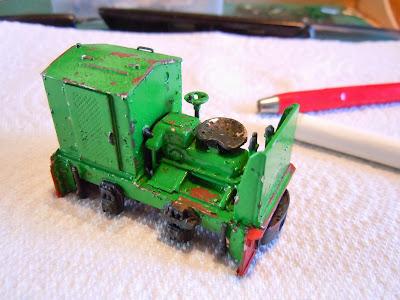 There then followed touching in the red bufferbeams, black details, and rusty red/brown over the rusty patches and any shiny bits. A wash of well thinned dirty brown dulled the paint further and collected dirt into the nooks and crannies, a darker wash filled the grilles. Finally a dusting of weathering powders and a coat of Testors Dullcote matt varnish completed the painting process. 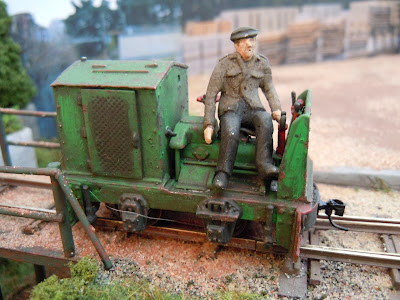 The result is as hoped, a dirty and slightly rusty machine that has had a hard life, but still in use. The effect over the grilles didn't work as well as I'd hoped, but the final shade of green is rather nice. The driver is of an unknown source (from a friend) and isn't the most detailed, but is much better than the driver that came with the kit! 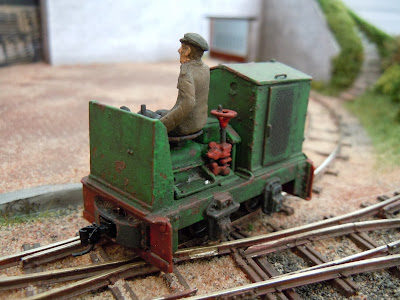 It's funny how you only notice things like the silvery hair and that small white particle on the footplate in the photos afterwards isn't it? 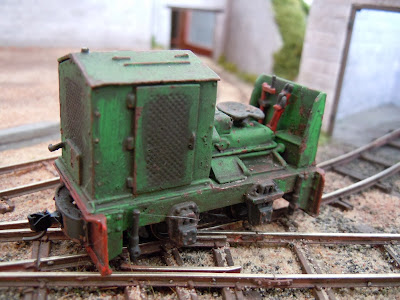 All looks good, though I admit I haven't actually had time to test it works since reassembly yet!

Posted by Michael Campbell at 23:42