I escaped from packing the house up this afternoon with my son to take a trip to the Uckfield show. The Uckfield MRC always seem to put on a good show and feature narrow gauge layouts, and this year did not disappoint. Admittedly I had seen several of the layouts before, which is no surprise as I visit as many NG shows in this corner of the UK as I can, but they are all top layouts and there was plenty I hadn't seen. 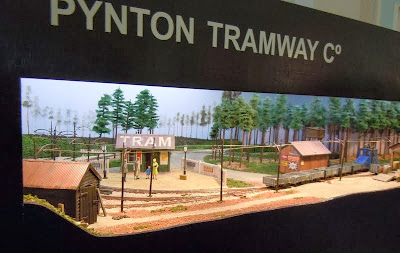 I've heard and read about Christopher Payne's Pynton Tramway Co. on O9, featured in Railway Modeller a few months back, but this was the first time I'd seen it. As with all his layouts he has made a good job of presenting it, as well as superb scenery and fascinating trains - it runs well too. I had an interesting chat with Christopher about lighting, as he'd just installed some strips of LED's across the layout to supplement low-voltage halogen bulbs at the front. I think the result works really well with the LED's giving a good even light with the halogens providing the warmth of a sunny day. 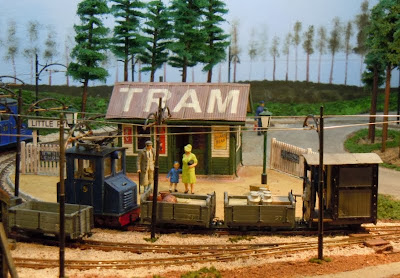 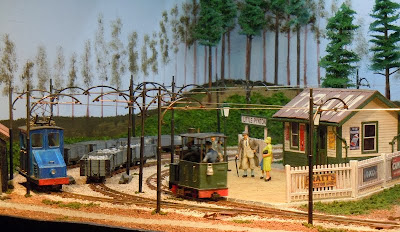 Also present was Des Trollip with Zebediela Citrus and his "Pizza", Southern Cross Sand & Cement, both in 009. 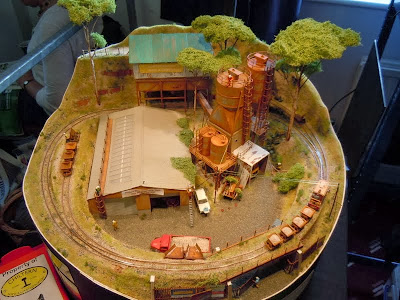 Tricky to see due to the crowd was Giles Favell's The End of the Line in O / O14, another one I have seen before but fascinating to watch two trains of different gauges and a road lorry all moving at once! 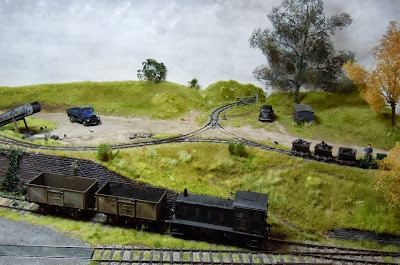 There were a couple of other NG layouts too, there were some SG layouts as well (once again the P4 layout could be spotted as the trains derailed!) and some very good trade support, but it was great to see a "mainstream" exhibition showing that narrow-gauge layouts can steal the show!

For more photos follow this link.
Posted by Michael Campbell at 23:51