I've got a sinking feeling...

Yes, sorry about the title, but I have been asked to put together a model of the Titanic. It's a bit different from the usual models I make, but it's a plastic kit so the methods of construction are quite familiar. The story of the Titanic is fascinating as well as tragic, and there has been a lot about it recently - this being the 100th anniversary of its maiden and final voyage.

The kit consists of a hull, a bag of motorising parts, and three sprues of moulded parts ranging from the decks to the tiniest of ventilators. To be honest I was surprised at the number of small parts, particularly given the small scale of this model - a person would stand 2.5mm tall. Looking at it another way this model is around 15 inches long, if modelled to my usual model railway scale of "00" (1:76) it would be almost 12 feet (3.6m) long, longer than a full-length express train. That really gives me an idea of the scale of the size of the Titanic, and how it would have been seen in 1912. No wonder they thought it unsinkable. 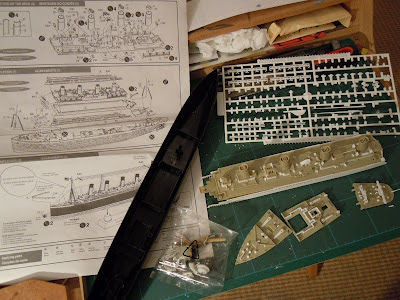 As you can see I have made good progress with the superstructure although there are a number of parts left to fit. The exploded diagram at the top of the instructions shows how many small parts are in each step, there is another page of those diagrams on the other side! However the next step is to tackle that small bag of bits in front - fitting the motor!

Posted by Michael Campbell at 23:31