A tale of two magnets

You might remember a little while ago I bought some magnets: 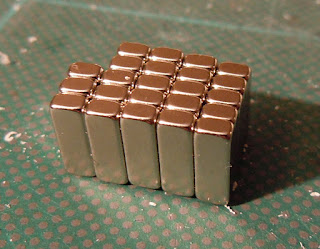 The idea was to use them to replace some of the cupboard catch magnets under the track on Awngate, as some were not working very effectively. To space them sufficiently far apart I used a steel nut that happened to be a suitable size. 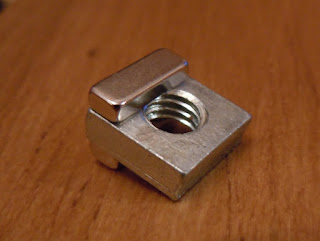 The magnets were then affixed under the track in the existing hole, having removed the old magnet. The picture below shows the new magnets and nut (right, the blu-tack was holding it while the glue set), with an old pair of cupboard-catch magnets (left). The difference in size is apparent! 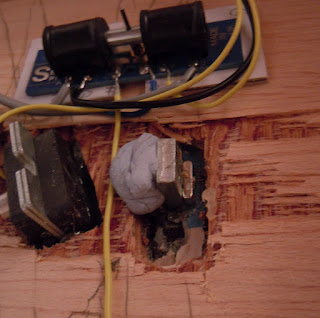 Sadly this didn't work as well as hoped, although the couplings swung over there wasn't enough pull to separate them when coupled. Also it had proved tricky to centre the magnet under the track. However my experiments on the workbench had shown good results with the magnets to the sides of the rail, so I cut away the ballast and the ends of one sleeper outside the rails just enough to slide a magnet in. This went down to the baseboard, as the track is laid on 1/16-inch cork the magnets on edge sat level with the foot of the rail.


The picture below shows how unobtrusive this is - the front and middle tracks have had the new magnets fitted - again one has blu-tack to hold it as I made the hole too big. This proved to be much more effective than mounting them under the track. They have since had a few grains of ballast on top and to fill any gaps, and have been painted to match, blending them in nicely. 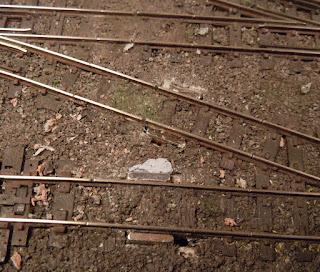 If these work better in-use than the other cupboard catch magnets I might replace some more, it wasn't too hard to do. In any case, it's useful to know for future reference, as no baseboard holes are required.

Posted by Michael Campbell at 19:13