The star attraction at the Great Electric Train Show was Pete Waterman's Making Tracks model of the West Coast Main Line, built for display at Chester Cathedral earlier this summer, and I was keen to see it. I will admit I was slightly underwhelmed, although it was an excellent model that captured the look of the WCML the details were spread along its immense length, and so it was a little dull between trains, which whizzed by at mainline speeds! Impressive, but I guess not my kind of layout, and my photos all have blurred trains. Actually, quite a few of the layouts were large tail-chasers which I guess is what a lot of people want to see, but I'm attracted to more compact layouts with character. 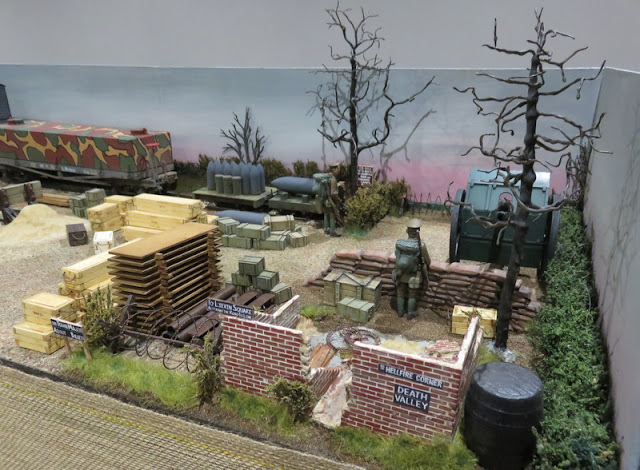 So I'll start with the only other narrow gauge layout present, the SM32 layout 4000 Yards by the Norfolk Model Railway Syndicate. Big scale and a modest layout size meant it was a little cramped, but the stock was nicely modelled and the available scenery well detailed and observed. The DCC sound was a bit loud though! 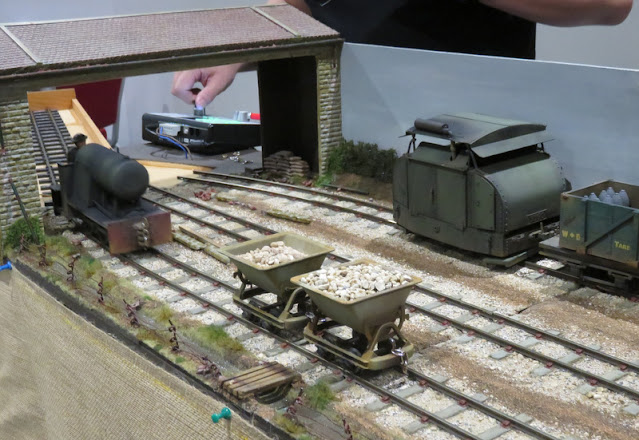 Foldham is a compact OO gauge layout shown by the Double O gauge association, which still had enough operational interest and scenery in its limited space to show what could be achieved in a small space. 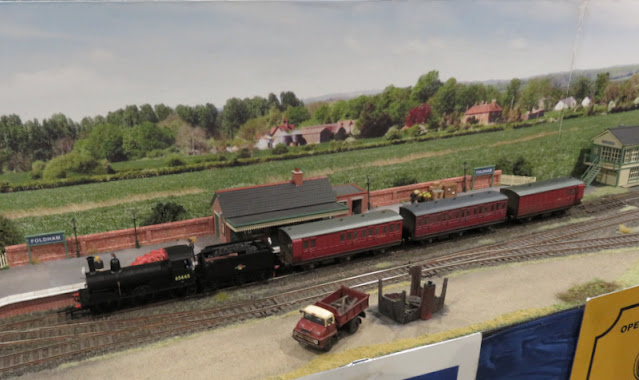 Humphrey Road Sidings (OO, Norman Raven) is unusually depicted in winter with snow, which was well done. The scenery included several Petite Properties - I was spotting those I used on Loctern Quay, albeit with quite different finishes. 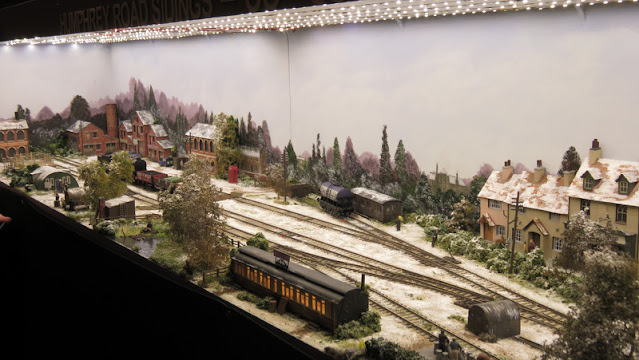 North Cornwall Brewery (OO, Malcolm Briggs) depicts a brewery railway, and has well modelled buildings. I found this detailed scene including building site and garage fascinating, even though there are no trains in this scene! 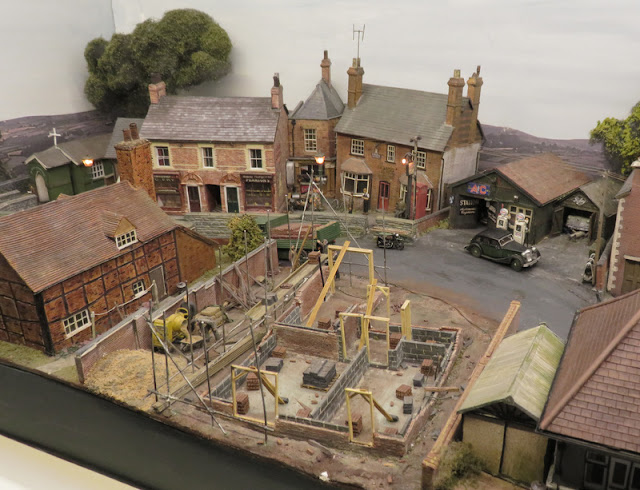 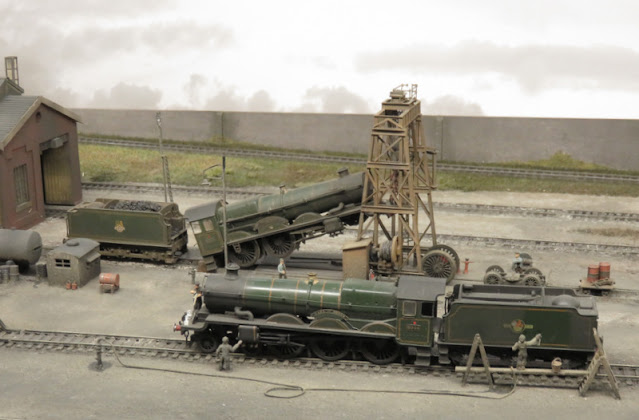 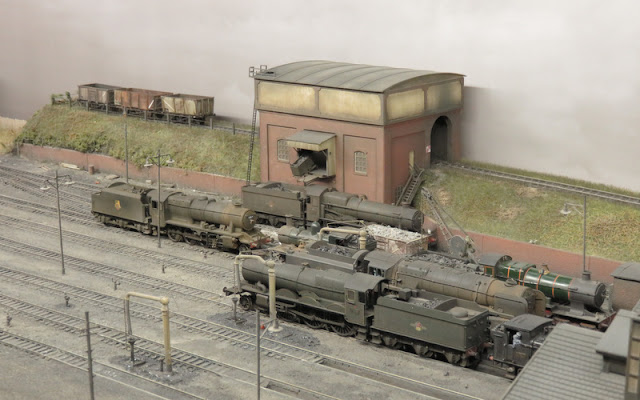 I also liked Old Elm Park (O, Mark Pollard) because it included the inside of a roundhouse, as well as the outside yard tracks. However, while looking into the gloomy shadows was atmospheric, it did make getting a photograph very difficult.... 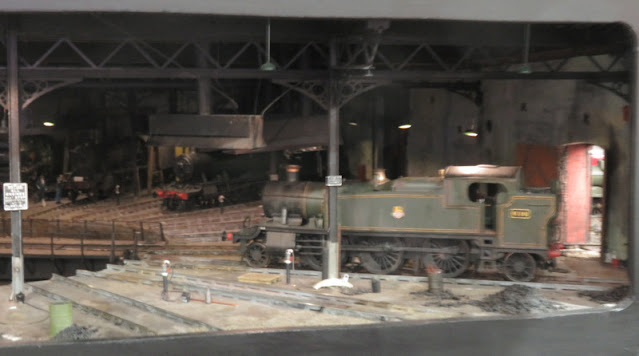 The outside yard was a little easier to photograph. The layout is viewed at eye level, really adding to the depth.

I did a double-take when I saw Portsea (3mm scale/TT, Paul Hopkins) since it is so recognisably Portsmouth Harbour station. The rest of the layout includes a portrayal of the Town station too, along with other local features - including elements of the naval dockyard - just not in the right places, hence the name change. All very nicely modelled in this nice scale (lots of scratch-building) - and some lovely boats too. 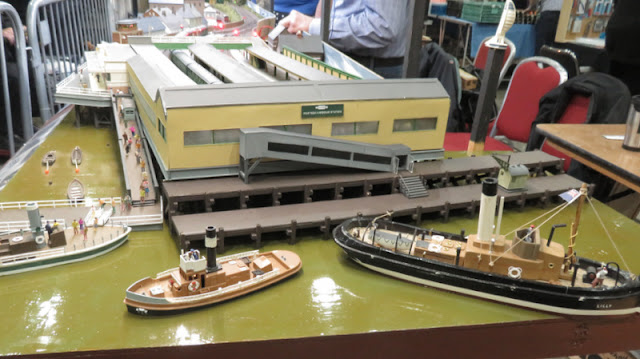 The layout also hosts a visit from the Queen... 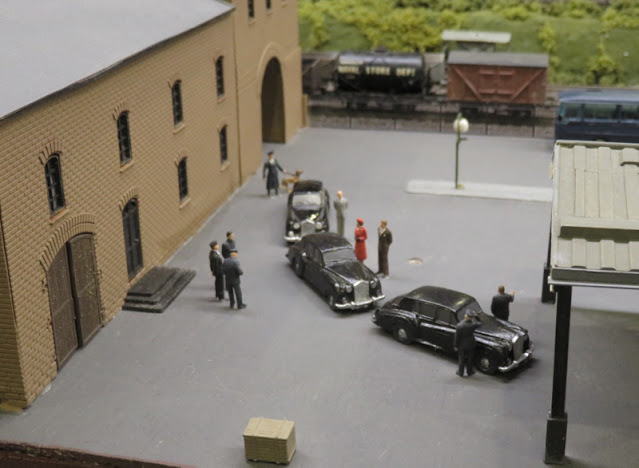 Arrowmouth (OO, Redditch model railway club) showed a mainline seaside station, I particularly liked the modelling of the town, including this riverside scene. 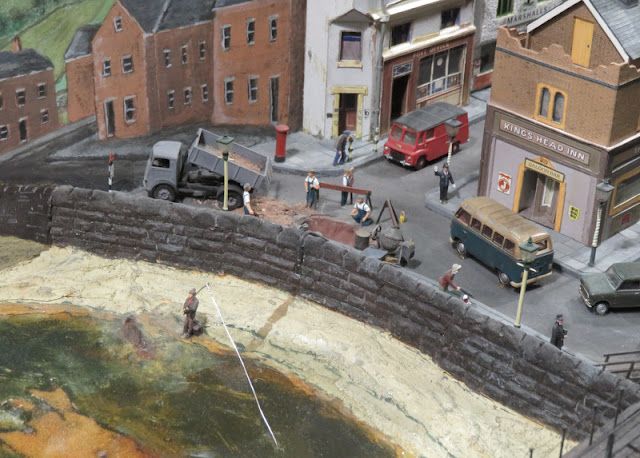 Little Burford (O, Michael Hickling and Dan Evason) depicts a GWR branch line station, and although compact for the scale the modelling is rather fine, with trains and scenery to a consistent standard and subtly weathered. 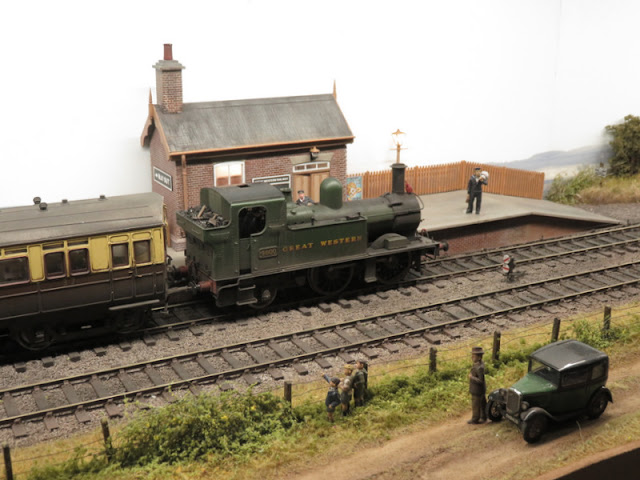 Whithorn (OO, Alisdair Macdonald) featured delightfully modelled scenery on deep baseboards with a well-painted backscene and effective presentation. It was another layout with a crowd all weekend! 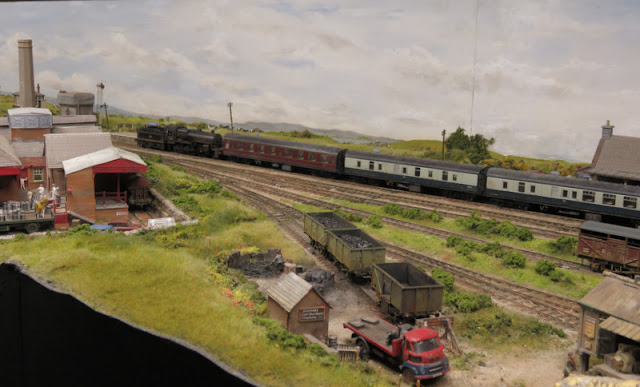 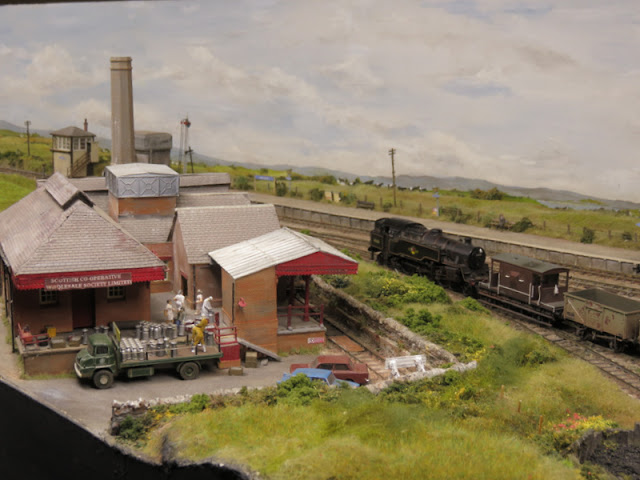 That's just a snapshot of the many layouts, and there was loads of trade too - albeit little for the NG enthusiast. It was great to see a big exhibition again and the crowds suggested lots of others thought so too - lets hope other exhibitions are able to follow.
Posted by Michael Campbell at 00:17