This is an excellent time for 009, with several ready-to-run models now available, including locos from Heljan and Bachmann as well as several suitable Minitrains locos. I got a Heljan Manning Wardle because of my early narrow gauge inspiration - the Craig and Mertonford, and because they are elegant locos. The WD Baldwin is, on the other hand, not a pretty loco, and maybe I'm shallow when it comes to choosing my NG locos, but it is a versatile choice for a model - hundreds of these locos were built and they ended up on many railways around Britain, and indeed the rest of the world too. So actually on a freelance narrow gauge line a Baldwin will look at home, but the Manning Wardle will forever be associated with the Lynton and Barnstaple. 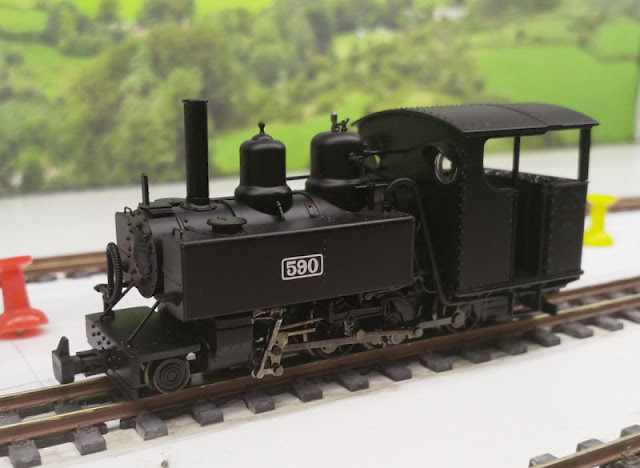 So when I spotted Rails of Sheffield were selling the Bachmann model at a bargain price I thought it would be rude not to get one. This is the Welsh Highland Railway version, in plain black. It looks very finely detailed, cleverly designed with daylight visible under the boiler, and blackened valve gear (hurrah!). It runs well too, though not as smoothly as the Heljan - I suspect the coreless motor doesn't like my controllers - but it does stay on the track which is more than can be said for the Heljan loco out of the box!

Since I'm not modelling the WHR I'll loose the "590" on the side (any suggestions how to get it off?), finishing as a generic black loco - perhaps with a nameplate - will mean it will look at home on any model set from the 1920's onward. I'll probably dull down the black a little, it looks a bit plasticky to me, but  only lightly weathered to serve as a preserved loco on Hexworthy, while still passing for an industrial loco if I need it to. At least that's the plan. It won't be easy to paint though with all that detail, and no apparent way to separate the chassis, so might need some thought first.
Posted by Michael Campbell at 22:59

Thanks for your considered suggestion, valued expert! :)