Tests with Stones and Windows

Not happy with the moulded stonework sheets, and not having had great results with clay before (except for cobbles), I've decided to experiment with foam sheet - and scribing the stones by hand - as I've seen others do this with impressive results. 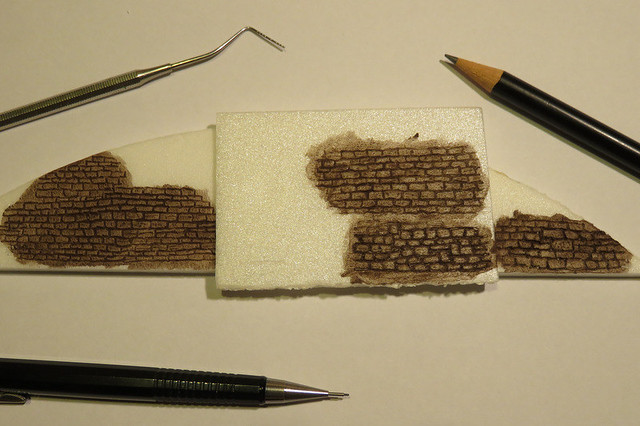 The lower piece is a pizza base, the oblong piece on top centre is from a pack of foam I picked up years ago, I think it was marketed by Busch or Faller though I've not seen it since. I've looked for the blue foam others have used but can't find a local stockist. It can be found on ebay or online but can work out pricey with postage, and I fear it may get damaged. Anyway both these foams seem to work OK and I don't need a great deal.

Also shown are the implements I've tried. The right-hand and lower of the centre areas were done with a sharpened HB pencil, but I think the courses are too thick for 4mm scale. I guess mortar is an inch or two thick at most in a stone wall, so well under a millimetre. The upper centre and lower left were done with a 0.5mm propelling pencil, which I think looks better. The top left corner was done with the dental implement but I found the long point difficult to control.

So a promising test, though I suspect my stones are a bit too regular. I gave the test pieces a wash with brown acrylic. Looking at the way this has collected in the mortar courses I think I'd be better starting with a wash of grey, then dry-brushing browns on top. I've seen pastels used with great effect for stone colouring, so I might even give that a go. 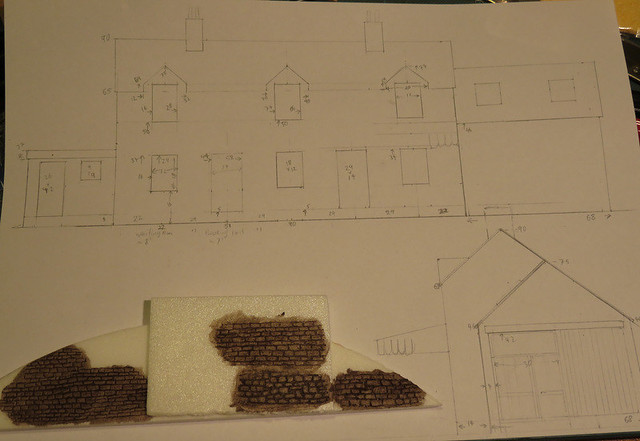 I've drawn out the station building, reducing it's length by 20 mm, which I think will look better. It's marked up with measurements - as I can't draw lines all over the foam and rub them out, this will help me mark it out neatly.

The next big question is windows. Top we have a moulding by Dornplas, nice and fine but lacking detail - they don't look like sash windows. On the right is a Wills set, the lower ones of which look really nice - but only two on a fret so I don't have enough and I'd need several packs! Sadly the others, like the Dornplas ones, lack sash detail. Those lower left I picked up from a second hand stall, but I think they might be Peco. They have nice sash detail, though the mouldings are a little thick - I tried thinning one with a fine file but I'm not sure it improved it, just made it wobbly!

I've noticed some nice ones from York Modelmaking - a bit pricey though:

The other option is of course making my own. I've done it before but it's fiddly, and I'm not sure I can do better than these.
Posted by Michael Campbell at 23:12

I used a plywood shell and Das clay many years ago to build the Quarry Hospital at Dinorwic.Somewhat different technique needed, but the bit I would recommend is constant reference to photographs. Of course, you don't have a direct prototype, but having a constant reminder of the 'Dartmoor' stonework you're trying to represent is, imo, essential.

Stonework is one of those tricky subjects where we all 'know' what it looks like, but it's actually much more subtle than we realise. I was recently living on the geological boundary between "Cotswold stone" and ironstone and took these pictures: https://www.facebook.com/cjsmith61/posts/10211732642449838?pnref=story the different appearance between the two types of stone (regardless of colour) was striking.