I did buy a can of primer last week, but I haven't got any further with painting the coaches, instead moving on to another project! This is the Chivers kit for a Kerr Stuart "Skylark" that I got last month, along with a Kato chassis. On the face of it this is a reasonably straightforward white-metal kit that should fall together over a few evenings, right? 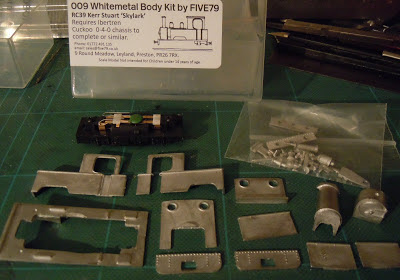 So here are the main parts, nicely moulded on the whole with just a little flash. It is always tempting to see how with a little extra work the end result can be improved, for example here I couldn't help thinking that the cab-side doors were a little unlikely and would look a whole lot better opened out - you can see I've done this to the right hand side already. 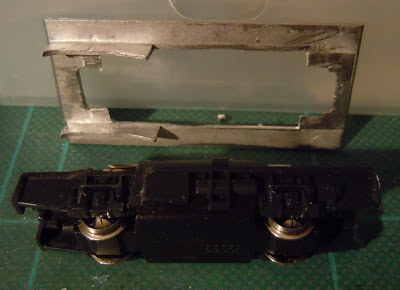 The more immediate challenge is fitting the kit to a chassis it was never designed for. Actually it isn't too hard, the footplate needed the opening extending under the smokebox, and the chassis having it's plastic footplate and side detail cut back to slide into the dummy rear frames of the kit. There were also some bocks cast under the footplate to sit on the Ibertren chassis it was intended for, which I have had to cut away, and with a little fettling the chassis slides into place. 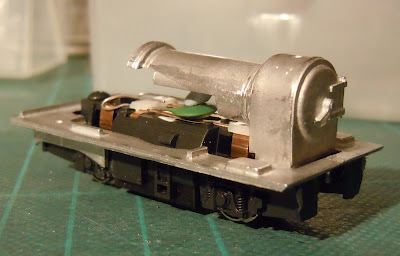 The Kato chassis is low but long, and protrudes under the smokebox, the front support to the boiler has needed a recess cutting into it. On the other hand, much of the "missing" boiler that would have fouled the motor of the Ibertren could now be reinstated! I should point out that I will be building this as a tram loco, and the chassis will be completely hidden behind skirts. 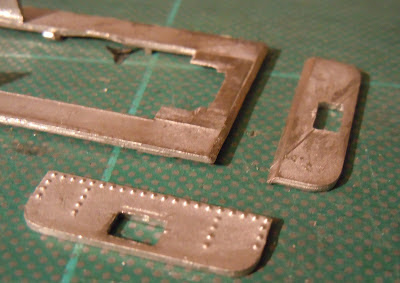 Another minor improvements is to the fit of the buffer beams, if slotted under the footplate as intended the rivets fall too low and the bufferbeam is very close to the rail. The best solution seemed to be mitring the join, as shown  here. I've also had to open out square holes to take the Microtrains couplings I use.

Well I'm a few evenings in already and so far I have just cut and filed lots of metal, and sliced my finger and thumb open. You know that rule about always cutting away from you?

Posted by Michael Campbell at 23:57

Still have a scab on my thumb from forgetting the cutting rule!