The last few evenings have entailed the fiddly detail work that complete the coach, it takes time but it is enjoyable and well worth the effort. As "freelance" coaches there is no prototype to copy, which means looking at photos of similar coaches to figure out what the details should be - in some ways this is more of a challenge than copying a prototype!

So the balcony railings have lost the spikes and gained a plasticard "wooden" rail instead, I've copied the prototype step from the last post to the other 7 corners, and made a stab at the under-frame truss rods. The vertical supports are in fact solid across the coach - cheat I have seen others do and is virtually invisible from normal viewing angles, while making them strong enough. The truss rods are brass rod with a short piece of wire insulation representing the tensioner. 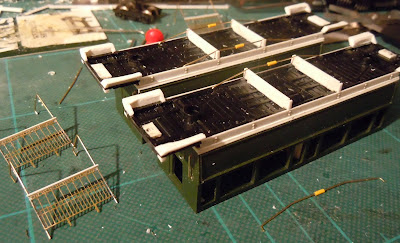 Moving on to the roofs, I decided that oil lighting was the most likely and fortunately I had some spare Parkside Dundas sprues with some on. The take a little cleaning up but look OK, and save some fiddly work! Two per compartment looked far too generous so I stuck to one, and I quite like the unequal spacing on the brake coach.

A cruel close-up of the brake coach shows how the under-frame and steps look - not too bad I think. I'm particularly pleased with the detailing around the guards compartment door, hopefully it now doesn't just look like it was scored into the side of the body. 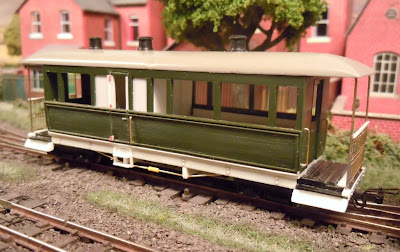 Another close-up showing the ends of the coaches, the steps, and buffer-beam overlay. I'm rather pleased with the way the balconies have come out. I've yet to fit the couplings - in fact I haven't cut the Bemo style couplings off one set of bogies yet. 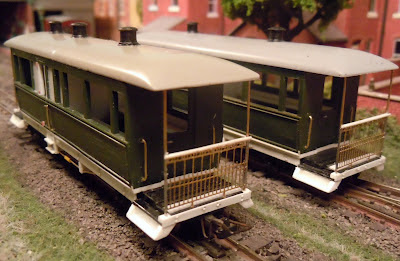 Talking of bogies, they are too modern really but since they are barely visible I can't see the point of changing them. I've also omitted brake gear - I'm not sure what it should look like and most of it won't be visible either. I did think about fitting vacuum hoses but the castings I have domintated the balcony ends, I'll look out for something smaller. So for now I think they are about ready for primer, which will show up any imperfections.