A little bit of skirt...

Apologies for the title on this post, and to all those who don't find what they expect within it!

For those that are still reading, I am of course referring to the tram skirts for the Skylark. Using the cheap and reliable Kato chassis means it's diesel outline frames and incorrect wheels need hiding, and since Awngate is supposed to be a tramway tram-skirts are completely appropriate. My supposition is that the tramway company approached Kerr Stuart for a "standard" loco rather than order a bespoke (hence much more expensive) tramway loco, and simply had them add skirts around the moving bits. 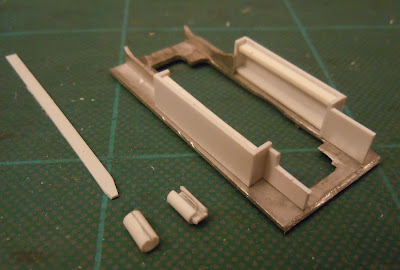 They are made from plasticard, which is straightforward enough, although it has taken a little while to get the proportions right. The box section represents the skirts, with an extension for the front frames.

Looking at photos of Skylark locos the cylinders appear very small. Indeed at 12" stroke by 7.5" bore they are small! I reckon that would make an outer diameter of around 12" over cladding, or 4mm, but I only had 3mm diameter tube. So I cut a slit in the back, and pushed a strip of plastic in, widening it to about the right diameter - at the front at least! The back is flatter, but that makes them easier to stick to the frames, not being the full depth is not really visible and indeed is helpful as the frames are further out than they would be. 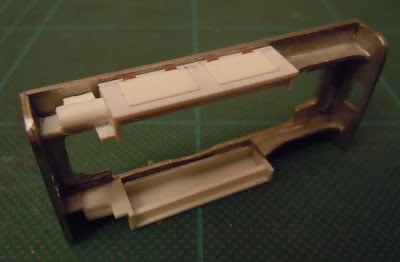 A little extra detail - bolts on the ends of the cylinders, and access hatches for maintenance of the motion - and the skirt/frame/cylinder assembly is glued in place with epoxy, along with the buffer beams. The result works rather well I think, hopefully the rear wheels appear as the pony wheels under the rear frames. Right, now on with the body...