A load of old cobbles!

And so to a job I have been thinking about for a while - laying the cobbles in the farmyard. As this covers the entire ground of the layout, including the track, it is pretty critical to the look and operation of the layout to get it right! Now I have read on the NGRM Forum and also Chris Nevard's Brewhouse Quay of using DAS clay for inset track. I last used DAS as a teenager for stone buildings but never got the stonework looking right, but that was some time ago so why not give it another go?

First as you will have seen previously the area between the tracks was covered in thick card up to sleeper height, then any gaps between the sleepers were levelled with small pieces of clay. I wanted to cover right up to the buildings, but didn't want to get them messed up, so gave them all a "skirt" of paper. This may not have been necessary as no doubt the clay could have been wiped off, but remember some of them need to be removable. Then the clay was rolled out to a thickness of about 1.5-2mm, cut to approximate shape (some paper templates were used), and laid onto a layer of PVA. The idea was to have the ground surface just below rail height, so as not to lift wheels off the track and to allow the rail head to be cleaned. 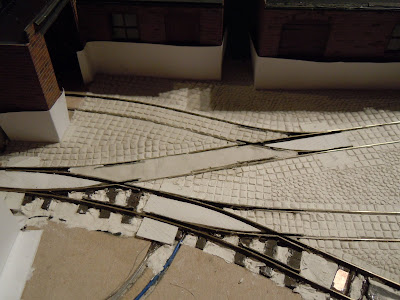 The picture above shows the clay being laid, that between the tracks in the centre has just been smoothed into place and is having the flange-ways  opened out. 014 standards a fine-scale so the flange-ways are mercifully small, especially having been so used to 009! The dark clay beyond has just been laid and embossed with setts, while the lighter clay to the right has already dried. There you can see a mixture of setts (mostly around the rails and doorways) and cobbles, exactly as I saw at Tatton and something I wanted to reproduce. Cobbles help with the rural farmyard feel, setts throughout would have felt more industrial to my mind. 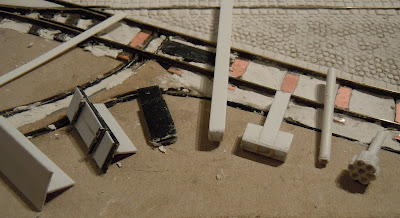 I embossed the clay whilst damp using a variety of home-made tools, shown above. On the left is a flat piece of plasticard with handle, sized to fit between the rails, used for smoothing and levelling the clay. Next is another one with slots for the rails, and ridges for the flange-ways. The black one is also for clearing flange-ways to the right depth. In the centre is a square-section plastic tube, and next to it a block of three, with chamfered ends used to emboss the setts. These work out about a scale 7 inches square, probably a little too big but that's what I had to hand. On the right is a round tube, and a block of 7, also with chamfered ends. These were used for the cobbles, at about 3 inches scale size they are probably about right. 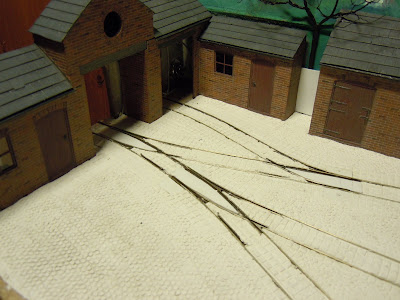 Embossing in this way was relatively easy, and gave a good result - but not too even. Even so, it took me three (long) evenings to complete this scene, only about the size of a sheet of A4 paper! I think it was worth it, the scene is really coming together now. Next up, painting it. And let's hope the track still works at the end of it.

Posted by Michael Campbell at 20:33

Great work on the cobbles here Michael. I've been looking at making my own from lots and lots (and lots) of cut plastrut cubes but this method looks pretty easy to do. The only question in my mind is what happenes if there's a track feed problem under the plaster? Would it need to be carved away?

I'm toying with the idea of magnetised panels of plasticard/drain covers etc covered in cobbled clay that can be removed to gain access to wiring etc. May be overkill though!

Thanks Christian. It took a little patience but was fairly easy, and probably quicker and easier than individual setts.

It is clay not plaster but yes, access to the track is impossible! You will see I used plasticard "chequer-plate" around points, which not only makes it easier around the moving points but it would be easier to prize up to access soldered joints. Other access panels/manholes over critical joints would be a good idea. I don't think magnets would be required, just stick them down with a dab of PVA and you will get them up if you ever need to.