The farmyard is now being "dressed" with the details that will make it appear to be a working farm. In the era in which the farm railway would have been used (up until the early '50s at the latest) coal would have been important to the working and domestic needs of the farm, such as household fire places, the blacksmith, the dairy, and steam traction engines. More obvious materials found in a farmyard are straw, and of course manure.

Coal is best modelled using ... real coal! I liberated some from my parent's bunker and smashed it up with a hammer until about the right size - old photos show lumps of coal that are surprisingly large, so not too small. A pile has been created by the tracks in the yard, probably the dairy is just off-scene. Manure is simply paster (filler) mixed up really thick and lumpy, with powder paints added for the colour. This was splodged around the animal pens, and a big pile added outside the barn waiting to be loaded into a skip and taken to a field! Straw is mixed in using long static grass in a suitable shade of yellow. 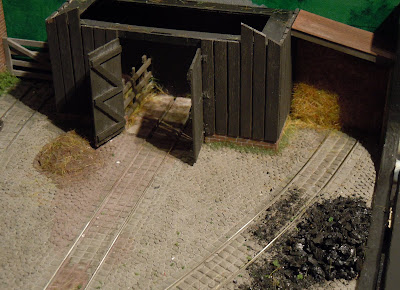 The photo above shows that I have disguised the end of the layout with a gate behind the barn, and a lean-to the other side containing the stocks of straw (or is it hay?). The barn has a pen inside. I've used more coffee stirrers for these. At the other end of the layout I have made another pen, this time using cocktail sticks and "chicken wire". You know those balls of netting that women have in the shower? I've no idea what they are for, but my wife's has a bit missing! 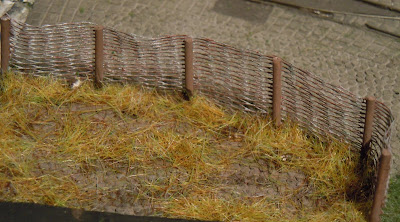 It has always been my intention that the rolling stock is very much part of the layout, so some of the wagons are recieving loads of the same materials (and traces of them when empty). The skips have plasticard false-floors, which in this picture are having the manure or coal added. The cling-film is to stop the loads sticking into the wagons, hopefully they will be a removable snug fit. 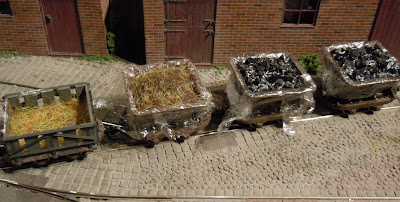