As I mentioned last time the points are controlled via wire-in-tube from slide switches mounted in the front corner of the board. Because of the cramped space and the short runs to the points this was fiddly to set up. Once the tubes had been stuck in place with a hot glue gun the points could be stuck down with Bostik.
The rest of the track was reasonably easy to lay, the copper-clad PCB strips cut to suitable lengths with side-cutters and stuck down with Bostik, the rail pre-cut and curved before being soldered in place using the KBScale roller-gauges. I used PECO rail joiners (fishplates) on the standard code 80 rail including insulating ones where the points face each other, as the track will be buried this won't get seen. Metal fishplates were soldered to ensure conductivity - it has never been a problem for me but once the track is buried that's it! Finally gap the copper clad sleepers and check with a multimeter. 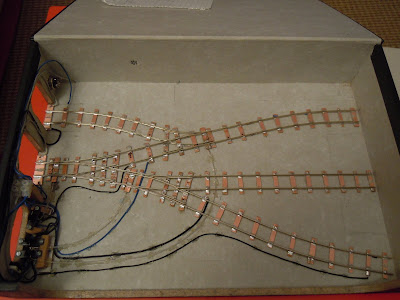 As you can see the wiring is in place too (apart from connecting up the socket). Grey for the rear rail, blue for the front, and black for the switched rails (frogs or vees). There is also an isolating section at the end of the front-right siding, as it looks a good place to park a loco if I ever want to. Not very likely but it would be hard to add it later ...
Wires go to the most convenient place to attach to the track, and will all be hidden by buildings at the end of the layout or buried under the farmyard surface. They meet in a terminal block that will also be inside a building. The wires and point control tubes are all stuck in place with a hot glue gun: quick, easy and strong. 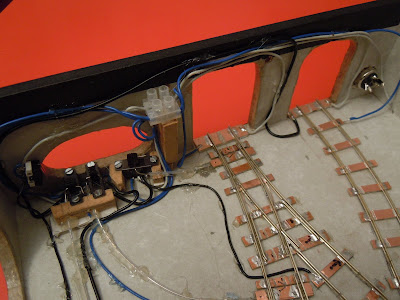 This close-up shows how the point control switches have been screwed in place with miniature screws, and how the operating wire is attached through a hole in the switch. Also seen is the wiring for switching the point frog (vee) rails, note that the switched feed for the first point also feeds the switch for the second. At the side of the opening (finger hole!) is the microswitch for the isolating section, I had run out of space for a proper switch.

Posted by Michael Campbell at 22:57

Been following this on NGRM, looks great. Look forward to seeing it at ExpoNG if you get it finished in time.